Additional federal funding for a new bridge across I-75 in north Cobb County and a stormwater project along Ponce de Leon Avenue in DeKalb County were among six transportation projects approved Thursday in a proposed amendment to the region’s long-term transportation improvement program.

Simultaneously, the Atlanta Regional Commission has started the competition among local governments for the region’s estimated $29 million a year in federal funding for projects that reduce traffic congestion and improve air quality. The filing deadline is Sept. 27 for this new round of federal funding. 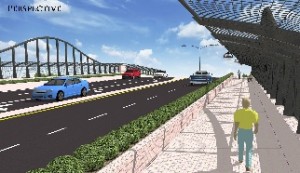 Collectively, the projects represent the type of recalibration that is surfacing a year after metro Atlanta voters rejected the 2012 transportation sales tax and its $8.5 billion in planned mobility improvements. In a sense, this approach shares similarities with “framework for transportation progress” outlined by the Georgia chapter of the Sierra Club.

“We tend to view the failure of the [sales tax referendum] not as a blanket rejection of new transportation investment in general, but rather as a rejection of institutional status quo … and as an opportunity to chart a new course forward based on improved accountability and responsiveness to our actual 21st-century transportation needs,” states an article published last week in the organization’s quarterly newsletter. 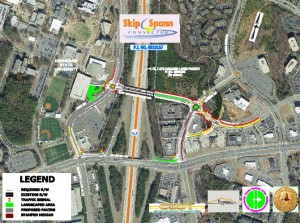 The planned Skip Spann Connector bridge, near Kennesaw State University, has been designed to cross the managed toll lanes that are to be built along I-75 and I-575. Credit: Cobb County

The federal program that is specifically intended to improve air quality is expected to provide a total of $124.1 million through 2019, according to the Atlanta Regional Commission, which administers the Congestion and Mitigation Air Quality Program.

ARC has determined that projects that could be funding in the program’s later years will not be put into the region’s long-term Transportation Improvement Program in order to allow for flexibility in the future, according to grant documents.

Local governments have until Sept. 27 to apply for grants. Awards are to be announced in December.

The new bridge in Cobb, slated for construction starting this autumn, and the stormwater project along Ponce de Leon are among six changes contained in a proposed amendment to the region’s FY 2012-17 Transportation Improvement Program. The changes were approved Thursday by the ARC’s Transportation and Air Quality Committee. Before becoming final, the changes must be approved by the boards of ARC and GRTA.

The five other projects that are requested by the state Department of Transportation include: