Soon to be in metro Atlanta, Google fiber has benefited other cities

Based on the experience of other cities where Google has installed high-speed Internet cable, Atlanta’s entrepreneurial community could gain a great deal of momentum.

Google posted this map of the cities that are to receive fiber optic cable. Credit: fiber.google.com

Kansas City was one of the first cities where Google installed cable that transports data at up to 10 times the speed of traditional copper lines, in 2012.

Google announced Wednesday that it intends to install fiber optics in the city of Atlanta, and eight surrounding cities, as part of its expansion in the South – adding the regions of Charlotte and Raleigh-Durham. The other cities are Avondale Estates, Brookhaven, College Park, Decatur, East Point, Hapeville, Sandy Springs, and Smyrna.

Just this month, a report in the Kansas City Business Journal provided this description of the economic development results attributed to Google’s fiber optic cable: 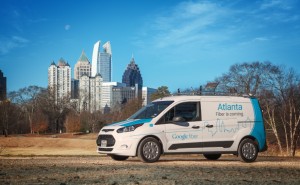 Google released this image of the types of vehicles that will install fiber optic cable in Atlanta and eight surrounding cities. Credit: google

In a report published in December, the KCBJ provided this comment from Mike Burke, a co-chairman of the Mayor’s Bi-State Innovation Team:

Kansas City already had a good bit of energy.

The region is half-way through a seven-year development program developed in 2011 by members of the Greater Kansas City Chamber of Commerce.

The program was named Five Big Ideas. Some of the ideas are similar to those Atlanta’s civic leaders cultivate:

UMKC is a strong supporter of the Five Big Ideas program, according to Chancellor Leo Morton.

In addition to partnering on the urban renewal of a 30-block blighted community, the university is focusing resources on medical and transformational research, entrepreneurship, and relocating the conservatory, Morton wrote on the university’s website.