A tribute to John Lewis to be unveiled Monday in Freedom Park is being created by a renowned Earthwork artist who fashioned this image of the civil rights leader soon after he completed works of Joe Biden and Kamala Harris. 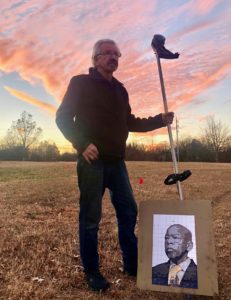 Stan Herd is creating the image of Lewis near the intersection of Moreland and North avenues. The piece follows his portraits of the president- and vice-president-elect, and his attention-grabbing creations in three battleground states – Michigan, Pennsylvania and Wisconsin.

Herd calls his Lewis piece a “temporary earthwork,” meaning that he used natural materials to make an ephemeral geoglyph, a type of art that may be best recognized as the Nazca Lines in Peru.

The artist Christo is another artist who created temporary displays of contemporary art, including the surrounding of islands in Miami’s Biscayne Bay with a floating fabric, in 1983, and the draping of Germany’s Reichstag with 1 million square feet of shiny fabric and 9.7 miles of polypropylene rope.

Herd has been called the “father of crop art” for his Earthwork representations created in China, Cuba, Australia and Brazil, as well as at least 13 U.S. states. The work in China took a year to create, according to a report on his webpage.

Regarding the image of Lewis, Herd said it fits into his life’s work to highlight individuals who have improved mankind: 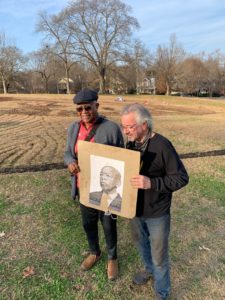 Herd was at work on Sunday afternoon. The partly cloudy weather was an improvement on the overcast skies earlier in the week. Lighting is important in shaping grass and grounds, and adding natural materials, to provide the colors and textures that will appear from the sky as an image of John Lewis.

Painstaking preparation appears to be an essential component of a successful work. In this case, Herd started with a portrait of Lewis, showing head and shoulders. This image was transcribed to the ground and the work entails the use of grass clipping devices to carve furrows, and the addition of natural materials to add texture and color.

Preparations included gaining support from Atlanta city officials to install the art. A central concern was for the image to be apolitical, Herd said. Discussions ensued for about two weeks and the city granted approval for the image of Lewis to be installed near the eastern tip of a roadway renamed in Lewis’ honor, the John Lewis Freedom Parkway.

Herd compared his works to a performance art piece. In a conversation on Dec. 30, when the project was just starting to take shape on the ground, Herd described the process of creating such an Earthwork: 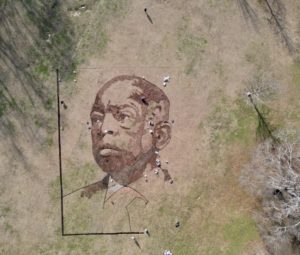 This aerial view shows the Earthwork image of John Lewis taking shape under the hands of artist Stan Herd. Courtesy of Stan Herd

Each Earthwork will last for a few shining moments. By definition, Earthworks, including the Lewis piece, fade away. Part of Herd’s arrangement with the city is to return in the Spring and make sure it has faded away:

Herd looks forward to the return visit, and reuniting with new friends met at Manuel’s Tavern: 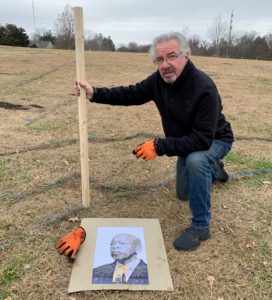 Earthwork artist Stan Herd works from a grid on a portrait of John Lewis to transfer the image to a large plot of ground, where the artwork is created with grass cutting tools and natural materials. Credit: Kelly Jordan