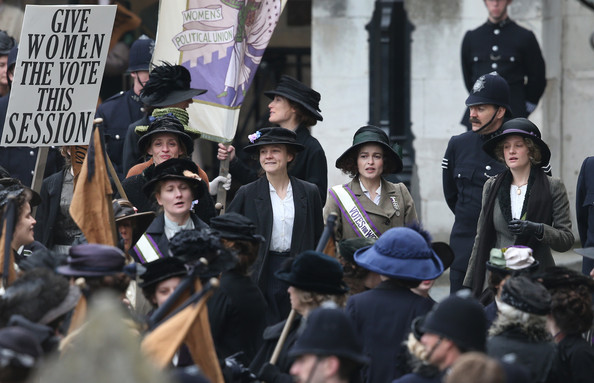 Yoko Ono was right. Women are the n-word of the world.

And they deserve far better than the mostly insufferable “Suffragette,” a drab, murky, dispiriting movie about the struggle for women’s suffrage in Great Britain, circa 1912.

The film is doubly frustrating because it has a good story to tell — one many of us don’t know. 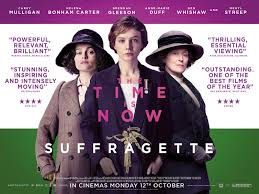 Suffragettes in Edwardian England were initially condescended to, jeered at and generally dismissed. (Remember Mrs. Banks in “Mary Poppins?”)

The government solemnly questioned if women had the “firmness of temperament” or “soundness of mind” to vote. Plus, they were, after all, already well represented – by their fathers, brothers and husbands.

That is, women were given the full-on “Don’t worry your pretty little head” treatment.

When words and marches got them nowhere, the suffragists  (as many of them preferred to be called) increasingly resorted to terrorist tactics, though, unlike today’s version, they targeted buildings, not people. In return, they were ridiculed and ignored, beaten and arrested. In many instances, their families turned on them and their children were taken away.

Carey Mulligan gives a courageous performance – especially under the circumstances – as a fictional working-class woman named Maud who’s reluctantly drawn into the struggle. Employed at a laundry since she was seven, she and her co-workers endure poisonous fumes, ungodly hours, serious burns and, almost inevitably, the unwanted sexual attentions of their boss. 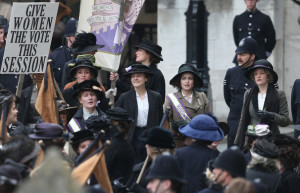 A scene from “Suffragette” movie

Even so, Maud has never thought about the vote. She’s happily married, with a young son. When he becomes ill, she takes him to a nearby pharmacy where she meets Edith (Helena Bonham Carter), a passionate supporter of Emmeline Pankhurst (Meryl Streep in a barely-there cameo), the leader of the right-to-vote movement. Pankhurst calls for deeds, not words and declares she’d “rather be a rebel than a slave.”

Convinced by Edith to attend a speech by Pankhurst, Maud runs afoul of the authorities. Arrested simply for being there, she’s soon targeted by a tough-minded, albeit essentially fair-minded, police inspector named Steed (Brendan Gleeson).

However, as the film shows, the suffragette movement pulled together all social classes. A wealthy aristocrat, bailed out of jail by her husband, insists he also post bail for the rest of the demonstrators.  He refuses – even though it is her money he is using.

Sarah Gavron’s direction has no spark, no…well…bite. She’s addicted to handheld cameras, flat dialogue and suffocating close-ups. Her cinematic palette is all browns, blacks and grays. She’s so deadly earnest, she smothers her own movie.

Still, to her credit, the film doesn’t demonize the male characters. Ben Whishaw, who plays Maud’s husband, comes in for his own abuse: “Control your wife,” the neighbors jeer when Maud returns from jail. And Gleeson manages to voice all the expected “male chauvinist” sentiments without coming off as either a mouthpiece or a caricature. “What would you do with the vote?” he asks, sincerely. “Same as you,” replies Mulligan, sincerely.

There is an important and perhaps exhilarating movie buried inside “Suffragette’s” dutiful stuffiness. As we learn in the picture’s coda, women did not get the vote in Great Britain until 1918. And even then, it was granted only to women over 30.  Women in America were granted the vote in 1920, more than 50 years after African-American males (who, for centuries were not even considered human). France let women vote in 1944. Switzerland in 1971.

And let’s not forget recent history. When Hillary Clinton was running for President in 2008, a heckler shouted, “Iron my shirt!”

Imagine the reaction if he’d yell at her opponent, about-to-be-elected Barack Obama, “Shine my shoes!”

“Suffragette” means well, but manages to do just about everything badly.  Maybe, if we’re very lucky, Ken Burns will get interested in making a mini-series about what women wanted.

Previous Article
Ceiling the deal by Kelly Jordan
Next Article
U.S. Surgeon General: Walking is good for your health