COVID-19 vaccinations have not lowered the enthusiasm for pandemic-induced teleworking among employees of Atlanta’s major business hubs. And they’re increasingly worried about returning to the stresses of commuting amid signs that many of their bosses want them back in the office.

Those were among the themes in the latest installment of remote-work surveys conducted by Georgia Commute Options, a state-sponsored alternative commuting program, and its partner organizations in Perimeter Center and Atlanta’s Atlantic Station, Buckhead and Downtown areas.

GCO began the surveys of partner employers amid the pandemic shutdowns of April and May 2020, drawing more than 2,900 responses. Various follow-up surveys and interviews have followed every two to four months and will continue through the fall. (While the number and identities of participants varied in each stage, all results are statistically valid, according to the Atlanta Regional Commission, which manages GCO.)

The latest survey was conducted in April, providing the first year-to-year numbers and the first since vaccinations became available to all adults in Georgia on March 25.

As the pandemic wanes, a hint of emerging tension between managers and workers can be seen in opposing trends for telework appetites. The majority of respondents were still teleworking in April, wanted to keep working that way for most of the week, and reported benefits from it — including better productivity — that have only grown since the pandemic’s start.

But managers reported teleworking fewer days on average, want to do it even less in the future, and have growing concerns about workers’ productivity. 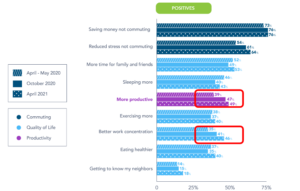 Some of the benefits of teleworking reported by respondents to Georgia Commute Options surveys about the pandemic-induced work-from-home period. Saving money, reduced stress and higher productivity are among the claims.

And the more people worked from home, the more they wanted to do it. A year ago, when respondents were freshly forced to “shelter in place,” only 17% wanted to keep remote-working all week. By October, that number was up to 35%, with another 25% wanting to telework 1-2 days a week, percentages that have held fairly steady. The average number of days per week that respondents want to keep working from home ticked up from 2.5 a year ago to 3.1 today, a number also holding steady.

It’s easy to see why in the self-reported lifestyle benefits of teleworking, most of which increased in the past year. Saving money by not commuting was reported by 76% of respondents (up from 73%) and less stress by 64% (up from 54%). Many respondents feel their work has improved, too: 49% say they’re more productive (up from 39%) and 46% say they concentrate better on work (up from 35%). Negative impacts were mostly ranked lower than the positives, with a struggle to unplug from work (33%) and distractions from kids or pets (21%) the most significant.

Managers and executives as a group have a different experience. Their average remote-work days per week were lower: 3.6 and 3.4 compared to 4.1 for non-managers. And the amount they want to keep doing it is lower, at an average under 3 days per week. Managers also reported more difficulty in unplugging from work, at 47% of respondents. 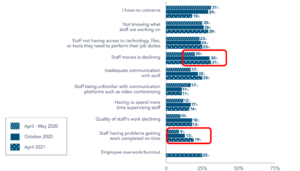 Managers have several increasing concerns about productivity among teleworking employees, according to the GCO survey.

While many workers are self-reporting higher productivity, many managers aren’t so sure. Managers’ concerns with remote working increased in most categories year-over-year, such as declining staff morale (31%, up from 20%), problems finishing work on time (19%, up from 9%), and inadequate communication (29%, up from 25%). The percentage of managers who had no concerns at all about remote work plunged from 31% to 18%. In April 2021, 42% said a new or updated policy about telework or flex-work was among their priorities

Another sign that returning to the office will bring tension is significant, and growing, concern about such commuting negatives as increased stress (a worry of 61% of respondents in April 2021) and increased spending (47%).

One data point indicates that if employees do return to the office, public transit may be a less likely alternative as many employers have slashed pass subsidy programs. The GCO report cautions that those results came from a small sample size, meaning they may not be statistically significant. However, it could be another sign of a ridership struggle for transit services, as the pandemic has already caused such topsy-turvy changes as state-supported vanpool use outpacing that of the Xpress commuter bus service.

The pandemic has not affected everyone equally, and teleworking is no exception. The survey shows some differences depending on age, race, gender and household income.

Not surprisingly, parents reported suffering more distractions from their work, but there was a significant gender gap. Women parents reported spending an average of 13.7 hours per week assisting their children, compared to 8.3 hours for men. And there was a racial difference as well: for Black women, that average was 17.7 hours compared to 10.9 hours for white women.

In another racial difference, Black or African American workers were more likely to say that working from home increased their job advancement opportunities: 32% said it had a “very” or “somewhat” positive impact, compared to 20% for others. Black respondents and all other respondents were similar in reporting negative advancement impacts at around 13% to 14%.

The lifestyle flexibility of working from home was not enjoyed equally, either. For respondents in households making under $40,000 a year, only 8% said they could work whenever was convenient for them, compared to 26% for middle-income households and 29% for households making $100,000 a year or more.