Leave it to the folks at Georgia Tech to turn the random falling of a towering tree into a learning experience and exhibit. The willow oak that stood for more than 100 years on campus has been rendered into remembrances that are on display through March 8. 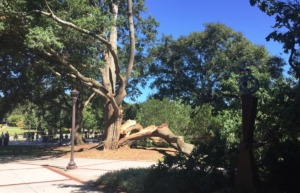 Big Al, a towering willow oak, was believed to be more than 100 years old when it fell last September near Georgia Tech’s student Center. Credit: news.gatech.edu

The beloved tree that had been named Big Al by a group of students split without warning the morning of Sept. 18, 2018. It size was befitting its age – a crown width of 87 feet on a tree that stood 81 feet high, according to a report by Tech.

The demise of the tree made headlines on campus news outlets: 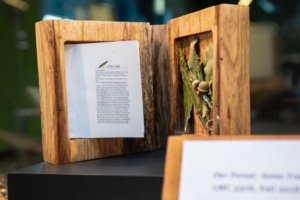 Students made xyloteques, books whose covers are made from trees, to commemorate Big Al, a 100-plus-year-old willow oak that split last September at Georgia Tech’s campus. Credit: news.gatech.edu

Associate Professor Hugh Crawford shifted his plan for the students’ big project for the semester. The subject matter for the class was unchanged – the role of trees in American culture, and the ongoing “recalibration of human’s relationship with the natural world.”

But the project shifted from building a play structure for a local school to memorializing a tree that had been part of Tech’s institutional memory since about the time the school opened in October 1888 with a class of 84 students.

“It seemed obvious to do an installation,” Crawford said in the most recent story Tech posted. “We knew there’d be a lot of interesting stories to tell.” 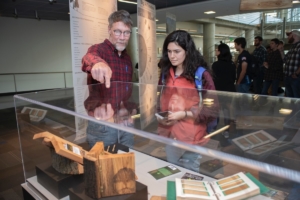 Hugh Crawford, the Georgia Tech associate professor who shifted his lesson plan to use the demise of a beloved tree to teach students about the relation between humans and trees, shows an exhibit to Jaimee Francis, an economics major. Credit: new.gatech.edu

Crawford asked the students to pick a tree and spend time with it each week. Just sit in the shade of the boughs, think, and write down the musings that came to mind. Student Alex Flack, an international affairs major, said he’d ignore his phone and consider readings from class or poetry, or even just consider the tree.

The final result of their work was a book, Our Forest, that contained student writings from their time beneath those trees.

Of note, the exhibit was created by students in an honors class. The Romantic notion of sitting beneath a tree, and creating art pieces from a fallen willow, came as a curve ball to students including Flack, who observed: “I never would have thought I’d do something like this coming to Tech.”

The synopsis of their class notes the purpose is to study:

Note to readers: The exhibit, “Fall of a Champion,” is to be on display on the third floor of Clough Commons, at the top of the central stairwell, through March 8. 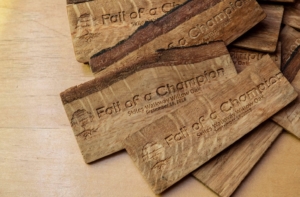 Bookmarks made from pieces of Big Al remind of the willow oak tree that fell after shading Georgia Tech’s campus for more than 100 years. Credit: news.gatech.edu 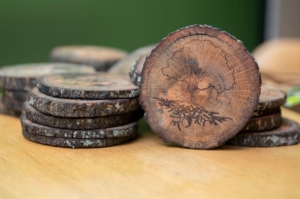 Some remnants of Big Al, a willow oak tree at Georgia Tech thought to be over 100 years old, were turned into coasters. Credit: news.gatech.edu