Time to buckle down on BeltLine challenges, says its first planner 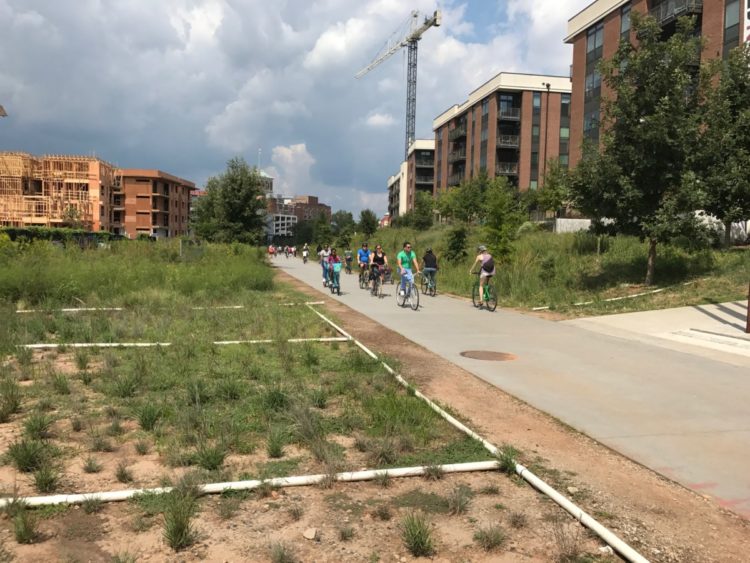 The price of a three-bedroom apartment starts at $2,999 a month in the building on the right, the 755 North Avenue complex that overlooks Old Fourth Ward Park. Credit: David Pendered

With huge population growth on the horizon, Atlanta’s at a moment where it needs to handle the challenges that are coming with the BeltLine, says its godfather, Ryan Gravel.

“It’s pretty cool that we’re doing it, aside from our real challenges, especially around affability and transit. I am super-proud of the work that we did. Whether we’re 100% successful or not … I think it’s definitely a net positive for Atlanta,” said Gravel, speaking to about 50 folks gathered in a small church Wednesday night. 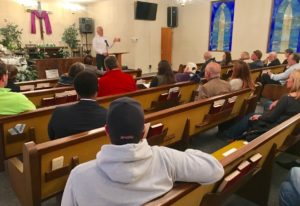 Ryan Gravel, best known for a student thesis that became the BeltLine, told a meeting of the Northwest Community Alliance on Wednesday that Atlanta has to get ready for a population boom. Credit: Kelly Jordan

But what’s necessary is to buckle down and handle hard stuff, he told the gathering, organized by the nonprofit Northwest Community Alliance, a coalition of neighborhoods and “neighborhood-friendly” developers and businesses dedicated to smart growth.

Gravel’s 1999 Georgia Tech master’s thesis outlined the BeltLine idea, and he was a large part of the grassroots movement that made it a reality. He’s now an urban design consultant with a private practice.

But he has not shied away from calling out the city and the BeltLine bosses when he sees a problem. Almost two years ago, he resigned from the board of the BeltLine Partnership, a private fundraising group, over concerns that the project wasn’t emphasizing equity and affordability enough.

And his NCA talk came just days after he posted a public warning that if city and MARTA leaders don’t fund transit on the BeltLine, it won’t be the thing that lots of original grassroots supporters expected and demanded. A streetcar on the 22-mile loop was always part of the plan from the beginning.

“The trail [now] provides great mobility as long you’re able-bodied, and you’re not going too far or it’s not raining or snowing or it’s too dark at night or if you don’t have to wear a suit, that kind of stuff,” he said. “It’s great for a certain group of people at certain times of day, but … the transit is what makes it for everybody.”

Atlanta has a window of opportunity to make some changes and new policies to get in front of city population rises that are expected, he said.

The alternative is the kind of affordability crisis that’s familiar in San Francisco or New York City.

If changes don’t happen, “we better just start thinking about where else we might want to live. That might be a little bit of hyperbole but maybe not,” he said.

Besides funding BeltLine transit, he thinks it’s a great idea to put transit on streets. Though he’s not convinced Atlantans are quite prepared for that, because it’s going increase traffic by removing car capacity from the street.

“I think on the whole, I would hate to spend a lot of money investing in transit that’s not going to actually move people around and be effective as a transit corridor. I think that the BeltLine is one of the few corridors that is actually prepared for that,” he said. 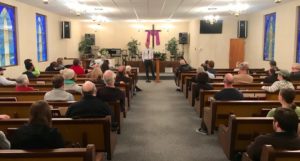 And on affordable housing, Gravel repeated several times that that’s not his specialty. But he pointed to ideas from the Atlanta City Design project, an official growth roadmap which he helped draw up.

That report suggested things like zoning that would make it easier to set up different kinds of housing, like garage apartments or cohousing; or building apartments without so many parking spaces.

Gravel took some questions from the audience. One person asked where city residents should apply pressure, how they can promote the BeltLine they want.

He gave one tactical answer: pressuring City Council on transit.

But he gave another, broader answer.

“One answer is to talk to your neighbors about it because really the most powerful voice here, I know it doesn’t seem like it sometimes, is people. If the public wants something … if your constituents demand that something happen, then you’re going to listen to it.”