Voices in Georgia streets demand change. That usually takes a while.

Marchers started at the MLK Center and hiked down Auburn Avenue last week, one of dozens of metro Atlanta protests. Credit: Kelly Jordan

That law was cited by a southeast Georgia prosecutor who argued there was insufficient probable cause to issue arrest warrants for Travis and Gregory McMichael in the killing of black jogger Ahmad Arbery.

It authorizes any Georgian who thinks they saw someone committing a felony to detain that person. Even Georgians who imagine this state in 2020 is the Wild West. 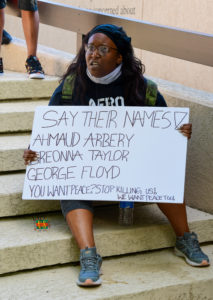 A repeated theme among protestors this week: say the name of Ahmaud Arbery; three white civilians are charged with his murder in Brunswick. And that of Breonna Taylor, killed by police in her home in Louisville, Ky. And George Floyd; four Minneapolis police officers face charges including murder in his death. Credit: Kemet Alston of Divrs Media

About two hours after the Dems’ caucus announcement, a press release arrived signed by three state House Democrats and two Republicans announcing their support for the same repeal, making it a bipartisan effort.

Street protests against police brutality are also helping build support in the state Legislature to increase penalties for crimes found beyond a reasonable doubt to be motivated by racism or other hates.

The state House OK’d a hate crimes bill in March 2019, though it has since sat in the state Senate without action. But with even a big business lobby now pushing for House Bill 426 now, its chances seem stronger by the day.

On the local level, Atlanta Mayor Keisha Lance Bottoms has put together a committee to review police use-of-force policy.  And more policy changes or ideas may come as she and Atlanta City Council leaders identify and meet with protest leaders.

Some professors and veteran political observers say this time the protests feel different, or this time real change is coming.

But if that’s true, it’s liable to feel slow.

Fulton DA Paul Howard was criticized in a campaign forum last week — facing longstanding anger over the lack of indictments (or other resolution) for police officers in three civilian deaths.

As of Thursday, Bottoms and her office were working on identifying representatives of protestors in Atlanta’s streets and setting up meetings to hear demands. Bottoms said anecdotally said from her own observations, she’s heard several demands, such as setting up a citizen police review board.

As she pointed out in a call with Atlanta City Council Thursday, the city does have a citizen police review board that hears and investigates public complaints about the police. It’s a legacy of the 2006 police killing of 92-year-old Kathryn Johnston.

And police are free to ignore the board’s recommendations.

Atlanta is serious about closing its jail and turning it into a center for equity.

But in the meantime, police used it for processing more than 200 people arrested mainly for curfew violations or being in the street during protests.

Atlanta is already doing some of the best practices meant to build relationships with communities. Like opening At-Promise Centers for young folks. And encouraging cops to live where they police.

But Atlanta is only one little piece of the state, about 20 miles across. 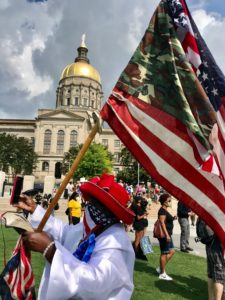 A protestor at the Georgia Capitol this weekend. Credit: Kelly Jordan

All of Georgia’s 159 counties have a sheriff’s office. Many cities have their own police too. And then there are university campus police, MARTA police and a bunch of state agencies with law enforcement powers too. All of them have different funding sources, bosses and practices.

The state Capitol is patrolled by state law enforcement. One of their jobs? Standing shoulder-to-shoulder to protect a statue of a Confederate general.

And inside that Republican-run Capitol, Democrats have filed unsuccessful hate crimes legislation almost every term since 2005. (The version that was successful in the House this year is authored by a Republican from blue-turning Gwinnett County.)

The two state House Republicans who made a point of saying they want to repeal citizen’s arrest are fairly low-ranking. Neither chairs any of the key committees that would probably hear such a bill. Its prospects aren’t good for the 11 working days left in this legislative year.

Even a Republican governor, Nathan Deal, required baby steps over eight years from 2011 in a Capitol he dominated to pass his marquee criminal justice legislation that emphasizes rehabilitation over prison.

So what to do?

(If you missed June 9, that’s OK. Register and be ready for the November general election.)

And whatever your passion is, there’s liable to be a group working for it. Like Women on the Rise for decarceration. Folks who know the exhausting intricacies of jurisdiction lines, public funding, who to lobby, where to find allies, when it’s time for a lawsuit.

Getting involved is the only way to make any revolution move any faster.

Previous Article
Georgia Now & Forever: Georgia’s Historic Land Cover and What the Future Holds
Next Article
Innovation and partnership to get-out-the-count during COVID-19