This week 86 years ago, one of north Georgia’s greatest beauties — known today as the Chattahoochee National Forest — was established by President Franklin Roosevelt.

Before this, the forest and its wildlife suffered greatly from hydraulic mining for gold, overcutting and poor management. The U.S. Forest Service eventually purchased 31,000 acres in 1911, planting trees, addressing erosion and reintroducing some animal populations that had nearly disappeared.

Dickens announced the news on social media, cheekily captioning the photo, “I guess this is why Midnight Basketball has an age limit. #ThisIs48 #Stayinmylane.”

He’ll be stuck with a boot for a few weeks and had to hang by the sidelines for the Peachtree Road Race, but is otherwise hitting the city with the same gusto as before.

In March, Dickens launched Midnight Basketball, a summer youth program that gives residents 18-24 something fun to do at night while avoiding trouble.

I guess this is why Midnight Basketball has an age limit. Fractured my foot shooting hoops during warm-ups and am booted up for a few weeks! #ThisIs48 #stayinmylane @ Atlanta, Georgia https://t.co/nGOtbQE2Q7

A long-promised police mini-precinct in Buckhead opened its doors on June 29 to help quell crime and the controversial cityhood movement fueled by it.

The ribbon-cutting of the West Village branch of the Atlanta Police Department’s (APD) Zone 2 precinct featured Mayor Andre Dickens and Gov. Brian Kemp in a demonstration of political unity that was very different from the governor’s frosty relationship with former Mayor Keisha Lance Bottoms.

Staffed by 12 officers, the mini-precinct is located in One Buckhead Plaza at West Paces Ferry and Peachtree roads.

The opening drew praise from cityhood opponents and criticism from cityhood supporters – some of whom attended the event and protested that it was more of a publicity stunt.

“This new precinct is an example of the effectiveness of public-private partnerships, with business and civic leaders working arm-in-arm with elected officials to make our community safer and city government more effective,” said Linda Klein and Edward Lindsey, co-chairs of the anti-cityhood Committee for a United Atlanta, in a publicly issued letter to their supporters.

Bill White, head of the pro-cityhood Buckhead City Committee (BCC), claimed that APD is “lying” about the staffing and a reported 12 percent drop in Buckhead’s crime rate this year. Citing the BCC’s own sources and original analysis, White said only seven officers are staffing the mini-precinct and that crime is up 20 percent, but hidden by APD supervisors reclassifying incidents as lesser offenses, which he says “happens every single day at APD.”

APD said none of that is true and that its Central Records Unit reviews all crime reports to ensure they are properly classified and comply with FBI standards. “We stand by our crime stats and we stand by our statements regarding staffing at the new Zone 2 precinct,” said APD spokesperson Sgt. John Chafee. 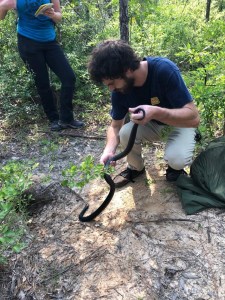 Before starting this effort with regional and federal partners, the eastern indigo snake hadn’t been seen in Alabama for about 50 years. So far, over 200 snakes have been released into the National Forest, and 100 of them were raised at Atlanta’s Zoo.

Zoo Atlanta’s primary role is raising the hatchlings until they become big enough to fend off most predators that feed on juvenile snakes. The snakes have limited interaction with caretakers to best prepare them for the wild.

“The eastern indigo snake reintroduction program is an outstanding example not only of the power of partnership but of a conservation project that is being proven to work, with the most rewarding long-term results being a thriving population that includes descendants of reintroduced snakes,” Vice President of Collections and Conservation Jennifer Mickelberg said in a press release. “There is still work to be done, but it is very rewarding to know that we are helping an important native species regain a sustainable solid footing in its original range.”

The eastern indigo — the largest nonvenomous snake in North America — is identified as a threatened species, and is native to southern Georgia, Florida, Alabama, South Carolina and Mississippi.

Behind the Boston Scientific deal, a tax break and still-secret incentives

The state’s June 28 announcement of a large medical device manufacturer’s new facility in Johns Creek came without any mention of tax breaks and other incentives the company will receive, most of which remain secret.

One known incentive for the Boston Scientific facility is a property tax break estimated at $2,082,307. That break was approved by the Development Authority of Fulton County (DAFC) hours after the Governor’s Office issued a press release announcing the facility and quoting the DAFC’s board chair with no mention of the pending vote.

Other incentives are coming, but the Georgia Department of Economic Development won’t yet say what they are. “The incentive agreements for this project are currently being negotiated and have not yet been signed,” said department spokesperson Jessica Atwell. “Once finalized and signed, we’d be happy to provide information pertaining to incentives for this project.”

The project also will automatically qualify for five-year state tax credits for jobs it creates that could add up to millions of dollars.

The Massachusetts-based company plans to consolidate existing Fulton County divisions and create new space and jobs at a former State Farm insurance complex at Johns Creek Parkway and McGinnis Ferry Road. The company will redevelop about 10 acres of the site. Another 45 acres are pegged for a mixed-use project that developer Mark Toro announced a week before the Boston Scientific plan was unveiled.

The DAFC, which voted on the project under its secret state code name “Project Lemon Lime,” provided the most public information about the deal. Some of its key numbers differ from those announced by state officials.

The state described the project as a $62.5 million investment that will create “roughly” 340 new jobs over seven years. The DAFC authorized up to $75,000,000 in development bonds and says the project will retain 250 to 325 jobs and create 225 new ones. The DAFC also claimed the project will have an “overall economic impact” between $1.33 billion and $1.52 billion.

The main reason for the incentives cited by officials and the company was competition from other states. Samir Abdullahi, director of the County economic development agency Select Fulton, told the DAFC board that it’s a big deal to say “we stole bio life science [business] out of Boston” and that the Governor’s Office issued the press release prior to the tax-break vote “with some confidence that we would get some support from this board.” The DAFC board has already given tentative approval to execute a deal at an April meeting.

A DAFC fact sheet on the project also claimed hardships for the company centered on how the Georgia plan, unlike opportunities in other states, involves erecting a new building. The fact sheet claims that because Georgia has “less history with Life Sciences,” there is a “greater atypical development cost.”

The fact sheet also claims that the company “has found real estate in Georgia to be vastly more expensive than its locations outside of the State.” Direct comparisons of properties are impossible because of the secret process. However, property tax records show that the company’s Massachusetts headquarters is valued for tax purposes at around $1.9 million an acre, while the Johns Creek site is valued at around $1.3 million an acre, and even less if factoring in the rest of the former State Farm complex.

In July and August, Atlanta’s transit authority is hosting a series of job fairs for bus operators and bus technicians.

The job fairs will be held on July 7 and 21, and August 4 and 18 at MARTA’s headquarters — 2424 Piedmont Road NE, across from the Lindbergh Center Station.

New employees will receive a $3,000 sign-on bonus and training to obtain their Commercial Driver’s License. Pay starts at $17.74/hour for operators and $23.91/hour for technicians. 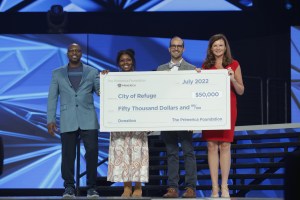 Atlanta’s City of Refuge — a faith-based organization aiding individuals and families in crisis — recently received a $50,000 grant from The Primerica Foundation during its 2022 International Convention.

The grant will be used to fund the nonprofit’s services for low-to-moderate income families and individuals, including health and wellness, job training and youth development programs.

“Primerica is pleased to support City of Refuge, and the critical work they do to help families in crisis,” said Kathryn Kieser, Chief Reputation Officer and Chair of The Primerica Foundation. “Our commitment to the communities we serve extends to every area of our business from financial education to assisting vulnerable populations who need us most. Through philanthropic partners like City of Refuge, we are working to build stronger communities.”

Starting Oct. 1, the company will raise its minimum wage to $22 an hour. Truist’s minimum wage usually sits around $15 to $18 per hour, and about 14,000 Truist employees can expect a pay boost when fall rolls around.

“Truist strives to competitively compensate our teammates for the tremendous work they do for our clients and stakeholders, and we take a Total Rewards approach, including offering highly competitive wages, a robust wellness program, comprehensive benefits and an industry-leading 401(k) and pension program,” Kimberly Moore-Wright, chief teammate officer and head of enterprise diversity, wrote in a press release. “This critical investment in our teammates further rewards the positive impact they make to provide a distinctive client experience and deliver on our purpose to inspire and build better lives and communities.”

Truist is a top-10 U.S. commercial bank — formed in 2019 from the BB&T and SunTrust Banks merger — that offers financial services for retail, small business and commercial banking.