A report by Invest Atlanta on the projected economic impact of Worldpay’s move to Atlantic Station illustrates the reasons city leaders want more tech firms in the city.

The jobs pay well and will add significantly to the city’s tax base. The products these employees create are of a high value, and the work process doesn’t create the environmental challenges of some other industries.

Worldpay is a global financial technology firm. It processes 26 million transactions a day in more than 120 currencies. It is adding 450 customers a day, according to its webpage.

The average wage is projected to be $65,064 for new indirect and induced employment that will be created to support the work of Worldpay.

In terms of state and local taxes, Worldpay is expected to pay a total of $37.7 million. 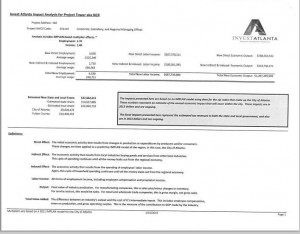 These figures are derived from a software system named IMPLAN. The system was developed and is now maintained by the Minnesota IMPLAN Group. It now is commonly used to determine the potential economic impact of new businesses or attractions, such as a sports facility.

The numbers illustrate why Atlanta Mayor Kasim Reed and other government leaders were so proud when Worldpay chose Atlanta for its new headquarters.

Worldpay could have gone elsewhere.

Worldpay’s relocation consultants had examined a number of other cities. Factors included operating cost, skilled workers, and business environment, according to a statement the city released when the site selection was announced.

Although metro Atlanta is often described as lacking in people equipped to work in high tech fields, the region evidently has an adequate supply of fintech workers.

As Reed noted in the Dec. 1 statement: “Today, our City is home to more than 40,000 payments processing jobs, strengthening our reputation as the technology capital of the Southeast. I am delighted that an industry leader like Worldpay has chosen to relocate its U.S. headquarters, and more than a thousand well-paid jobs, to the City of Atlanta.”

Two Atlanta lawyers who focus their practice on fintech say that Atlanta is well regarded for its pool of fintech workers.

“If companies want developers who have experience with payment processing, Atlanta has a lot going it,” said Roth Kehoe, an Atlanta partner with Hunton & Williams.