Workers make adjustments to realize the goal of the project demonstration. (Photo by Georgia Power.)

A multi-organizational effort proved successful in completing what Georgia Power calls the world’s largest hydrogen fuel blending demonstration. This will help pave the way for future hydrogen implementation in the Southeast.

“The demonstration project was the first to validate 20 percent hydrogen fuel blending on an advanced class gas turbine in North America, and the largest test of this kind to date,” Georgia Power said in a statement.

The 20 percent blend provides, “approximately 7 percent reduction in carbon emissions compared to natural gas,” according to the statement. 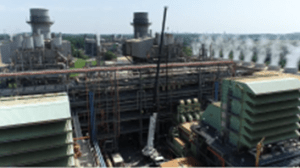 Georgia Power, the largest electric subsidiary of one of the nation’s largest utility companies, Southern Company, has committed to reducing its carbon emissions according to the statement. The company claims it has reduced carbon emissions upwards of 60 percent since 2007.

The demonstration project is part of  ongoing research and development working towards creating a cleaner energy grid in the future.

The significance for Georgia

Dr. Timothy Lieuwen, Director of the Strategic Energy Institute at Georgia Tech said he is excited about the demonstration — particularly because it is the world’s largest. He feels it signals a moving away from fossil fuels. In particular, he feels Georgia is stepping up to be not only a regional leader, but “a national leader.”

“I’m so excited. What happened there is kind of historic, so it’s really cool to know we aren’t late [to the game] but actually leaders,” Lieuwen said. “The work that we’ve done at Georgia Tech in our lab to develop the technologies 15 years ago, working with these companies that are commercializing it — it’s exciting to see the fingerprints of what I’ve personally done, and the larger group I’m working with, our fingerprints in these demos.”

The term “clean energy” oftentimes invokes thoughts of wind, solar, photovoltaic and other traditional alternative energy sources. Lieuwen argues hydrogen is not competing with these but rather working in conjunction with them. He argues that in the short term, Georgia will need to emphasize wind and solar as alternatives.

“Between now and 2030, we need to aggressively deploy wind and solar on the generation side, while also aggressively expanding the use of electric power, particularly in applications like automobiles,” Lieuwen said. 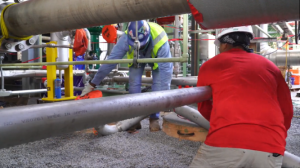 He continued by saying that in the long term, efforts like hydrogen will prove useful in taking the next step towards net-zero, which is defined as, “cutting greenhouse gas emissions to as close to zero as possible, with any remaining emissions re-absorbed from the atmosphere, by oceans and forests for instance,” according to the United Nations.

“Beyond 2030, we will need to broaden our toolbox of technologies to deploy to get to net-zero, such as utilization of hydrogen. That implies that we need to start derisking and doing pilots and demonstrations now. This is why this demonstration is such an important step,” said Lieuwen.

Lieuwen acknowledged carbon capture, hydropower and nuclear are all valuable to have in the future for a diversified power portfolio in Georgia — one that can store energy for when it’s needed most.

“Sometimes you might not have wind for a week, sometimes you may have less solar than others,” Lieuwen said. “The thing about the U.S. electric grid — It’s not acceptable for it to work on average; it needs to work all the time.”

He was also quick to note misconceptions about hydrogen.

“Just like electricity that comes out of your wall — that doesn’t just come from nowhere. It comes from a power plant, and the form in which it is delivered to you is electricity. That’s what hydrogen is —it’s not a source of energy. It’s simply a carrier of energy,” Lieuwen said. “So really, the question comes down to one, what’s the best way to move it around? And two, what’s the best way to store it?”

Lieuwen argues hydrogen can be crucial as both a carrier and a means of storing energy.

“Our pipeline — think of it as an enormous battery. You can pump hydrogen into underground caverns, and get storage for months and even years. But then you got to turn it back into something useful. And so, one of the most efficient ways to turn it back into something useful is with a large-scale gas turbine. And then you can basically make electric power so in that sense hydrogen is a battery,” Lieuwen said.

Hydrogen doesn’t come without its hesitation, like other alternatives to fossil fuels. One of the more notable tragedies involving hydrogen that comes to mind is the Hindenburg disaster, which killed 36 passengers on a blimp in May of 1937.

Lieuwen acknowledged that hydrogen, due to its high flammability, must be treated carefully to avoid unintended outcomes.

“There are gas turbines around the world running on one hundred percent hydrogen today. However, those are older technologies. And when we utilize hydrogen, it doesn’t mean we can’t make pollution,” Lieuwen said. “Whenever you heat up air beyond a certain temperature, the oxygens and nitrogens start to react with each other and form what we call NOx [Nitrogen Oxides], which is a pollutant. So anything you do to heat up air, including if you burn hydrogen and you don’t do it correctly, means you can make NOx.”

Still, implementing these technologies is crucial to using hydrogen on larger scales.

“The applications that use hydrogen today in large percentages, aren’t low-NOx technologies. They’re not actually even used in the U.S.,” said Lieuwen, citing stricter regulations domestically. “The trick comes down to utilizing high fractions of hydrogen in these really advanced, high-efficiency, low-NOx turbines. If you took a conventional gas turbine today, it couldn’t take more than maybe three to five percent hydrogen without destroying itself.”

For this reason, Lieuwen emphasized the 20 percent fuel blend demonstration is groundbreaking and hopefully a sign to other plants to take larger risks.

While hydrogen technologies are still being realized, some are all-in on hydrogen for the future. In May 2022, Georgia Senator Jon Ossoff visited Georgia Tech to talk about Georgia’s potential as a hydrogen hub in the Southeast.

He emphasized the opportunity of hydrogen for Georgia. More recently, Ossoff doubled down on his position at the Rotary Club of Atlanta luncheon talk on June 27 among other topics related to sustainability.

“The Department of Energy, as part of the bipartisan infrastructure law, will be awarding about $8 billion of grants to establish regional hydrogen hubs across the United States. Hydrogen is a growing — and one of the most important — energy sources as economies transition away from carbon-emitting forms of energy production,” Ossoff said. “Georgia should compete for one of these hydrogen hubs. We’ve got world-class logistics infrastructure, world-class resource institutions and we’ve got one of the most important power utilities in the country”.

Ossoff noted his office organized a roundtable and later sent a statement of intent to the Department of Energy, which was signed by Atlanta mayor Andre Dickens, Georgia Power, Hyundai, UPS, the Metro Atlanta Chamber, Delta Air Lines, Mitsubishi and Hartsfield Jackson International Airport, among others.

“That kind of thing makes a difference when you bring in a coalition like this,” Ossoff said. “It sends a powerful message about our intent to bring that investment to the state. And hydrogen is going to be a major growth sector for the whole world. We want that investment in Georgia,” Ossoff said.

The future (and present) of hydrogen fuel blending

The United States Department of Energy has noted the potential of hydrogen fuel blending. The DOE’s Hydrogen and Fuel Cell Technologies Office launched the HyBlend initiative with hopes of analyzing and developing technologies and policies to implement hydrogen blending more going forward. 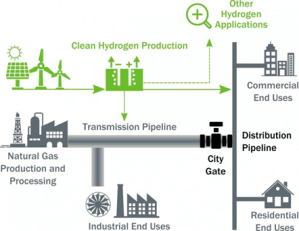 Supply chain and components of blending in natural gas networks. (Graphic by U.S. Department of Energy.)

For hydrogen supporters like Lieuwen, it’s the eventual step beyond wind and solar towards net-zero emissions.

“If the goal is net-zero by 2050, the things we need to do in the first 10 years are not the same things we need to do in the next 10 years. Today it’s electrification, wind and PV,” said Lieuwen, saying beyond 2030 when hydrogen plays a larger role in the energy portfolio. “That’s where hydrogen really becomes important, both as an energy carrier and as a way of storing energy.”

Share
Tweet
Share
Pin
Pocket
WhatsApp
Buffer4
Email
Reddit3
7 Shares
Previous Article
It’s July 4, 1966 — when a cursor was a potty mouth and Spaghetti Junction was a hip, now-and-wow Italian eatery in Decatur
Next Article
A credit to his Profession