The ninth annual HOPE Global Forum in Atlanta did not disappoint.

Once again, top business, civic and government leaders convened in Atlanta to share best practices of how to reduce poverty in lower-income communities and how to stimulate new economic wealth among those who need it most.

It is no accident that the Forum is held in Atlanta.

John Hope Bryant, founder and CEO of Operation HOPE, officially moved the nonprofit’s headquarters from Los Angeles to Atlanta in 2016. 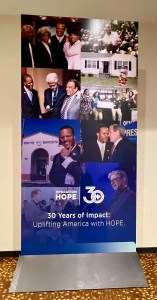 Operation HOPE celebrating its 30th anniversary. (Poster at the Forum.)

But in reality, Bryant’s relationship with Atlanta dates back to 2009, when Bryant met former Atlanta Mayor Andrew Young in a meeting with then-Los Angeles Mayor Antonio Villaraigosa. After the meeting, Young told him he needed to move to Atlanta, the cradle of the Civil Rights movement.

A friendship and a partnership were formed, which led to Bryant moving more and more of Operation HOPE’s brain trust to Atlanta.

Operation HOPE is celebrating its 30th anniversary, and it’s hard to imagine the nonprofit being based anywhere else but Atlanta.

There were so many highlights from the 2022 Forum, which was held from Sunday, Dec. 11 to Tuesday, Dec. 13 at the Hyatt Regency Atlanta. It started on Sunday night with a conversation between U.S. Sen. Raphael Warnock, who had just been re-elected. Warnock recalled getting to know Bryant 12 years ago when they started working on creating a HOPE Inside financial literacy center at Ebenezer Baptist Church, where Warnock was the senior pastor.

“It’s very important for our financial institutions to work for everybody,” Warnock told the attendees, adding that he is focused on protecting consumers from scams and exorbitant fees from finance companies. 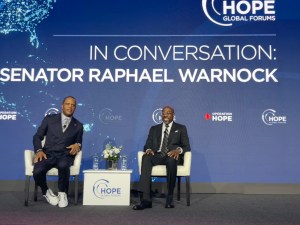 Bryant, who has been a friend to both Democratic and Republican administrations, admitted he voted for Warnock. “You are the right man at the right time,” he told the senator. “There was no other choice.”

Throughout the conference, a prevailing theme was how Atlanta is well-positioned to be the launchpad for improving the economic wellbeing of those most in need. As Bryant is fond of saying, it’s civil rights and silver rights.

Young spoke of how in the 1940s and 1950s, there were more Black PhDs in Atlanta than anywhere in the world. Martin Luther King Jr. helped make Atlanta the home base of the Civil Rights movement – highlighting the need for economic integration in addition to protesting social segregation.

“Martin said you need to get to know some white folks,” said Young, who worked alongside King. “We need to tell them what we are doing and get them to work with us for social change.” 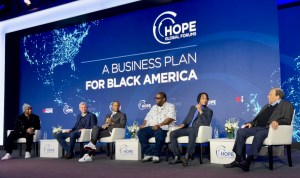 In Atlanta, a close relationship developed between the business community and the Civil Rights movement.

Benjamin Chavis Jr., a civil rights leader, said civil rights and silver rights have been “co-joined” since the beginning. And that continues with Atlanta-based Delta Air Lines and its leadership.

Ed Bastian, CEO of Delta, spoke about how the airline has partnered with Operation HOPE to improve the financial wellbeing of its 90,000 employees. It started with helping them improve their credit scores. But that wasn’t enough.

“Around 64 percent of the people in this country cannot put their hands on $400 to pay for a crisis. People are living paycheck to paycheck,” said Bastian, who found out a large portion of his employees were in the same boat. Delta has now set aside $1,000 per employee to help them through an emergency. 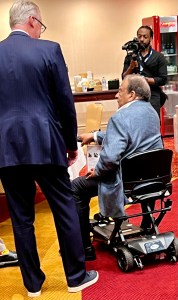 “The financial safety net comes with responsibility,” said Bastian of the program that will roll out in January. “We don’t just give them $1,000. They have to take financial coaching.”

To that, Chavis pointed to Bastian: “We need all the CEOs to be like this guy – not just a verbal commitment but a financial commitment. It’s about social justice, environmental justice and financial justice.”

Throughout the Forum, Bryant shined the spotlight on companies that were living up to that promise.

Among the speakers was Reba Dominski, an executive with U.S. Bank, which has pledged to invest $100 billion in community reinvestment over the next five years. “It’s the largest commitment by a bank in history,” Bryant observed.

The Forum almost always has folks on the program who are outside the box. This year, it was Mick Mulvaney, former chief of staff for President Donald Trump.

“It took a lot of courage for Mick Mulvaney to fly into the moral capital of America,” Bryant said of Atlanta.

In a conversation with Fortune CEO Alan Murray, Mulvaney talked bluntly about his resignation on Jan. 6, 2021. 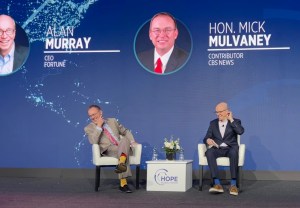 “I quit a job because my boss didn’t live up to my expectations as a leader,” Mulvaney said. “The president needed to be a leader.”

Mulvaney then told the audience that the U.S. primary system “is absolutely broken,” pointing to the election of U.S. Rep. Marjorie Taylor Greene as proof. “There’s a need for primary reform.”

One of the more inspiring conversations during the three days was a conversation between Bryant and Bishop T.D. Jakes, who is based in Texas but has real estate investments in Atlanta, specifically at the now-closed Fort McPherson.

“You have to be able to form unlikely alliances,” Jakes said, referring to the relationship between Blacks and whites as well as Jews and Christians during the Civil Rights Movement. 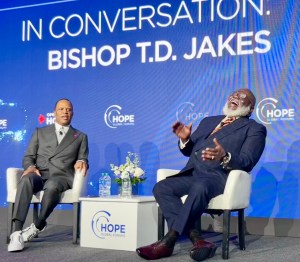 Now, at 65, Jakes is paying attention.

“I was raised by a dying father. He got sick when I was 10, and he died when I was 16. He taught me that every breath is precious,” said Jakes, who urged everyone to not waste a moment. “We are the people we’ve been waiting on.”

Then, he spoke of the flawed displacement theory. “I don’t want to replace anybody,” Jakes said. “I don’t want your seat at the table. I just want a seat next to you. If you don’t give us a seat, we will build a new table.”

Jakes didn’t stop there. “It’s not just democracy that’s at stake. Human survival is a stake. The same air that the Chinese breathe, we breathe. We have one planet,” Jakes said. “We are about to be extinct if we don’t come together as a species and bridge a divide. We are one race – the human race…. It’s going to take all of us to preserve [our environment.] We have got to become more focused on our survival as a species.” 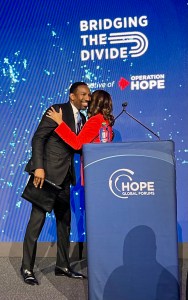 Atlanta Mayor Andre Dickens hugs Karyn Greer of WSB-TV, one of the emcees at the Forum. (Photo by Maria Saporta.)

Dan Schulman, president and CEO of PayPal, also shared how he has tried to reduce the financial stress among his employees. “We gave everybody in the company equity, and we wrapped it all in a financial literacy program,” Schulman said. “Attrition dropped by 60 percent.  The idea that purpose and profits are at odds with each other is ridiculous.”

Atlanta Mayor Andre Dickens took to the stage, where he talked about expanding a program started by his predecessor – child savings accounts. He understood the need for improving credit scores by reading Bryant’s book eight years ago.

Then, Dickens and Bryant talked about how Atlanta can be an example for the rest of the nation.

“I wanted to root this work in Atlanta,” Bryant said. “I want Atlanta to be a model city.”

Dickens agreed saying the sentiment harks back to the teachings of Martin Luther King Jr. “He wanted the inclusion of everyone having financial freedom,” the mayor said.

After the talk, the mayor elaborated on having Operation HOPE based in the city. 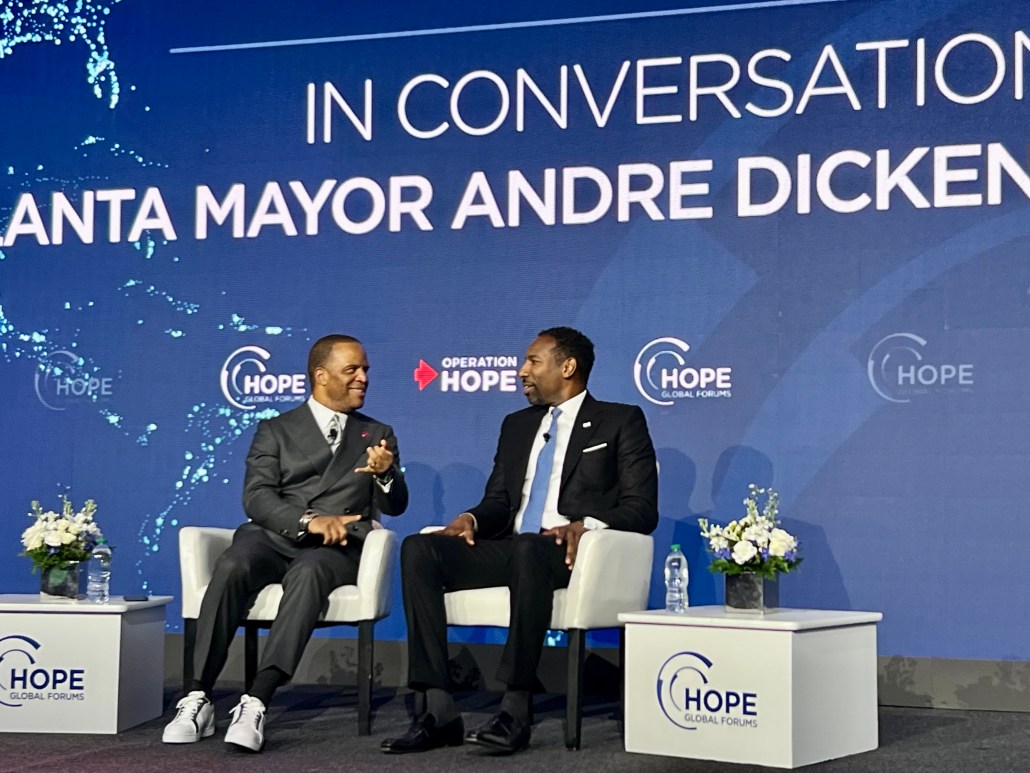 John Hope Bryant and Mayor Andre Dickens talk about how Atlanta can be a model city for financial inclusion. (Photo by Maria Saporta.)