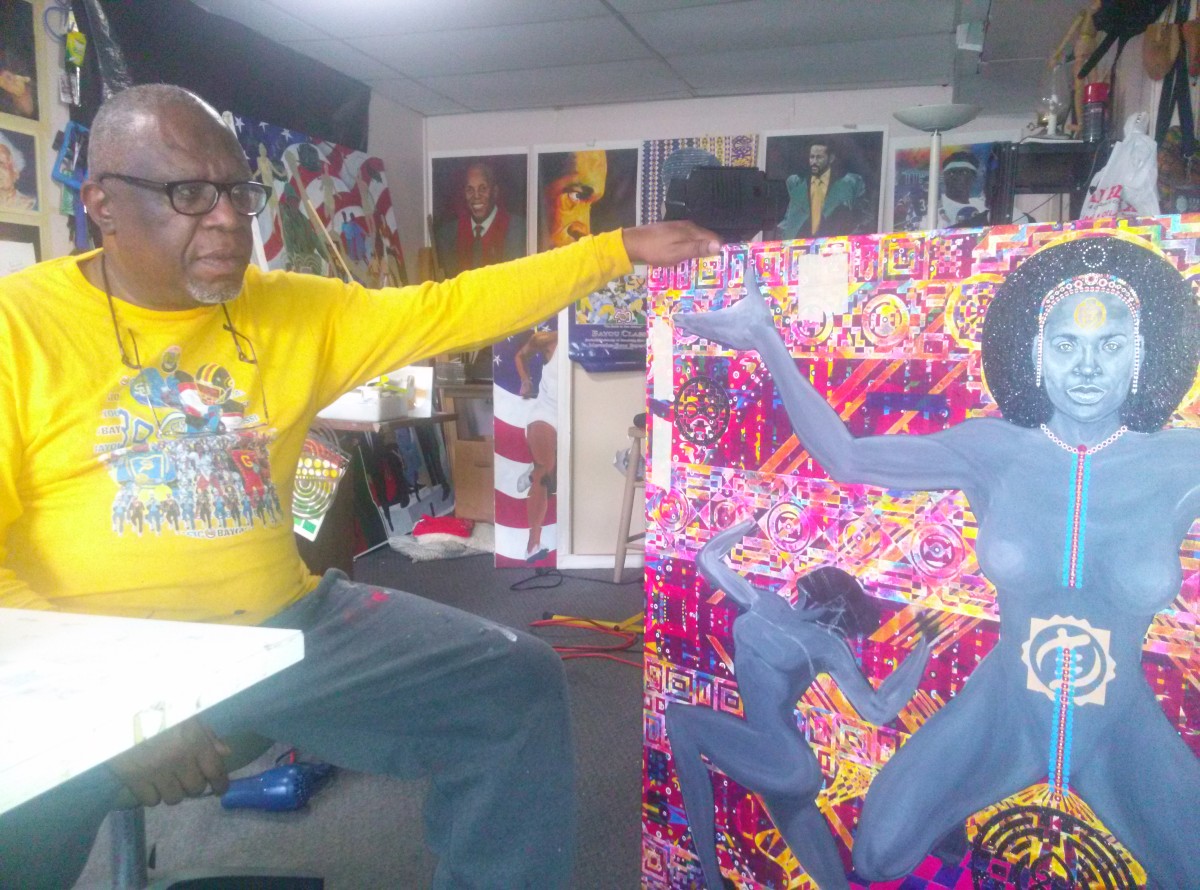 On September 24th President Barack Obama will cut the ribbon to open the Smithsonian Institution National Museum of African American History and Culture. Joining him that historic day will be Atlanta artist Steve R. Allen because four of his paintings have been acquired as part of the museum’s Founding and Permanent Collection. 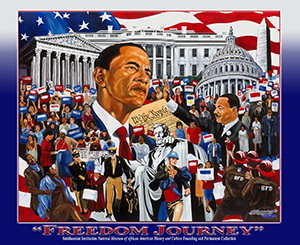 This rare honor recognizes Allen’s work for its creative and scholastic merit as well as its historical significance. It is a coveted recognition few artists have ever received in their lifetime or posthumously.

“It’s a validation of the artistic work I have been doing all these years and establishes my place in African American history,” he says with pride. “There’s nothing like being recognized by your own people. It is akin to my Academy Award or my Super Bowl trophy.”

Curiously Allen’s art is neither warmly reviewed nor widely applauded by many Atlanta art aficionados.
“I do think that Mr. Allen is a talented artist. The best however ???????,” opines Atlanta art collector James W. Jackson.  “Atlanta is a community that is privileged to have a significant plethora of talented artistic talent. Some of their works have sold for impressive amounts at auction. Some artists have been given major exhibition at galleries. Some have works in major museums and  several major collections. A few have had major exhibitions at the High Museum of Art here in Atlanta.  At this time, Mr. Allen does not have that pedigree, or track record.
“I applaud the acquisition of Mr. Allen’s work by the Smithsonian Institution National Museum of African American History & Culture,” Jackson continues.  “Their decision to acquire his art work is of note and is important.”

Sports artistry has been Allen’s calling card and ticket to success. Just four years after he started painting in 1992, at the age of 38, Allen was commissioned to paint for the Atlanta Olympic Games. Prior to that he had been a copier technician or as he says, “I was the Xerox man.” 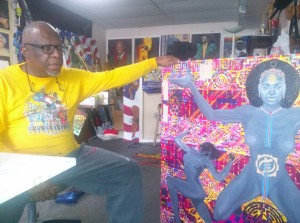 Steve R. Allen with his newest and as yet untitled and unfinished painting in his home studio. Photo: by Maynard Eaton

Steve’s self-taught talent was first showcased before a world audience when he was commissioned to create “Uniting Colors of the World”, a mammoth eighty feet by twenty-eight feet mural, as the City of Atlanta’s “Official” commemoration of its hosting the 1996 Centennial Olympic Summer Games. In the entire world he holds the singular honor and distinction of being “Official Artist” for the Host City of the 1996 Centennial Olympic Summer Games, he says. Allen’s art has since been exhibited in eight Olympic Games.

“That’s just the way it worked out; it was not intentional” Allen says about his successful emphasis on sports painting. “Once the Olympics came about everything else started rolling. I am now considered a Smithsonian and Olympic artist. Not bad for a kid who was born in a one room shack in Norrington Crossroads, North Carolina.” 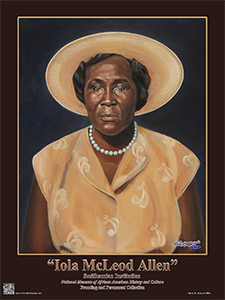 In 2013 at the behest of former Spelman College President Dr. Johnetta Cole, who is now Director of the Smithsonian National Museum of African Art, Dr. Lonnie Bunch, the Founding Director of NMAAHC, dispatched Dr. Jacqueline Serwer, the Smithsonian’s Chief Curator of the National Museum of African American History and Culture, and Elaine Nichols, the Smithsonian’s Senior Curator, to visit Allen’s quaint Collier Heights home basement studio. They decided to acquire two Olympic pieces from the 2004 Athens Games and the 2006 Games in Torino, Italy; along with a poignant portrait of his grandmother Iola McLeod Allen and a collage featuring President Obama entitled “Freedom Full Circle”, which chronicles America’s and African Americans’ journey culminating in President Obama’s election.

“I didn’t know enough about it to be scared or how you go about doing it,” Allen recalls about how he quit his day job to begin pursuing a career as an artist after viewing the art work presented at Atlanta’s ’92 National Black Arts Festival and deciding he could be just as good, if not, better. “The first painting I did was called “Come Monday”. It had to do with my grandmother and them out there washing their clothes in those big iron pots. I sold it a couple of months later for $600 to Solomon Williams, a construction management consultant.

“I knew absolutely nothing about the art business,” Allen continues. “I never went to school for art at all, no business training or artistic training at all. I didn’t know I had the skills to do it. I just stepped out on faith.”

That chutzpah has paid off handsomely 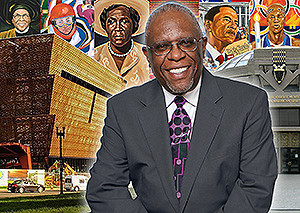 Steve is currently working on an exhibit for the Charles H. Wright Museum of African American History in Detroit. Until the Smithsonian opens it is the largest of its kind in the country. The museum is currently celebrating its 50th anniversary.

This is the 80th anniversary of the Berlin Olympics and Allen’s signature piece for the exhibition is called “An African American Paints the Olympics”. It is a one man show.

“It is going to be a retrospective of Jesse Owens winning the four gold medals,” he tells this reporter. “Most people don’t know that out of the 15 gold medals awarded for the track and field athletics for those Berlin Games, eight were won by African Americans. That was the big Hitler games and the Aryan superiority. Some of the [racially charged] headlines from that event will be incorporated in this piece. We all heard of Jesse Owens but we don’t really know his story, plus we don’t know that this was the first time that African American women competed in the Olympic Games.” 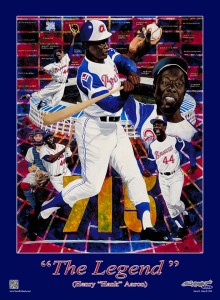 Allen says he routinely works on three, four or five art pieces at the same time. “To me it’s just natural to go from one to the other. I used to think something was little wrong with me because I don’t work serially. I see it all at the same time. I don’t try to put any governor on it, I just let it go. By my not being trained, that means I was not put into a box. Most artists do one style and that’s what they are known for.”

Steve R. Allen paints in a variety of genres ranging from sports to portraits to whatever he is led to create.  He is a quintessential born and blessed Black artist, but is he Atlanta’s best?