The Public Storage self-storage facility whose demolition and replacement with a new facility in Virginia-Highland is key to the Garden's expansion plan. (Photo by John Ruch.)

The Atlanta Botanical Garden expansion is one of those acts of Atlanta’s political gods that gets presented from their heavenly view as coloring in relatively blank spots on the map. Down at the human scale, however, there are many details in flux and lives in transition.

There are displaced businesses that may or may not make it elsewhere. There’s the historic building that will be saved, and others marked for demolition. There’s the huge self-storage facility that may go away, and a huge cell antenna tower that won’t. 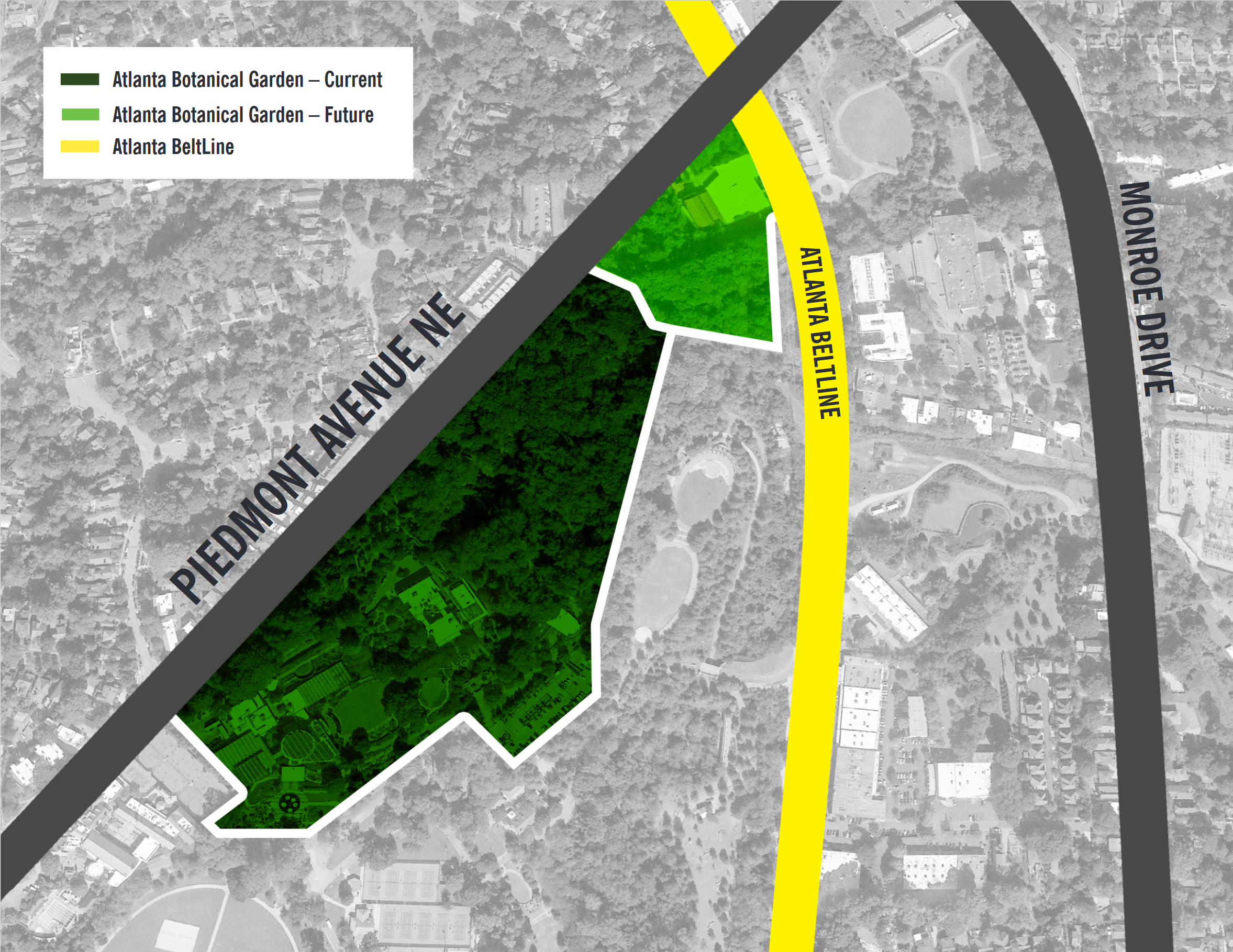 An Atlanta Botanical Garden map showing the general area of its expansion plan.

The tradeoffs extend to the project’s unusual mix of backroom deal-making and public flag-planting. The Garden expansion and a separate but related plan to grow Piedmont Park were drawn up secretly among corporate powers and City Hall more than five years ago. But in late 2017, then-Mayor Kasim Reed announced the plans at a press conference while a majority of the land was still in private hands. That undoubtedly jacked the real estate prices, but at least gave tenants and the public a heads-up, and perhaps has scared off commercial developers.

The top-down plan was explained by Reed and the Garden at the time as necessary to essentially defeat the City’s own planning and zoning policies and the mega-development they are causing along the Atlanta BeltLine, the trail and transit line that runs right through the park. The gist was that if the land doesn’t become parkland, it will definitely become something else that could wall off access to existing green space, among other, less predictable impacts. With the Garden’s announcement last month on progress toward its expansion, that rationale remains the same.

“If we don’t invest in this expansion now, we’ll have a Garden cut off from our city’s primary pedestrian- and cyclist-friendly thoroughfare by a concrete warehouse or high-rise – or worse,” said Garden spokesperson Danny Flanders.

But again, details you can’t see from sky-high matter, and none are currently bigger than how the plan itself calls for erecting a concrete warehouse elsewhere on the BeltLine. Crucial to the expansion and its BeltLine access is getting rid of that self-storage facility. The only way to do that, the Garden says, is a land swap — announced last month — that would build a new self-storage facility along the BeltLine in Virginia-Highland, just outside the park. The Garden calls that a low-impact trade-off, while neighbors call it inappropriate and are infuriated the plan was dropped, in a classic power move, when everyone was distracted by the Thanksgiving holiday.

The Garden is a private, nonprofit horticultural organization known for its gardens, greenhouses and topiary-like plant sculptures. Formed in the 1970s around an existing garden space, it currently occupies about 30 acres in the northwestern section of Piedmont Park along Piedmont Avenue under a long-term lease with the City dating back to 1980. 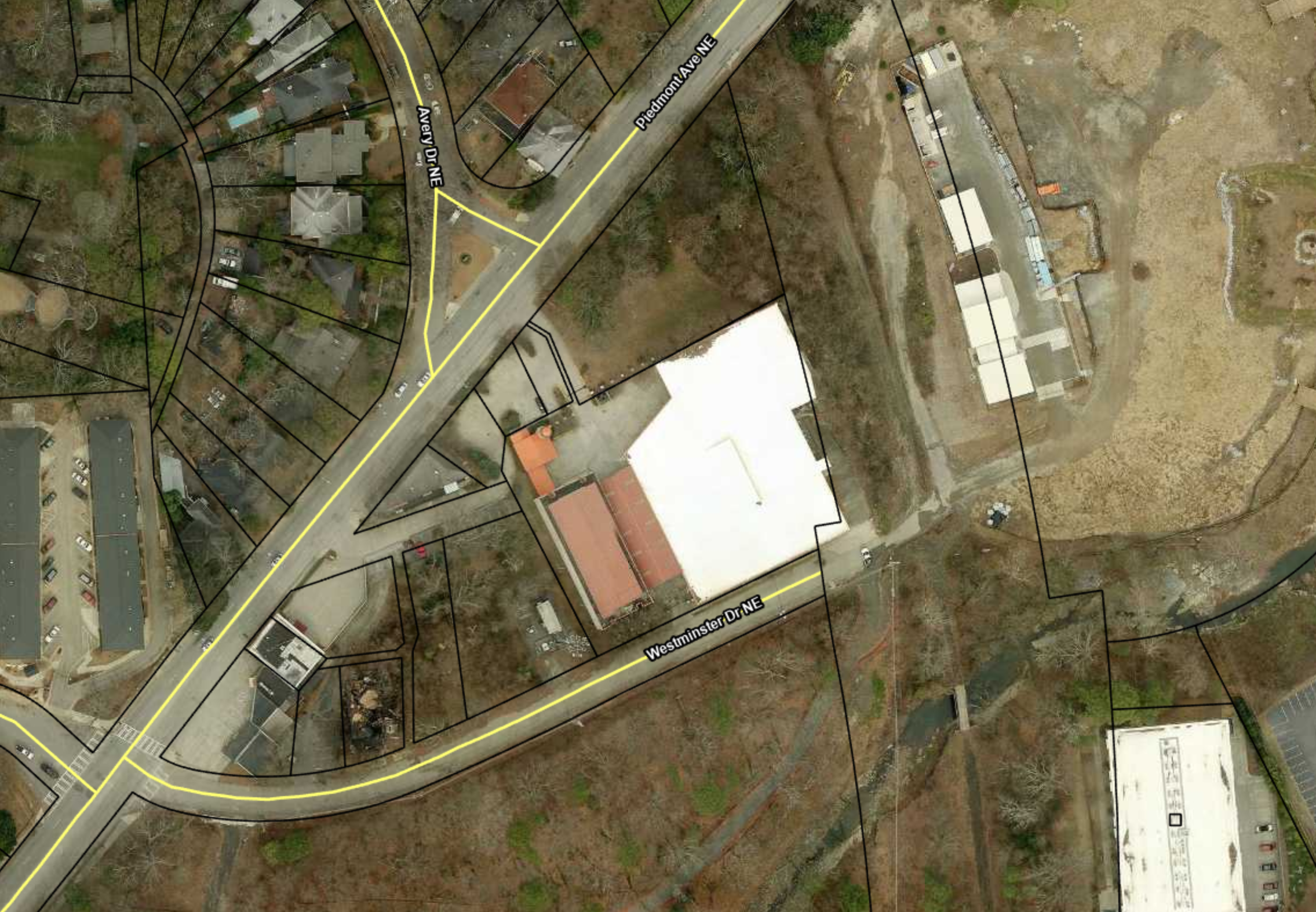 A Fulton County property records aerial view of the Garden expansion area, including Piedmont Park at bottom and the triangle of Piedmont Avenue, Westminster Drive and the Atlanta BeltLine. The large structure in the center is the self-storage facility that is key to the plan.

The expansion, the Garden says, would add almost 7 acres to that footprint. The plan includes extending further into the park’s Northwoods area, and also onto a triangle of land bordered by Piedmont Avenue, Westminster Drive and the BeltLine. That’s where the BeltLine’s Northeast Trail — which is under construction — and the Piedmont Park Trail converge. It’s also just down the block from the Piedmont and Monroe Drive intersection, where the park expansion is planned. That plan remains in a mysterious state, but the Garden recently acquired a property on Monroe as some type of contribution.

The Garden aims to finish the expansion by 2026, its 50th anniversary and the year Atlanta is scheduled to host some World Cup soccer tournament games. Aside from the goal of a prominent new entrance on the BeltLine, the concept remains preliminary and conceptual. However, it is not expected to mean major changes for the existing Garden, where such features as the main entrance at Piedmont and The Prado will remain.

“We are not in the design phase yet, but don’t expect the expansion to impact current design, amenities and features of the existing 30-acre garden,” said Flanders.

The Garden’s current 50-year lease was executed in 2017, and Flanders said it is not expected to require revisions for the expansion.

That part of the park is wooded and draws wildlife to the larger area. On a recent SaportaReport visit, a hawk swooped to nearly ground level on Westminster and perched in a tree on the park’s border.

As for that Piedmont/Westminster triangle, it contains some businesses and several vacant parcels. The Garden – under its property acquisition company called Pine Dear Creations – has already bought all of the properties except for the self-storage facility, owned and operated by California-based Public Storage.

Some of the vacant parcels are wooded and, especially along Westminster, spotted with trash and litter. Most of the trees appear to be relatively young, though some large ones stand out, including an oak in a central driveway known as Piedmont Way.

Besides the self-storage facility, three commercial buildings line Piedmont on the triangle. One at 1447 Piedmont houses the Boy Next Door men’s clothing shop and previously also was home to a salon that has moved elsewhere in Midtown. Another at 1433 Piedmont houses the Fashionaid Dry Cleaners. The third at 1425 Piedmont has two storefronts. One has remained vacant since the restaurant Eclectic shuttered several months before the 2019 property sale and is now used by the Garden as storage. The other houses a public relations firm called Blue Hominy.

Boy Next Door and Fashioned are well-established businesses that have been there for decades. Both said the Garden has been upfront with them about the property purchase and their eventual displacement from the start. But it’s obvious that moving is a bigger deal for a dry cleaner than for a clothing store.

Boy Next Door has been in the building since 1980 under various owners and is now planning to move at year’s end, according to Jeff Giles, who partners with one of the current owners in a business selling products through the shop. Giles called the move “bittersweet” but a “game-changer.” That’s because the shop, which caters to a gay clientele, is heading to 1000 Piedmont Ave. at the intersection of 10th St. and Piedmont, the heart of Atlanta’s – and in many ways the entire Southeast’s – LGBTQ community.

The historic building at 1447 Piedmont will be preserved as part of the expansion, the Garden says. (Photo by John Ruch.)

“There’s nothing negative about this whatsoever except the pain of remodeling,” he said. “So far, all of the customers have told us they are super-excited about where we’re moving. They all live there. Midtown has changed dramatically.”

“It’s bittersweet. You have to walk away from a space that’s been here for 42 years,” he added. “But in the end, it’s a shell. The memories go with you, and you make new memories.”

At Fashionaid, which has operated for nearly 30 years, owner Christina Pak declined to comment on the record but said she has talked with the Garden about help in finding a new location.

While Boy Next Door will go, the Garden says its historic building will remain. A quirky, wedge-shaped brick structure, it includes such architectural details as a leaded-glass window. Online property records date it to 1920, but are not always a reliable source; Giles said the shop owners believe it dates to the 1890s. Flanders said the Garden isn’t sure what it will do with the building but wants to keep it. 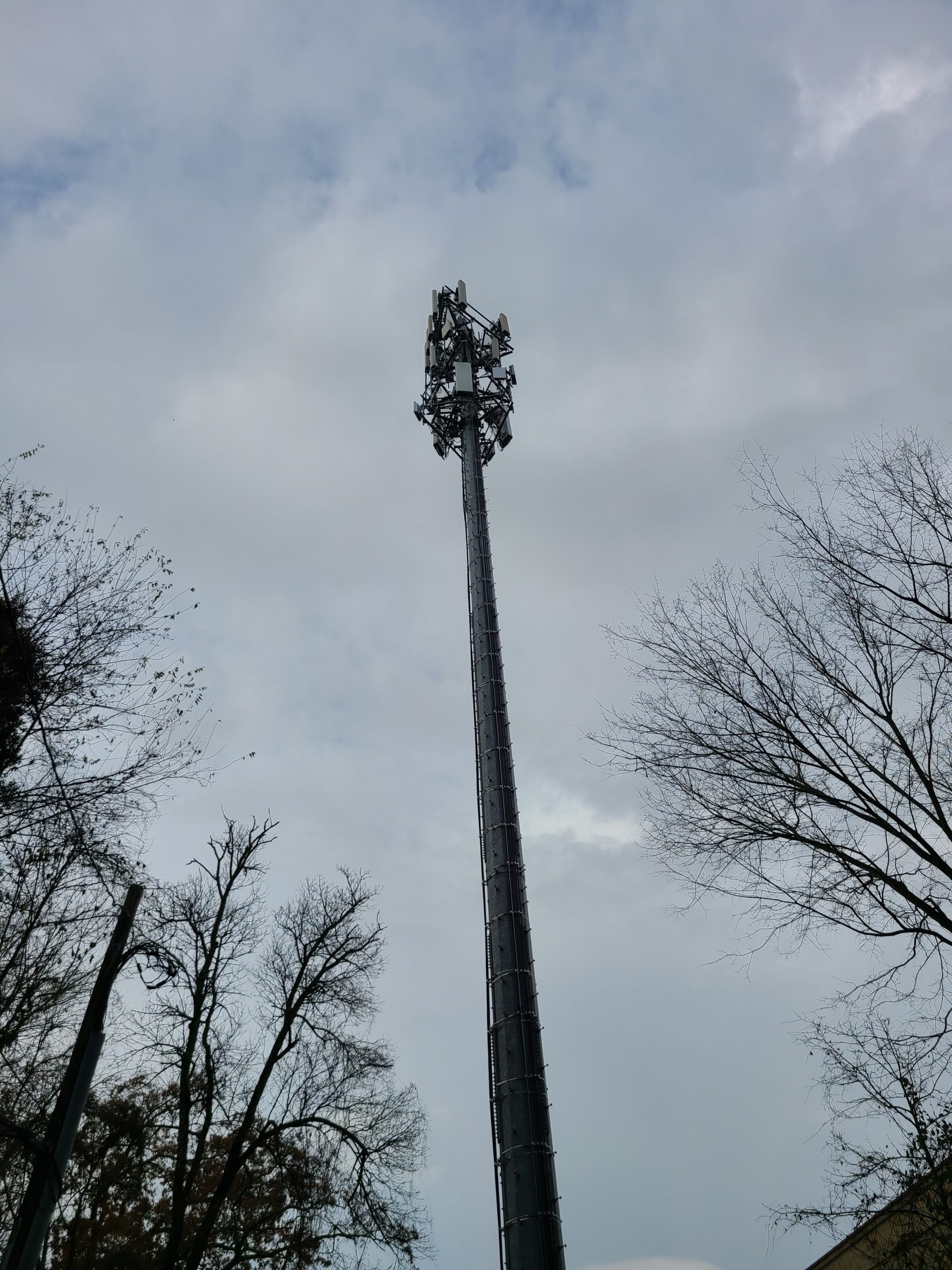 The cell antenna tower that will remain within the Garden expansion. (Photo by John Ruch.)

“It’s just such a charming little structure …it would be a shame to not somehow incorporate it into the plans for the new gardens,” he said.

The other buildings are pegged for demolition, though they also are relics of the past. Property records also date Fashionaid to 1920 and the 1425 Piedmont structure to 1945. Another relic on the site is a stone wall on a vacant lot at 244 Westminster that may be part of the foundation of a demolished building.

Assuming the land-swap deal works out, the self-storage facility would be the biggest demolition on the site. Built in the early 1990s but incorporating a warehouse that dates to 1949, according to property records, it is a series of concrete blocks featuring a decorative lighthouse – a standard symbol of the storage business.

While getting rid of that facility is key to the Garden’s vision of a grand BeltLine entrance, there’s another structure right next door: a cell tower that stands perhaps 70 feet tall and is surrounded by chain-link fencing topped with barbed wire.

And it seems there is no land-swapping out of that one, as Flanders says, “the cell tower stays.”

The section of the Atlanta BeltLine’s Northeast Trail under construction adjacent to the Garden expansion area. (Photo by John Ruch.)

Boy Next Door staff member Victor Perez, left, and Jeff Giles, business partner of an owner, pose inside the clothing store, which is moving to the 10th and Piedmont neighborhood. (Photo by John Ruch.)

A hawk perches in a tree along Westminster Drive on the edge of Piedmont Park. (Photo by John Ruch.)

A leaded-glass window is among the architectural details on the 1447 Piedmont building. (Photo by John Ruch.)

The convergence of the Atlanta BeltLine and the Piedmont Park Trail on the edge of the Garden expansion area. (Photo by John Ruch.)

A stone wall remains on a lot on Westminster Drive. (Photo by John Ruch.)