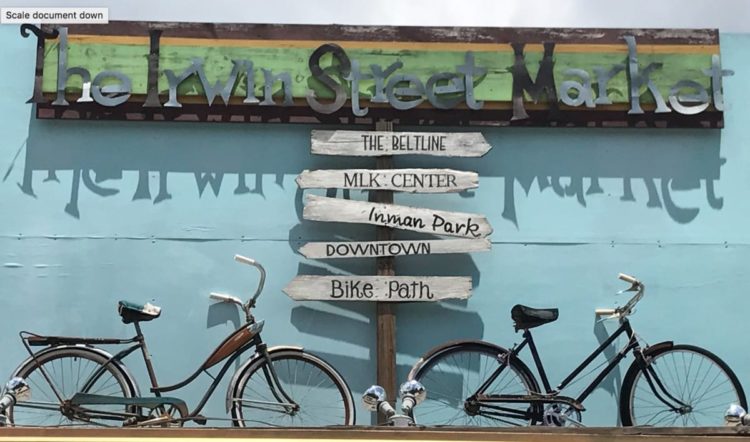 Note to readers: This is the second of two stories about affordability along the Atlanta BeltLine. Previously: Incentives proposed to preserve affordability of homes, shops … 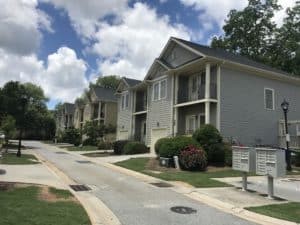 Located near the Atlanta BeltLine and Krog Street Market, Irwin Place was developed as mixed-income project by ANDP, a non-profit developer of affordable housing. Units that were priced up to $300,000 are valued significantly higher today by Fulton County’s tax assessor. One unit is valued $624,200. Credit: David Pendered

The breadth and volume of the discussion may be as stunning as the price hikes reported along the BeltLine by Dan Immergluck, now a professor at Georgia State University’s Urban Studies Institute, and Tharunya Balan, a graduate student in Georgia Tech’s School of City and Regional Planning.

In completing this analysis, Immergluck is returning to a topic he first explored in a 2007 report, which included policy recommendations, conducted for Georgia Stand-Up: The Beltline and Rising Home Prices … and Policy Recommendations to Minimize Displacement.

In February, the academicians issued a report titled, An Analysis of Home Price Trends Near the Atlanta Beltline, 2011 to 2015.

The report showed that housing prices rose steeply in each of the BeltLine’s quadrants during that four-year period ending in 2015. The following rates of increases compare to median sales prices rising in the rest of the city by 17.7 percent: 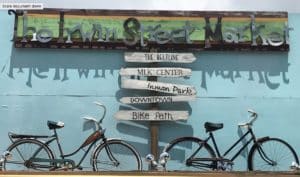 Immergluck said it’s not surprising to find such steep increases adjacent to a major civic development. What is surprising is the dearth of public policies to help current renters of homes and shops to weather the price hikes.

“If we’re going to do this project, major price increases are inevitable,” Immergluck said. “We should be having in place policies that really accommodated the housing market right from the beginning. Now we’re in a position of trying to play catch up. But because prices are already taking off, the money won’t go nearly as far.”

It may be the case that the horse is already out of the barn when it comes to preserving affordability in BeltLine neighborhoods.

For example, the price hikes in the Southwest quadrant are noteworthy because they indicate speculators have already arrived to scoop up houses at a price point perhaps appropriate for a blighted neighborhood, but not one in the path of a major urban renewal project.

Nonetheless, the discussion of affordability may be at its highest level since 1991, when Atlanta and Metro Atlanta Chamber created a non-profit to promote affordable housing. The Atlanta Neighborhood Development Partnership has since created more than 8,000 units of homes affordable to those of low to moderate income. 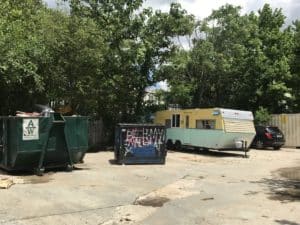 An undeveloped lot a half-block north of Irwin Place, on Sampson Street and adjacent to the Atlanta Bicycle Barn, retains the grittier nature of the once-blighted neighborhood. Credit: David Pendered

One ANDP project that’s seen an unexpectedly steep price hike is a stone’s throw from the BeltLine, near Krog Street Market. Irwin Place was intended to demonstrate that a mix-income housing development in a transitional neighborhood could attract buyers. Completed in 2006, prices for the 17 units in Irwin Place ranged from $250,000 to $300,000. Fulton County tax records show values had fallen to about $185,000 in 2009. This year, the county has valued units starting at about $362,000.

The City for All campaign may have a hand in the city hall candidates focusing on affordability. The group’s central mission is to ensure that affordability is an issue in the 2017 Atlanta elections for mayor, city council president and councilmembers.

Not to mention the Atlanta Regional Housing Forum, which several candidates have already attended to state their interest in finding solutions. The topic of the group’s June 6 meeting is the potential of reviving older structures in order to provide affordable homes. 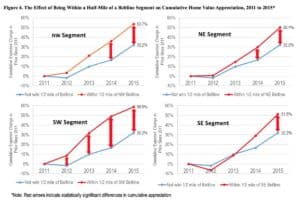 These charts show the increase over time of homes sold. The data is controlled for any changes in the types of homes being sold. The graphs illustrate the appreciation of constant-quality homes. Credit: ‘An Analysis of Home Price Trends Near the Atlanta Beltline, 2011 to 2015’

The TransFormation Alliance has a stated goal of leveraging 5 percent of the transportation sales tax revenues in Atlanta into a $125 fund for what it calls “equitable transporation oriented developments.” ETODs could provide thousands of affordable homes located within easy access to MARTA, the group says. The alliance’s partners include Southface, MARTA, Georgia Stand-Up and ANDP; its sponsors are the Ford Foundation, JP Morgan Chase, SunTrust and Wells Fargo.

Bruce Gunter, a longtime developer of affordable homes, provides an extensive list of specific topics related to affordability. The information, complete with links to the various groups, is available on a website page of Gunter’s company, Civitas Housing Group.

It’s always been the case that the BeltLine was expected to drive up property values.

The entire financial structure of the BeltLine is based on the premise that rising values will enhance property tax revenues. These increased revenues are paying for the new trails and other features that make the BeltLine such an attractive civic amenity.

The social costs of the BeltLine are becoming glaringly apparent.

This table in Immergluck’s latest report on housing values along the BeltLine shows the shock of the property tax increase will fall heaviest on those with lower- valued homes. Credit: ‘An Analysis of Home Price Trends Near the Atlanta Beltline, 2011 to 2015’

“We’ve spent a huge amount of civic capital, as well as a large amount of financial capital, on this redevelopment project, and it’s had a lot of good outcomes,” Immergluck said. “But it’s not benefiting everyone and, for many lower income folks in and around those neighborhoods, it has created a lot of housing stress.”