From a murky community survey to an unhappy resident’s lawsuit, a proposal to protect Atlanta’s Ansley Park neighborhood with an official City historic district has become a classic preservation debate.

It’s also an urgent one, as Ansley Park is right up there with Sweet Auburn and Candler Park as candidates for the dishonor of becoming Atlanta’s first neighborhood to be de-listed from the National Register of Historic Places, especially due to original homes being torn down for supersized McMansions. In a rapidly redeveloping Atlanta, Ansley Park is among the flashpoints where new Planning Commissioner Jahnee Prince faces the huge task of reconciling City policies of preservation, density and affordability. But it’s also an example of a realistic potential to do just that, as the neighborhood already mingles notable mansions and historic apartment buildings. 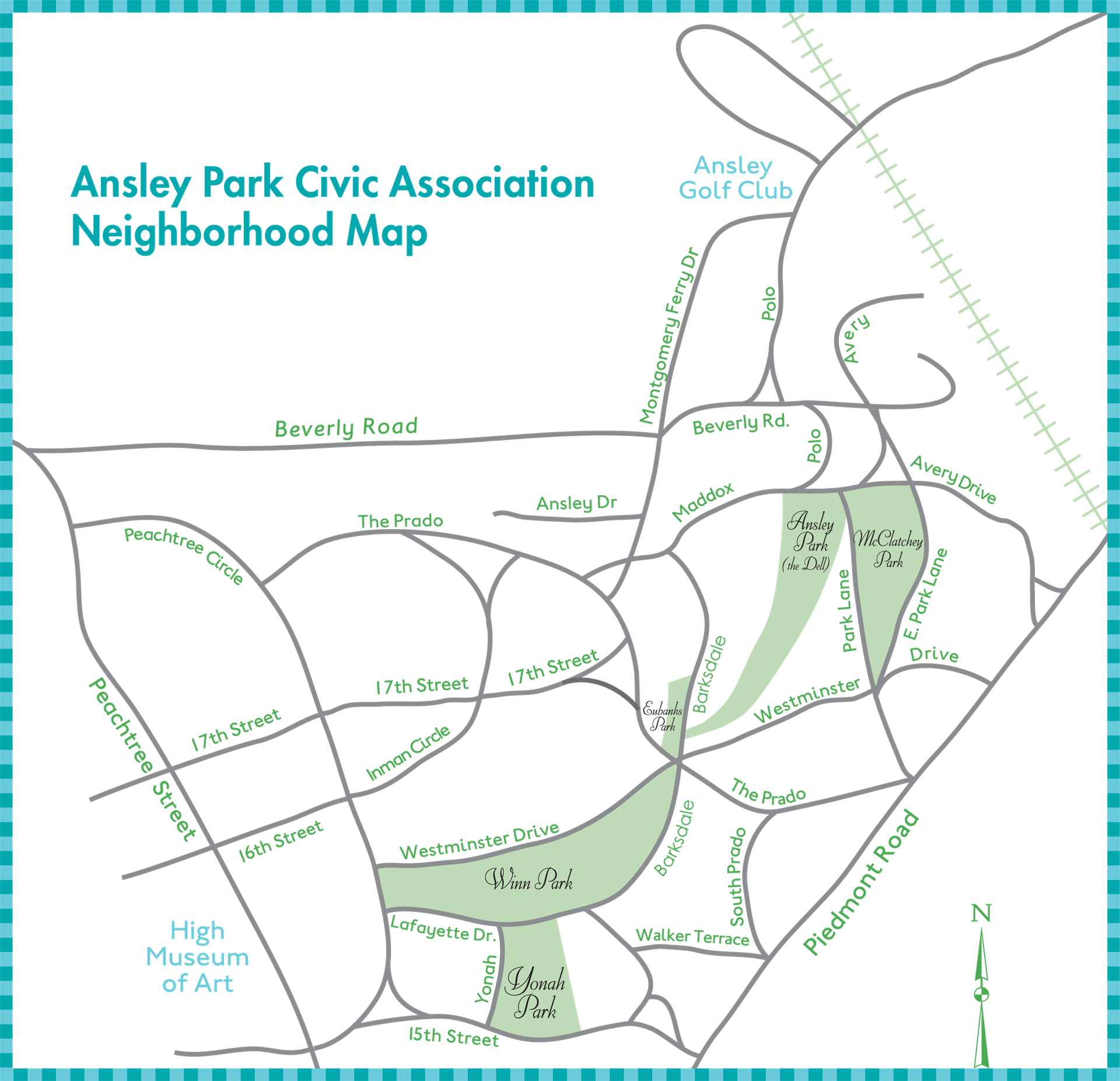 As it is, Ansley Park now has warring tribes. There’s Ansley Park Forever (APF), has proposed the historic designation to supervise building changes. APF is a committee of the Ansley Park Civic Association (APCA), which successfully nominated the neighborhood to the Georgia Trust for Historic Preservation’s 2022 “Places in Peril” list of endangered resources. On the other side is Advocates for Ansley Park (AAP), which favors the rights of individual property owners to protect their buildings or not. One of its members, Andrew Maurer, is suing the APCA over the issue.

As with all preservation debates, a fundamental question is: Preserving what for whom? For the APF, it’s about future generations’ enjoyment of the fine buildings and landscapes from one of Atlanta’s first car-oriented suburbs, dating to 1904.

“As the Georgia Trust points out, Ansley Park is at the tipping point,” says APF chair Jennifer Friese. “Further demolitions and inappropriate infill could make us lose the valuable protections of being listed on the National Register of Historic Places and could make us ineligible in the future to qualify for local historic designation.”

However, Ansley Park has another type of history: zoning and deed restrictions that deliberately excluded early residents by race and class. Recent City policy concepts for higher-density and affordable housing in such single-family neighborhoods – partly proposed to remedy such old inequities – were strongly opposed by the APCA in a campaign separate from, but directly cross-referenced with, the APF effort. Maurer, the AAP leader who sued APCA, says he thinks a historic district’s ability to override local zoning and property owners’ individual plans is the real motivation.

“This whole thing got started not because the people leading it are so concerned with history. They’re concerned with the wrong type of people moving into Ansley Park,” Maurer says. He calls the approach “similar to when the neighborhood was built and they advertised, ‘No Blacks and Jews,’ and there’s people who still feel that way.”

Friese counters that the neighborhood already has a “diversity of housing options and naturally occurring affordable housing… for all ages and stages of life” that a historic district would protect, rather than seeing them “replaced by larger and more expensive homes.”

Indeed, Maurer says the possible changes he wants to reserve for his own house on 17th Street, which dates to 1910, is not about multifamily housing, but rather a “complete rebuild.”

However, Friese also referenced an APCA newsletter article about the proposal that focused on Atlanta BeltLine and City zoning as an existential threat for possibly allowing widespread multifamily housing. That is echoed by the APF website, whose “background” statement focuses on a historic district’s ability to “supersede all other zoning like the BeltLine Overlay or future attempts to up-zone” and thus “shape the destiny of Ansley Park.” The website of the APCA’s separate “Save Ansley Park” effort against some of those zoning ideas, as well as the Comprehensive Development Plan and current tree ordinance, refers to the APF effort as perhaps “the only route to exempt us from current and future attempts to kill our neighborhood.”

It is true that Ansley Park, like many intown neighborhoods built before the 20th century’s homeownership boom, has historically significant apartment buildings, carriage houses, and similar structures – including the well-known Villa apartments. The type of historic district APF has in mind could allow for new buildings of similar scale – which is roughly the idea the City has proposed near MARTA stations as transit-oriented development. That makes Ansley Park an unusually good opportunity for seeking ways to reconcile the old and the new.

Ben Sutton, the Georgia Trust’s director of preservation, says “a lot of these historic intown neighborhoods already have a lot more dense housing than you find in any suburban environment. And we don’t think that density and preservation are incompatible. A local [historic district] designation should not necessarily prohibit dense development. But it would prevent poorly designed or out-of-scale dense development.”

Located just northwest of Midtown’s Piedmont Park, Ansley Park was named for developer Edward Ansley and includes many structures built by prominent architects, as well as such landscapes as the Ansley Golf Club. Racial conventions were used to prohibit Black people from buying property there, as noted in such books as the recent “Red Hot City,” as well as less explicit exclusionary zoning tactics such as minimum lot sizes to shut out people by race and class. Shortly after Ansley Park was built out, in 1922, the City instituted a segregation-minded zoning code whose effects the City was in part attempting to rectify under those controversial multifamily zoning proposals under previous Planning Commissioner Tim Keane.

Ansley Park has been a historic district on the National Register since 1979. That is a largely honorary designation that does not prevent individual owners from tearing down or altering structures that are listed as contributing to the historic nature. It does make owners eligible for tax credits and grants related to preservation. It also ensures a review of historic impacts on some federally funded projects – such as highway construction, which has been a threat to the neighborhood before.

In 2015, the National Register listing was updated to remove dozens of properties that were no longer considered contributing due to alterations or demolition. The district was expanded in some areas but also reduced in others to completely remove some structures.

Sutton works at the Georgia Trust headquarters on Midtown’s Peachtree Street, just across the road from Ansley Park. He says “that neighborhood is experiencing more teardowns than I have ever seen in a historic district. And that has not abated at all over the last year or so.”

To Maurer and the AAP, that’s a reason not to pursue a historic district. “Half the houses basically are new,” he said. “The historic preservation train left the station a long, long time ago.”

But to APF and the Georgia Trust – which Sutton says would support the designation – it’s more like the last chance.

A City historic district designation, unlike the National Register version, would protect buildings from changes. Owners of contributing properties would have to seek certification from the Atlanta Urban Design Commission for demolition or a variety of exterior changes. New construction also could be mandated to match the massing and character of nearby historic buildings and streetfronts. The details could vary depending on the type of designation. APF has been working with the City’s Historic Preservation Studio on the concept and draft “interim controls” – something the City does for any serious petitioners without necessarily advocating for the result.

According to the APCA, the idea originated in 2019 from teardown concerns, then spun out in early 2021 into the APF effort, which has included community presentations, newsletter articles and similar “educational” items. But APF appears to be struggling to gain neighborhood consensus.

A recent “sentiment survey” of APCA members – which does not include all Ansley Park residents – had mixed results. It found a slim majority of overall voters opposed to the historic district concept, but also a slim majority of owners of potentially contributing properties to be in favor. APF’s Friese says “the survey results gave a very mixed message. We are considering our options.”

APF is also facing opposition from the AAP, which argues that a historic district is an unacceptable intrusion on private property rights and that owners should be free to seek individual building protections. Indeed, one homeowner on 17th Street just did so via a Georgia Trust preservation easement, according to Sutton, so that it won’t be torn down if she moves or dies.

Maurer – who is not an APCA member – filed his lawsuit in August against the APCA and its board. He claims the APCA is violating its articles of incorporation by engaging in “propaganda” and an attempt to influence legislation, thus harming his property rights with authority it does not have. He also claims the “sentiment survey” vote was a “sham” and “artifice” that did not represent the neighborhood and was set up to devalue the votes of condo owners, among other issues.

The defendants have filed a motion to dismiss, claiming Maurer lacks standing to sue, misunderstands the articles of incorporation and the APCA’s educational campaign, and is arguing a moot point about the vote. Maurer says he is not dropping the lawsuit and is prepared to “go full scorched earth.”

It’s unclear if the lawsuit is having a direct effect on the APF’s work. “Ironically, the lawsuit prevents me from commenting on the lawsuit,” said Friese. “Funny how it stifles public discourse.”

The APCA certainly has a history of zoning advocacy, as the 2015 National Register update notes. In 1964, it hired planners to conduct a “conservation study” that led to a zoning and code enforcement crackdown to push out rooming houses, halfway houses and commercial development. It quotes an APCA attorney at the time as saying that “the policy basically was, ‘No commercial development in Ansley Park’ and to reduce the density of the residential property.”

That go-it-alone approach may be another historic legacy still reverberating today. The APF hired a consultant with the firm TSW to help draft the potential historic district draft language. Maurer says he’s among many residents able to launch lawsuits in “a neighborhood full of wealthy, aggressive people.”

While the City has advised APF on the draft language, that is siloed from other zoning proposals and it is unclear whether the new administration even will pursue some or all of the multifamily concepts. District 6 City Councilmember Alex Wan, according to his chief of staff, is not satisfied with the “sentiment survey” and will support a historic district proposal only if it is backed by a “supermajority” of residents. Preservation groups are providing advice but, aside from the Georgia Trust, not directly advocating for a particular approach. “The Atlanta Preservation Center is watching this process and is hopeful it will achieve something positive for preservation in Ansley Park and Atlanta,” said that group’s executive director, David Yoakley Mitchell.

As the APCA newsletter recently noted, “The goal of historic preservation is not only to preserve the physical beauty of a building or district – but also to preserve the soul, spirit and values of a community.”

But how are those defined and combined in a neighborhood that clearly has a history of achievements and housing variety worth saving and a legacy of exclusion that is not? How does a historic neighborhood on the “tipping point” of demolition get preserved within a city on a tipping point of unaffordability? And is there a way to get an answer besides a battle among residents wealthy enough to plan and sue?