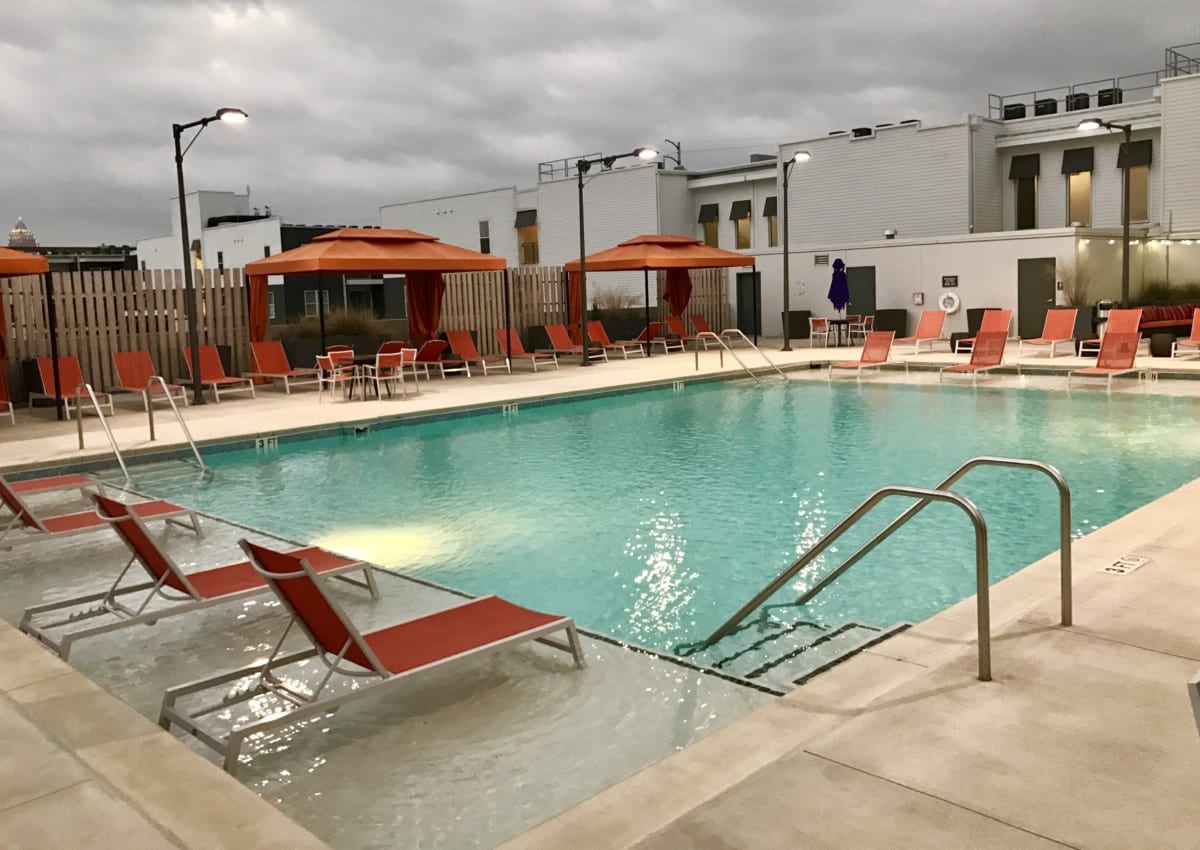 Rental rates for newly built apartments in Buckhead and Midtown now exceed $2.60 a square foot, and a new report from CBRE says the demand exists to fill the units. Meantime, the report observes gentrification and rising prices are concentrated east of Midtown/Downtown. 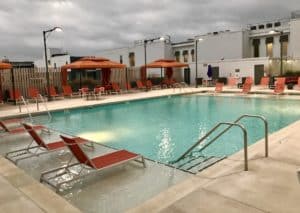 A taste of Miami Beach – chaise lounges set on a submerged pool deck – is available in a building in east Buckhead, located on Piedmont Avenue, where apartment rental rates for a two-bedroom unit approach $3,000 a month. Credit: Kelly Jordan

As the CBRE report states of rental rates:

As the CBRE report states of gentrification:

These observations highlight the impact of public subsidies that once encouraged developers to build high-end apartments. 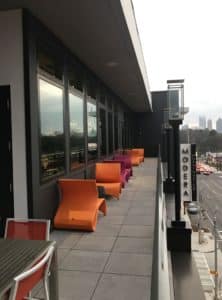 Life doesn’t get more hip than Modera Morningside. The Midtown skyline is in the background, a Sprouts health food supermarket is on the ground floor, and a marketing team advertises the opportunity to, ‘Be the envy of the town in these fashion-forward, brand new Atlanta apartments, energized by surrounding retail….’ Credit: Kelly Jordan

This high-end market is the one developers courted with inducements formerly delivered by the development authorities in Atlanta and Fulton and DeKalb counties.

For example, in the six year period ending in 2015, about 8,500 apartment units were built in Atlanta with subsidies provided by the Fulton County Development Authority. Of these, 30 units have been set aside for lower income residents, according to a report delivered in May 2016 by Dawn Luke, senior vice president of community development at Invest Atlanta, the city’s development arm.

The Atlanta City Council responded to the issue last year by closing a loophole that enabled apartment developers to use government subsidies to build luxury apartments in Atlanta without reserving any units for lower income residents, in violation of the city’s policy.

In areas outside the city of Atlanta, the issue of affordable housing appears to be less of a factor. The rent-to-income ratio in metro Atlanta is 25.1 percent, CBRE determined. The ratio is up to 30 percent to be considered affordable, according to the federal Department of Housing and Urban Development. CBRE reports the ratio in some cities exceeds 40 percent; the report did not identify these cities.

For reasons unrelated to the shift in housing policy, the era of multi-family construction may be passing, according CBRE’s report. 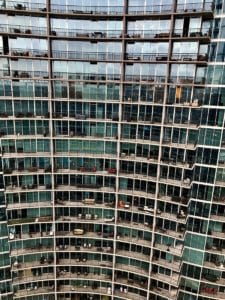 With prices exceeding $2.60 per foot, some renters evidently have decided that balcony chairs, tables, potted plants and other outdoor furniture, aren’t a part of their lifestyle. Credit: Kelly Jordan

CBRE predicts the number of new apartments to be completed in metro Atlanta this year will be well below the peaks of previous cycles.

The rate of construction is expected to drop sharply after 2017, CBRE predicts. Reasons include rising costs for land and materials, construction moratoriums in several cities, fewer financing options, and reduced margins.

This outlook is similar to findings contained in the January edition of the Beige Book, issued by the Atlanta Federal Reserve Bank. The book contains anecdotal information about current economic conditions in the Southeast. Here’s the relevant snippet from the Jan. 18 edition: