The design of the Public Storage self-storage facility in Virgina-Highland as presented by an Atlanta Botanical Garden attorney at a Jan. 18 meeting of the Atlanta BeltLine Design Review Committee.

The Atlanta Botanical Garden’s plan to swap one Atlanta BeltLine self-storage facility for another was raked over the coals on Jan. 18 by a review committee.

The Atlanta BeltLine Design Review Committee (DRC) expressed displeasure with the very idea of putting a self-storage warehouse on the BeltLine in Virginia-Highland, and especially with a lack of retail space. Also unwelcome was the Garden’s stance of seeking retail if the “community” was able to find tenants.

DRC member Stephen Causby, an urban planner, called the project “a use that does not belong on the BeltLine or anywhere near it,” noting the pedestrian orientation of the trail and transit loop around the city. “And I think that this project in whatever form cannot support that, regardless of whatever kind of office or retail it’s wrapped in.” 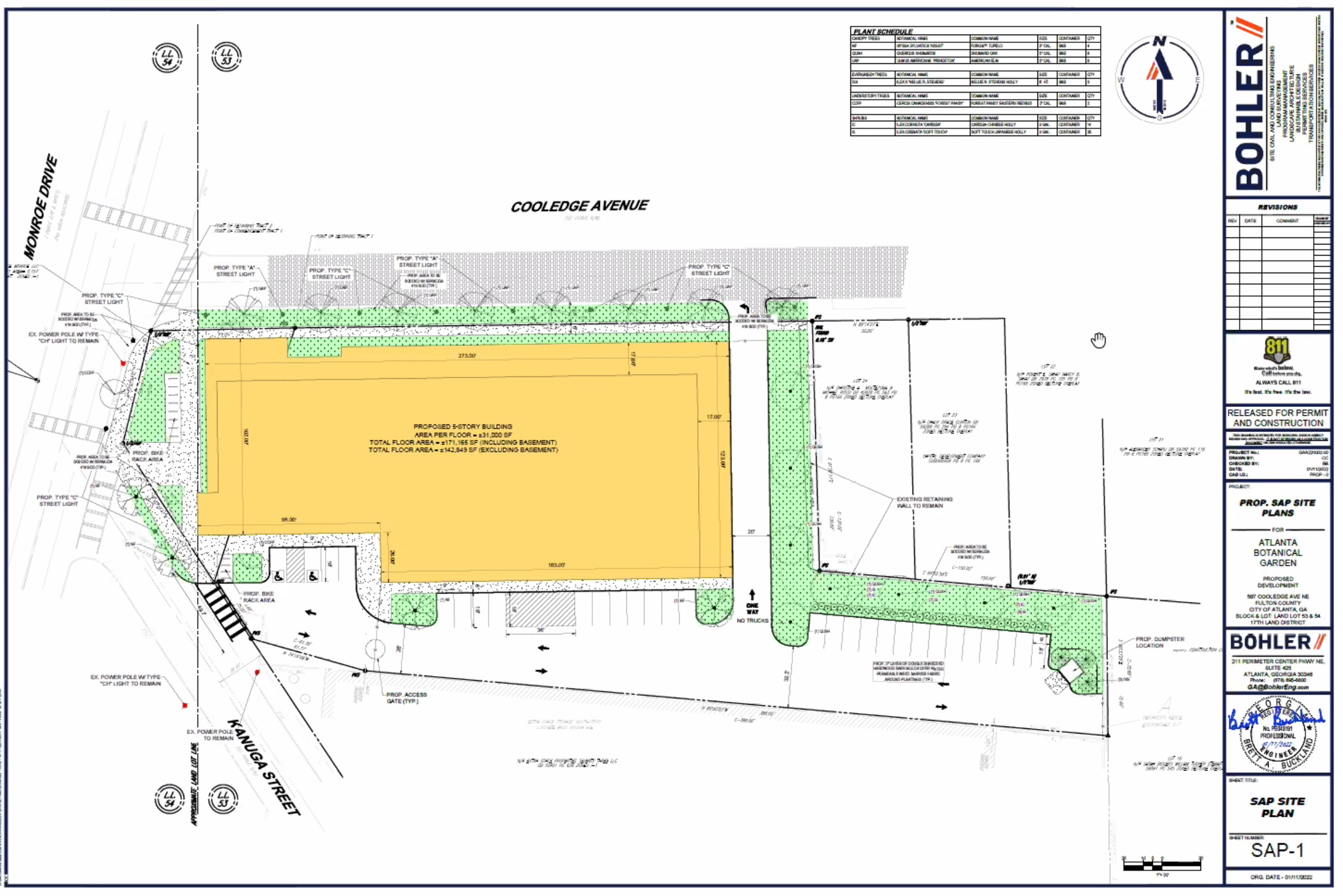 The self-storage site plan as presented at the Jan. 18 DRC meeting.

“I think it’s completely disingenuous for the applicant to say the community needs to find retail for this,” said DRC chair Kevin Burke, who is also the director of design for Atlanta BeltLine Inc. (ABI). “That’s an abdication, I think, of your responsibilities. You agreed to the retail. I think there are innumerable possibilities.”

Kathy Zickert, an attorney for the Garden, said the plan already had been changed in response to community concerns, including by adding office space, which was the sole reason the project has zoning variations up for DRC review. She said she would have to take the criticisms back to the Garden and storage facility owner Public Storage. Both organizations had representatives in the virtual meeting, but they did not speak.

“All of these design changes have been fairly expensive…,” said Zickert, adding that all proposals require Public Storage’s review, “and I just do not have that authority at this moment.”

The Garden, a fixture of Midtown’s Piedmont Park, has a longstanding plan to expand by 7 acres along Piedmont Avenue and Westminster Drive, right on a section of the BeltLine’s Eastside Trail that is under construction. In November, the Garden announced the self-storage swap as key to that plan. An existing Public Storage facility at 268 Westminster would be demolished, and a replacement built on a triangle of land in VaHi where Cooledge Avenue and Kanuga Street meet Monroe Drive (officially numbered at 1011 Monroe and 597 Cooledge.) Also sitting along the Eastside Trail, that property is currently the site of vacant commercial buildings and is next door to an existing self-storage facility from the competing firm Extra Space Storage.

The Garden initially touted the plan as giving it a grand new entrance on the BeltLine, while downplaying the new facility’s impact elsewhere on the trail. Garden President and CEO Mary Pat Matheson at the time of the announcement emphasized the new facility was not directly on the BeltLine – it’s across Kanuga Street – and claimed the secretly developed plan would be good for the neighborhood because of a strong design and low vehicle traffic.

The Virginia-Highland Civic Association (VHCA) disagreed, reacting with fury to the content of the plan as well as its filing shortly before the Thanksgiving weekend when everyone was distracted.

“We’re very cognizant that it’s at a key location…,” Zickert told the DRC. She said that the original plan “was not well-received” by the community and that many design changes have been made, including the addition of the office space and a mural that would tout the Garden.

The Garden, acting as developer on Public Storage’s behalf, is seeking three zoning variations for the project. One involves a decrease in the required sidewalk width on Cooledge to increase tree planting. Another would allow storage within 20 feet of the sidewalk, which the Garden says is needed to fit parking for the office use. The third variation would allow opaque “spandrel” glass to be used to hide the storage units from viewers on the street.

All of those variations, Zickert said, are a result of community-requested design changes. “We’re not trying to cram too much on here,” she said. “We were in total compliance [with the industrial zoning] until we got these requests.”

Another community request, Zickert said, was for a retail component. And, she said, the Garden was committed to pursuing that – including any necessary special administrative permit (SAP) and parking variation. At the same time, she cast doubt on the concept.

“Quite frankly, I’m not sure that this is a retail site” due to the tightness of the property, she said. She suggested some space could be “promotional for the Garden itself” and cited a walk-up ice cream shop and a small bike repair shop as other possibilities. But, she said, “We looked to see if there were users for this space and did not feel we would get anywhere.” Hence the notion of “the community” suggesting viable tenants. 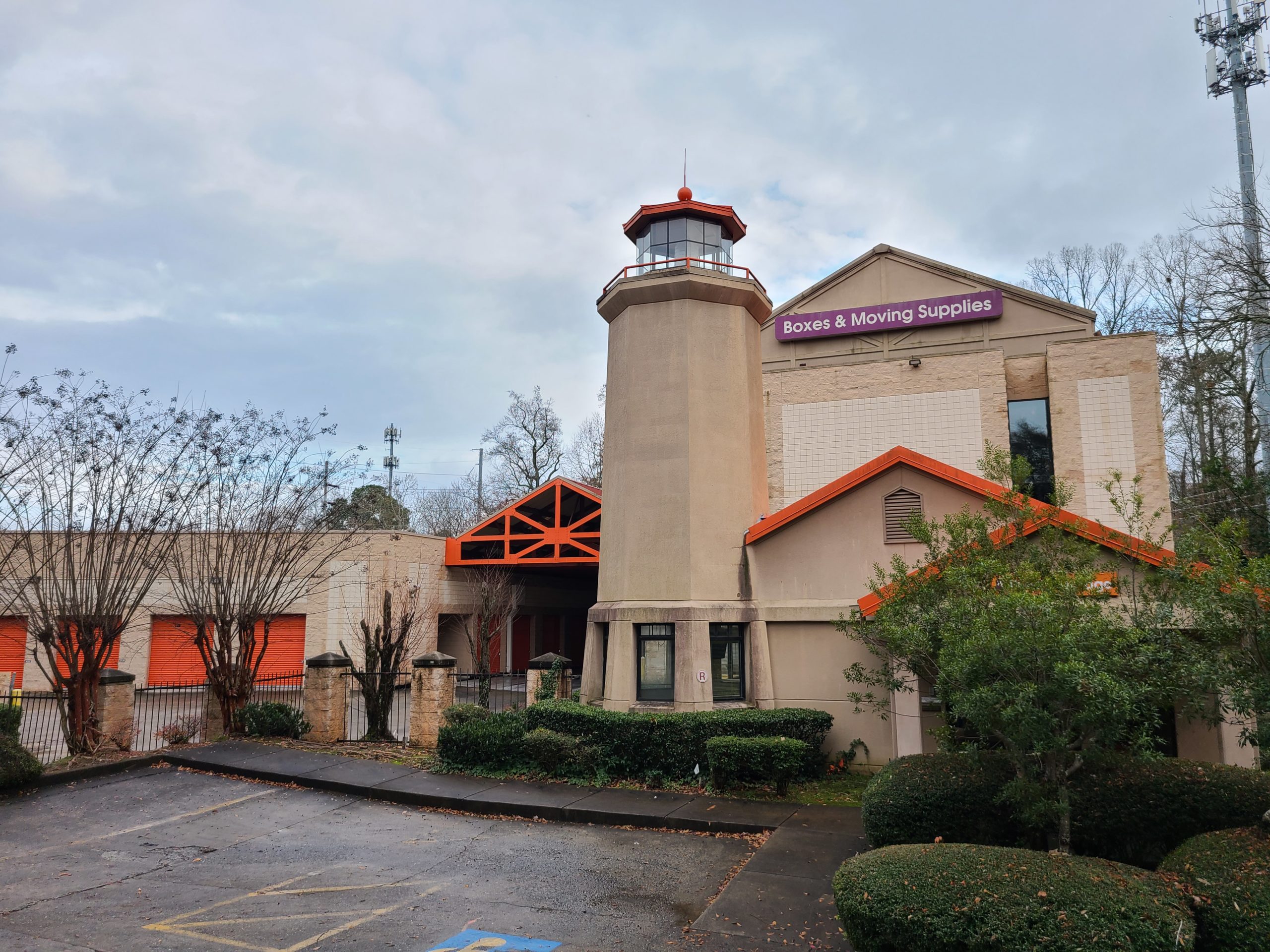 The Public Storage self-storage facility whose demolition and replacement with a new facility in Virginia-Highland is key to the Garden’s expansion plan. (Photo by John Ruch.)

The DRC, which advises the City on BeltLine-area SAP requests, did not buy the argument that getting rid of one BeltLine storage facility and building another BeltLine storage facility could both be great things. The lack of an “active use” was a particular concern, though DRC members had a number of other issues. While Matheson previously spoke of ABI as “very supportive” of the swap, ABI officials on the DRC were among the critics of the replacement concept.

Jay Suever, an ABI senior project manager, said that the Garden expansion is good, “but that doesn’t necessarily mean this answer is the answer.”

“Yes, you are correct in the sense that the building, that type of building, is allowed on this site by zoning – no doubt about it,” added Suever. “But what is not something that we have to do is approve the variation in order to fit the building on the site.”

“I think in this part of town, to have something other than mixed-use… it seems like a missed opportunity,” said Nazeer Kutty, an architect and DRC member. He said he understands it’s allowed under zoning, “but I think it is a disappointment for anyone with an interest in the urban environment, the urban fabric.”

“It’s unfortunate that you had to make a deal with Public Storage to put a storage facility in the middle of a neighborhood,” said David M. Hamilton, another architect on the DRC. “I think it’s not a particularly compatible use.”

He suggested that the facility should be fronted with a residential use like townhomes. Without the residential component, he said, “I can’t support the project.”

Lynette Reid, ABI’s director of planning, staffs the DRC. She said the VHCA shortly before the meeting had circulated alternative design ideas with some “really cool elements,” suggesting that the Garden return to the community for more discussions. She noted ABI has a business pilot program called BeltLine MarketPlace whose startups might want to go into a storefront spot on this site.

Other concerns include design and landscaping elements and a review of a gated driveway that would open onto Cooledge, which is a point of local traffic concern.

The DRC ended up voting to recommend approval of the sidewalk variation and denial of the other two. But the real message was to look harder at retail uses and come back with a different plan.

“I think you all need to engage in this effort and not say, ‘Well, go find us somebody and we’ll put them in this space,’” said Burke, the DRC chair.