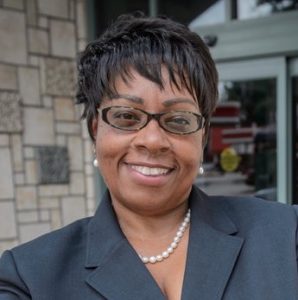 Q: What’s your No. 1 concern about your district?

A: I would say that looking at my inbox, the meetings that I’ve attended all across the district, delivery of city services is the universal concern … be it the condition of the streets or maybe a zoning matter or something involving understanding city processes and procedures. So I would say that the No. 1 thing that I’m getting is in that space.

Q: What can you as a City Council person do about that? What are some of your ideas or proposals?

A: We do have a 311 system that we’re rolling out and that system is getting stronger and more responsive, and so educating the public on the ways that they can connect to their government through reporting situations that need to be addressed — be it a water leak, pothole, sidewalk repair or whatever. Just making sure that people know the right conduit. And then as the elected official for all of the constituents in District 5, I serve as that advocate, that intermediary, to assist them with the service delivery, with their questions around the government in general.

A: We’ve got to grapple with affordable housing and the collateral issues related to that. We’ve got to have Atlanta be a place where everybody can not only live but can stay. I’m very happy that with our issuance of the housing opportunity bond, we’re going to be able to allocate a portion, $5 million to $7 million, to allow people to stay in their homes. So if you’re elderly and you have home repairs and taxes and everything falling on you, and rather than make the decision ‘I have to sell and leave,’ this fund will allow for people to be able to manage to stay in place.

And so I think the issues around affordable housing, we can’t deny that it is a pressing problem. We also, as a corollary to that, transportation, is another big-ticket item. So having connectivity so that people can get to and from places of employment, service delivery, things that they need to operate, their family and their homes, making sure that people can in a cost-efficient and time-efficient manner access transportation. So I think affordability and transportation are two things that we’ve got to tackle and correct our course and make sure that Atlanta its he smart city and the progressive city that we deserve to have.

Q: What’s something this Council has gotten right over the last four to eight years?

A: We didn’t raise any taxes and we did not increase our water and sewer rates. And so that was monumental. And at the same time we were able to, we have somewhat approaching $200 million in reserves. So our fiscal house is definitely in order and we’ve been navigating in a way that has been very, very cost-effective, fiscally responsible. That’s something i think we can be very very proud of.

Q: What’s something this outgoing Council has either gotten wrong or failed to do?

A: Being an armchair quarterback is easy. Not to be redundant, but I think in the affordable housing space, I think we could’ve been more aggressive and more knowledgeable. I think we’re beginning to appreciate some of the tools in the affordable housing space and I’m glad that we’re going to be fast learners and I just wish that we had done more in that space more quickly.

A: I am an experienced person, I have been, I have had the honor of being elected by he citizens of Council District 5 for four consecutive terms. I’ve been called a daughter of the district. I not only was raised there, I have raised my daughter there and the law practice that I have has been located in the Council district that I represent for over 25 years. And so I am familiar with the people, the needs, the concerns. I am not only knowledgeable about the district, I’m also knowledgable about City Hall. This is a job that is sophisticated, you need to be sensitive to the neighborhood concerns but you have to be able to navigate in this bureaucratic maze. I have not only a law degree but also a master’s degree in public administration and so I am uniquely qualified and I have a track record of being very responsive and a very committed public servant.

Previous Article
‘The Battle of Sexes’ explores Billie Jean King’s challenges – on and off the court
Next Article
Atlanta City Council candidate Q and A: Liliana Bakhtiari