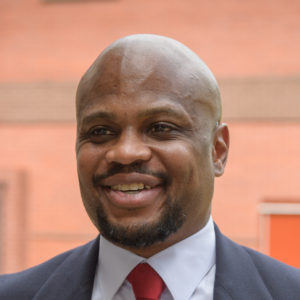 Some comments have been condensed or lightly edited for brevity or clarity.

Q: What is your No. 1 concern for your district specifically (as opposed to the city as a whole?)

Q: The next question is a follow-up, what can you do as a Council person about that, what are some of your ideas or proposals?

A: So, my first issue is … is to reverse the cycle of poverty.

…We have absentee representation in our City Council seat. I’m not going to use the City Council seat as a stepping stone to run for mayor or anything else. But I’m going to use it to serve, taking my 20 years of experience, both in the Georgia House [as staff] and as a volunteer in the mayor’s office, back under Shirley Campbell and Bill Franklin, to make sure that our district is represented at City Hall.

… We’ve got to develop, very, very strong economic development. Inclusionary zoning is at the top of my platform. Affordable housing. Making sure that our families and our children are safe … Making sure we bring all of our resources to the table so we can do the work in our community.

Q: Turning to Council, what’s an uncomfortable truth the next Council will need to face?

A lot of what Atlanta has fought for, foot soldiers, Civil Rights icons like Dr. Joseph Lowery (who is my god-uncle, who endorsed me early in the campaign) … a lot of that we see coming to the fore. We see a very polarized city. Income inequity, all of that. …Class economics are dividing people and it’s almost drawing these very real lines of demarcation in the sand. Where cost of living may be higher in this part of town, we see demographics and all of that in play.

We are going to have to rise up to the occasion, to be the city, essentially to be a city that is too busy to hate. We’ve got to step up to be that. I think we set a high bar where that theme is concerned. Now we’re going to have to fight to be it.

… At one of the forums, the question was asked how we feel about the reality of Atlanta being the ‘tale of two cities.’ Our challenge is going to have to be one city that’s going to benefit every resident of it.

Q: Over the last four to eight years, what is something that this Council has gotten right? … The next question is what they got wrong, so heads up.

A: … This one is a two-edged sword. One thing that the City Council as a whole has gotten right and gotten wrong is …  look at development. We look at Mercedes-Benz Stadium, look at Turner Field and the sale of it to Georgia State University, you look at development that is going on throughout the city … even at the airport. You look at how … Atlanta has been able to attract new forms of revenue, from inside of our country and outside. We all know that Atlanta is probably the largest economic engine in the southeast, using the airport and even the port authority as methods of “irrigation” for our revenue.

We’re building all these new buildings, and we’re seemingly building something in the city every other week or so.

So as a whole that’s great.

But then, the second part — what have we gotten wrong? It’s that we have not been responsible in including our poor and middle class workers in that master plan of development.

We have been successful in development, but we have done a poor job in including the poor and middle class in our master plan.

… There’s an ugly word that’s been thrown around for years, “gentrification.” We’ve seen aggressive gentrification, we’ve seen it. Turner Field, the Turner Field Community Benefits Coalition, they were trying to fight to get a community benefits agreement. So my thing is: we see the city of Atlanta has been very … class-insensitive.

We’ve been willing to invite the “haves” to occupy inside 285 and Downtown primarily. But we haven’t included everybody else … while the thrust has been to occupy Downtown and get Downtown and make it the place to live and work and play, but we’ve developed regular, average people out of the locale.

I’ve gotten the endorsement of Dr. Lowery, I used to be his driver a long time ago. We’ve got IBPO [the International Brotherhood of Police Officers]. We’ve got the Georgia Federation of Teachers. We’ve got PACE, the Professional Association of City Employees. … We’ve got [founding former president of the Atlanta Neighborhood Development Partnership] Hattie Dorsey.