New developments are to pay impact fees to help fund construction of the public amenities needed to manage the growth. This structure is being raised near the intersection of Northside Drive and Marietta Street. Credit: David Pendered

The Atlanta City Council seems intent to raise in 2020 the one-time impact fees charged to new developments to raise money to provide the public parks, roads, police precincts and fire stations that serve growth. Frustration mounts as Mayor Keisha Lance Bottoms’ administration has little to show for progress since Jan. 7. 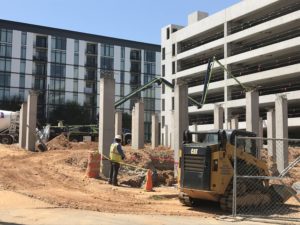 New developments are to pay impact fees to help fund construction of the public amenities needed to accommodate the growth. This structure is being raised near the intersection of Northside Drive and Marietta Street. Credit: David Pendered

The upshot of a flurry of debate last week, between council members and city staffers, is that the council in early 2020 is to convene a series of meetings to devise and possibly enact a measure that likely will raise impact fees. The goal is to have the fee structure in place for use in developing the budget for the fiscal year that begins July 1, 2020. Budget deliberations typically begin in March.

Impact fees have come under the council’s renewed scrutiny as a $410 million gap emerged in two other funding sources – sales tax revenues for Renew Atlanta and transportation. The impact fee fund emerged as a potential source of money to pay for brick and mortar construction of facilities that provide services Atlanta residents see every day – recreation, mobility, public safety.

Of note, the city’s website is not operational on the page that once described the status of projects funded by sales taxes levied for Renew Atlanta and transportation improvements. The page over the weekend had this headline: “New Website Coming Soon.”

On Jan. 7, the city council voted unanimously to adopt a measure that was intended to jumpstart a citizens’ review panel. The Development Impact Fee Advisory Committee is established in the city code to review the city’s impact fees and the mayor is to provide adequate staff and resources for the committee to do its work. The resulting recommendation is expected to suggest the first fee increase since 1993 or 1994.

Committee Chairman Dustin Hillis provided perspective on the arc of time since 1994.

“I was in fourth grade,” Hillis said.

Hillis chairs the council’s Public Safety and Legal Affairs Committee. The committee called for city officials to appear at its Oct. 29 meeting to discuss key aspects of the city’s impact fee fund: 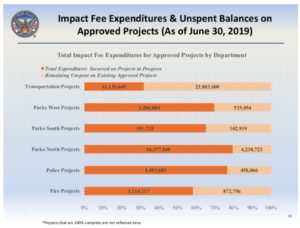 Only a portion of impact fees collected since 1994 have been spent on the purposes for which they were collected: Mobility, parks, and police and fire projects. Credit: Atlanta

Details of the fund were presented by Roosevelt Council, Jr., the city’s CFO. The CFO position reports to the mayor and council. He reported:

The report speaks of fees that were collected. It does not appear to address whether any fees were imposed but not collected.

One of Council’s responses to a question from Hillis highlighted the space occupied by impact fees in the city’s budget. The fees are managed by City Planning; they are administered by the Finance Department; and various departments actually spend the proceeds and oversee the work.

To Hillis’ question about the money that’s not been spent, “What’s the end game here?,” the CFO responded:

Sidifall said the citizens committee the council addressed in January was established in June. In August, the first meeting was spent getting organized, she said. The second, in September, was spent electing a presiding officer. The third meeting included a presentation from Duncan and Assoc., a consulting firm that conducted the previous impact fee reviews.

The city paid a one-time fee to Duncan to present its past work and methodology to the committee, Sidifall said.

Councilmember Howard Shook, who chairs the Finance Committee, said the evaluation process is taking far too long and never was intended to supplant the council’s purview. He said his expectation was for any new fee structure to be in place for the FY 2021 budget process, which begins in March.

Shook addressed this comment to Sidifall during the discussion in the Public Safety Committee: