The current Atlanta City Council districts, which soon must be redrawn based on new U.S. Census data. (Map by Maggie Lee/Atlanta Civic Circle.)

This year’s Atlanta City Council redistricting will bring significant changes in representation for some neighborhoods, with a general trend of southside districts expanding and northside ones shrinking.

The council’s 12 local districts must be redrawn to have roughly equal populations following the new 2020 U.S. Census data. That will mean changes for a council that just elected new members late last year. District 9 City Councilmember Dustin Hillis is leading the drawing of alternative districts after having fun experimenting with mapping software over the past year. 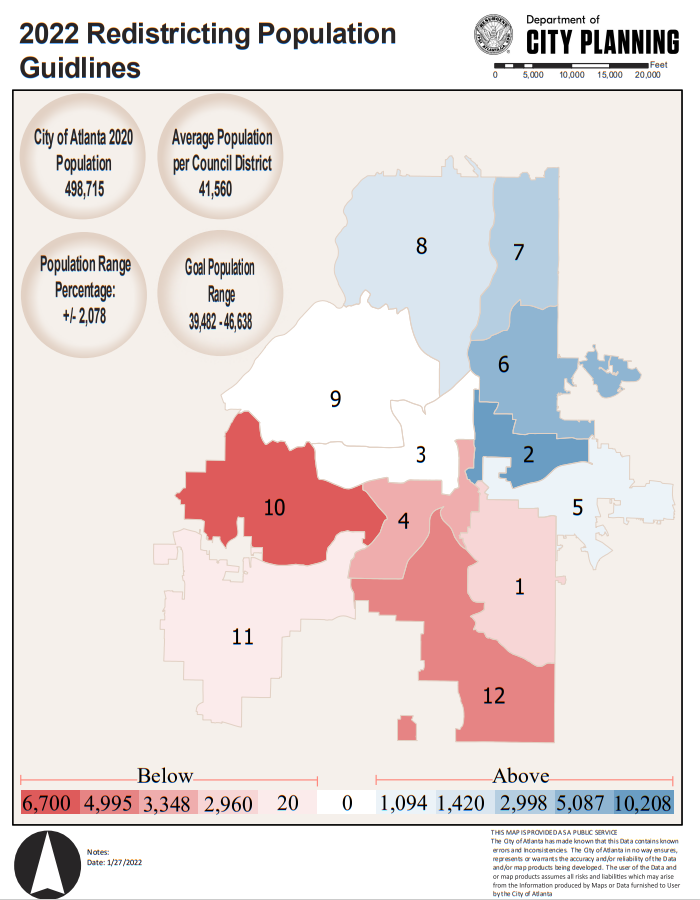 A Department of City Planning map showing the degree to which the existing Atlanta City Council districts are out of balance in terms of roughly equal population.

“Some will have big changes,” says Hillis. He says the most extreme changes are coming to Councilmember Andrea Boone’s District 10, which lost about 9,000 people and thus must expand, and Councilmember Amir Farokhi’s District 2, which gained about 11,000 and must shrink.

Hillis’s own Northwest Atlanta district is likely to expand northward into part of Buckhead now represented by Mary Norwood’s District 8.

The council’s Committee on Council will handle the redistricting and is working to formalize a timeline of public hearings and legal reviews, with the goal of finishing by year’s end. The districts must be ready for the next election in 2025.

With Buckhead cityhood off the table this year, so is a far more radical redistricting that would have been required. Cityhood would have nullified all or some of the four council districts that represent the neighborhood, forcing extreme changes to districts in what would have been left of Atlanta.

See below for an interactive map of the current City Council districts.