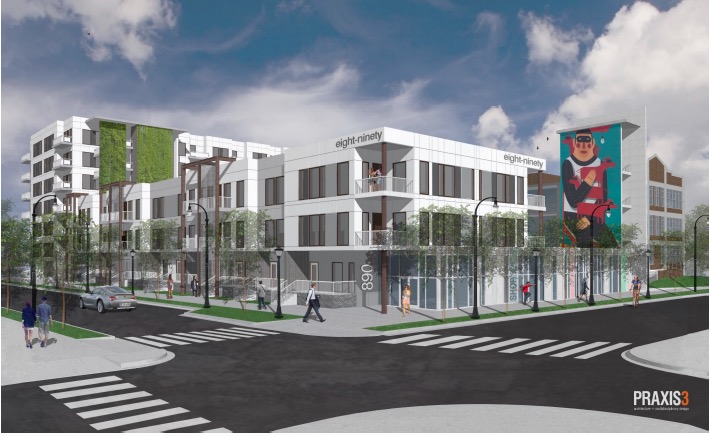 A Praxis3 sketch of an affordable housing development planned for Memorial Drive steps from the BeltLine. Credit: Via Atlanta Housing handout

A new complex of below-market-rate housing may start rising on the eastside BeltLine as early as this summer.

“Madison Reynoldstown” is planned as 116 apartments set aside and priced so that folks making a good bit less than metro Atlanta’s median income could afford to live there: for example, a family of four earning about $45,000 per year. So, for one example, that would mean rent of about $1,000 per month for a three-bedroom apartment on a Memorial Drive block that’s between Chester Avenue and the BeltLine. 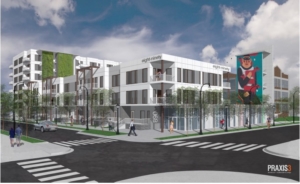 A Praxis3 sketch of an affordable housing development planned for Memorial Drive steps from the BeltLine. Credit: Atlanta Housing handout

Atlanta’s housing authority would be a part-owner of the complex, help finance it and subsidize some rents for an initial 15-year term, in a deal approved by the agency’s board on Jan. 30.

It’s the second phase of development on the block. The BeltLine announced early details on the development in 2017 and is also set to subsidize the development via a grant of $2 million, according to Atlanta Housing documents.

Proposed rents are lower by hundreds of dollars than new, private buildings on that stretch of Memorial Drive, according to the housing authority.

And it’s also many more apartments at lower prices than city law requires for new-building affordability in a special zone around the BeltLine.

And that’s a little bit deeper affordability than some publicly subsidized apartments, deals which sometimes come from agencies like Invest Atlanta, the Development Authority of Fulton County or the BeltLine.

But still, the proposed rents at 890 Memorial got mixed reviews from the board of Atlanta Housing, an agency that’s usually focused on housing people at the very bottom of the income ladder, focused there in a way that other agencies aren’t.

Brandon Riddick-Seals, the interim president and CEO of the housing authority, presented the deal to the board. He’s often called for more construction of affordable housing, and did so again at the meeting.

Atlanta’s a prosperous city, he said, and in a place like this, with more people moving in, affordable housing is like a game of musical chairs.

And 890 Memorial Drive is essentially one of those chairs.

“Our subsidy alone and the number of projects like this one is not enough,” he said. “It has to be more. We’re going to push as hard as we can to try to drive our construction and development costs down by working with our partners by identifying add sources of funds.”

But Atlanta Housing Board member James Allen voted against it.

“Some of my best friends are sanitation workers. We need something that they can afford also,” Allen said, just before the vote.

Board chairman Christopher Edwards voted for it, saying he believes it’s the best that can be done under state and federal regulations that govern tax credits.

But he suggested a bigger role for the board too.

“The point of the board is not to just look at this detail as it is, but to also cry out and say, ‘Hey, if we can’t do anything about it as Atlanta Housing [or the city] because of certain rules or barriers … then we need to change the rules and barriers.'”

And he also asked the authority staff on hand at the meeting to dig deeper.

Last year, the BeltLine selected as a development partner for the site Rea Ventures Group, a developer with experience in affordable housing. There’s also a loan coming from the Enterprise Community Loan Fund, a nonprofit that itself works for affordable housing with nonprofit and mission-driven developers.

This is the first transaction that brings together the two public agencies — the BeltLine and Atlanta Housing — plus a private partner in the form of Rea, involving a property on the multiuse trail, according to the BeltLine.

The collaboration among those three plus the financial partners is set to assure affordability in some form, even after the initial 15-year rent subsidies, for 50 or more years.

Formal approval of the BeltLine’s part of the funding is scheduled for a meeting of Invest Atlanta’s board on Feb. 21.

If all goes to plan, closing on the deal could happen as soon as this summer, with construction to start about a month later, according to BeltLine documents.

This story has been updated with additional details from the BeltLine.