Atlanta is taking steps to protect the historic integrity of a property best known as Pullman Yard. It’s a collection of 11 commercial buildings located on the largest single tract of land in the rapidly redeveloping Kirkwood neighborhood, east of Little Five Points. 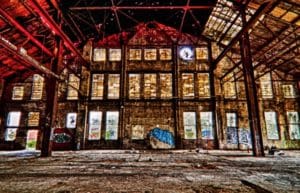 Atlanta’s Urban Design Commission may designate Pullman Yard as an historic landmark and site, which would increase the city’s ability to control any redevelopment on the 27-acre site where the oldest buildings date to 1915. Credit: pinterest.com

There’s no indication the 26.8-acre site is currently in play.

The state owns the property. It’s a rectangle of land at 225 Rogers St. that abuts the east side of Rogers Street and, to the north, abuts the CSX tracks that flank DeKalb Avenue. DeKalb County’s tax commissioner has set its value at $7.4 million.

The site is not listed as being for sale by the State Properties Commission, which buys and sells land on behalf of Georgia. The property was not discussed at the only meeting of the SPC board held this year, on June 23, according to minutes of the meeting.

The site has been the subject of several redevelopment efforts since the state bought it in 1990 for almost $1.7 million, according to DeKalb County tax records. 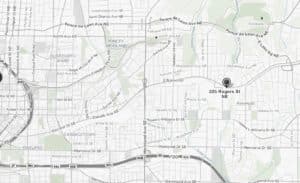 Georgia purchased Pullman Yard in 1990 to service an excursion train it shuttered in 1993 to cut expenses. Credit: mapquest.com

The latest effort unfolded in 2015, when a group floated plans to build indoor and outdoor sports facilities, according to a report in atlanta.curbed.com.

For example, if an owner wants to demolish a building and the UDC thinks it should be preserved, the UDC could recommend to the mayor that the city buy the property or acquire it through eminent domain. The recommendation is not binding on the mayor, according to the city code. 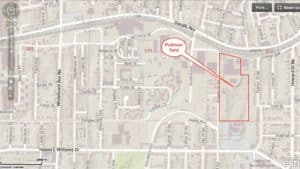 Pullman Yard is located in Atlanta in DeKalb County, an area that is being redeveloped rapidly with homes and shops. Credit: DeKalb County, David Pendered

Further, the owner can appeal any ruling by the UDC to Fulton County Superior Court, according to the city code. An applicant could appeal a ruling from this court to a higher court.

In the case of the Pullman Yard, the nomination for landmark status was initiated by Doug Young, the UDC’s executive director. Young did not return a phone call Monday.

The UDC staff has yet to post its recommendation on the nomination.

In many cases, by this point in time the staff would have provided its analysis of a proposal to build on or alter a site. The analysis would list relevant city codes, advise of comments from neighbors, analyze the information, and recommend the application be approved, denied, or deferred to allow further negotiations.

DeKalb’s tax records show the property has 11 commercial buildings. Ten are warehouses and one is an office building. Here are the details:

The warehouses built in 1915 of brick and concrete block range in quality from average plus to poor, according to DeKalb County tax records. Credit: pinterest.com