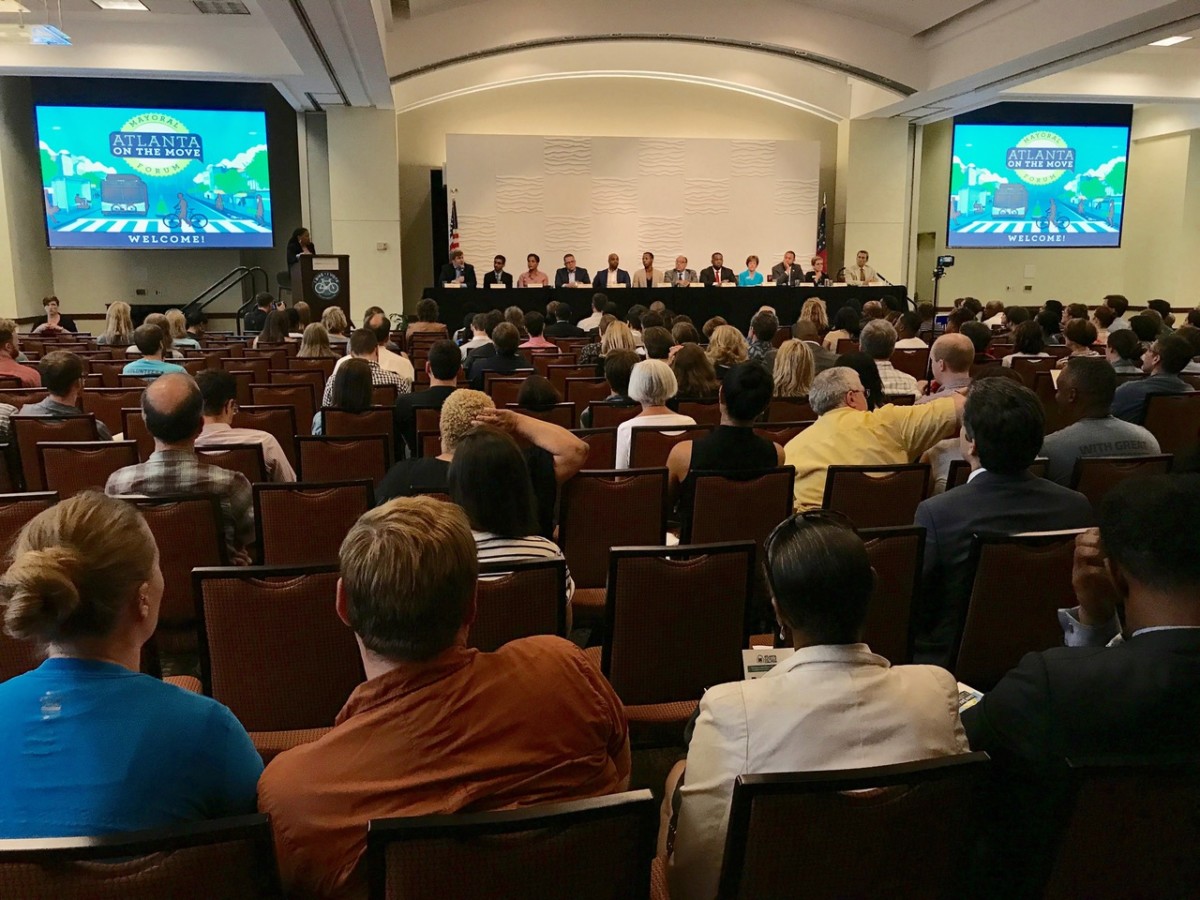 Last year, Atlanta voters approved new sales taxes to pay for transportation and transit builds. This year, mayoral candidates are talking about what they would do in a city that’s raising cash, is predicting a lot of new residents and that aims to attract big employers.

With a view of the bike valet in the parking lot, 12 Atlanta mayoral candidates met in front of a few hundred folks Downtown in a meeting room at the Loudermilk Conference Center for a Tuesday evening forum organized by the Atlanta Bicycle Coalition in partnership with a dozen mostly environmental or transit advocacy groups.

For the record, the candidates made a unanimous commitment: 100 miles of bikeways in the first term. 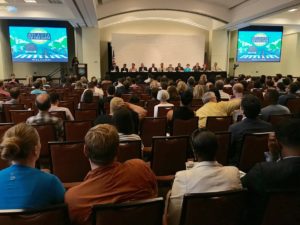 Most of them also said that the city should take responsibility for sidewalk repair. Right now, the city will pay for high-priority repairs if there’s money budgeted for it; but when the cash runs out, responsibility reverts to the property owner. And plenty of sidewalks in Atlanta are in rotten shape. Michael Sterling, the former executive director of the Atlanta Workforce Development Authority, stood out for balking at a city takeover, saying he thought it may carry too much liability.

So Sterling subsequently hassled his fellow candidates a bit when they talked about fixing sidewalks with public money but balked at pledging to spend $20 million a year on it. But without identifying some funds, and given other budget needs, candidates were tepid about any such promise.

The candidates broadly agreed that right now that’s not so cheap, easy or fast for everyone to get where they need to go. And broadly, that the solution includes all kinds of modes of transportation, like mass transit, bikes and walking.

In answer to a question about the biggest obstacle on the road to good transportation and transit, the candidates laid out what’s on the road between here and there. Some of their thoughts are given here in no particular order:

Atlanta City Councilwoman Keisha Lance Bottoms said that the biggest issue right now is connectivity, and its relative, funding. “Connectivity relates to … our sidewalks and our walking trails; but also as we think about our underserved communities and the ability of people even to get to work, we have to make sure that as we extend our transit lines that we are extending them into the communities that sorely need them,” said Lance Bottoms, adding that as a Council member, she has pushed for light rail extension into southwest Atlanta. She also said MARTA hours are too short for some peoples’ work schedules.

City Councilman Kwanza Hall said he would roll out a new department of transportation and hire a czar to work on figuring out how to move people around. “There are probably a top 100 pain points of congestion that we’re going to identify through a crowdsourced solution and then take those and knock them down one by one,” said Hall. He also said he wants to see the streetcar get linked to the BeltLine, see more rapid buses on major roads, see circulator buses on smaller roads and a multimodal transit station where folks can catch trains to Savannah, Athens and Chattanooga.

Laban King, a real estate investor, said he’s lived in cities without good transit, like Detroit, and with good transit, like an enjoyable New York City. King said he doesn’t pretend to have all the answers but that he promised to work with everyone in the room to find solutions. Also on bike lanes specifically, King had a bit of a caveat: “To the black community a bike lane is symbol of gentrification that’s about to come.” He said the city needs to think about those symbols and work to ensure that longtime residents don’t have to worry about losing their homes.

Cathy Woolard, a former president of Atlanta City Council, is a bike rider herself and has worked as a lobbyist for bicycle advocates. She said she’s long thought MARTA should be expanded and that there should be transit on the BeltLine. “What I want to do next, is lay down five lines of transit simultaneously that are integrated and connect to MARTA all across the city: The BeltLine, extend the streetcar across the city, North Avenue, Joseph Boone [Boulevard] and Northside Drive,” she said. Woolard said she also wants to see distance-based fares on MARTA.

John Eaves said what’s needed is a regional approach. The former chairman of the Fulton County Commission said millions of cars come in and out of the city daily as folks pass through and commutes take people over city lines. He said city transit needs to be connected to what’s happening outside city lines. And, “we need to have a regional transit plan that expands MARTA from Five Points MARTA station downtown to the outer extremities of the five-county region,” he said.

Michael Sterling said he wants to start a city infrastructure investment bank or fund and do more public-private partnerships — in search of money. “We’ve seen our city and our region study, there are so many tremendous plans out there … We’ve seen plans become nothing more than academic exercises because we just simply haven’t had the funding to execute some of the greatest ideas,” said Sterling.

For Vincent Fort, who recently left the state Senate, the key issue for the city is income inequality. “When I look at transportation policy or any other policy for that matter,” said Fort, “I’m going to ask this question: ‘What can be done on this issue which will mitigate, reduce income inequality and income immobility?’” Fort said MARTA rail should be expanded to Fulton Industrial Boulevard. He also reiterated charges that Emory is attempting to “break in line” by asking to annex into the city just at the moment there is a proposal for a big MARTA expansion through campus. If Emory were part of the city, Atlanta sales taxes would help fund any build that gets green-lighted.

City Councilwoman Mary Norwood said that with the transit and transportation money that voters have approved for the coming years, Atlanta has a “once in a century” opportunity to get transportation right. “We need the next CEO of the city watching every one of these projects, making sure that they are designed right, they are procured right, they are constructed right, they are executed right to give us the most mobility we can possibly have,” said Norwood. She also declared that she’s an independent, and therefore could build relationships on both sides of the aisle with folks in the state and federal government that could lead to transportation or transit funding.

Candidate Glenn Wrightson said riding a bicycle should not be a health hazard. “We don’t have the legacy systems in place, the subway systems in place other cities do … we need to expand the other modes of transportation,” said Wrightson. He said single most important issue is not to have fragmented planning. He also called for a city ban on plastic bags and limits on gas-powered leaf blowers.

City Council President Ceasar Mitchell said his biggest priority would be reducing congestion. He wants what he’s called “doorstep to destination” solutions. “As mayor, the first thing I’m going to do is make sure that all of our various transit options are all synced and connected, you can use one card or your smartphone to access it, whether its your bicycle, whether it’s a bus, whether it’s a train or whether it’s even using ride-share,” said Mitchell. He also wants to synchronize streetlights quickly and pledged to “lock arms” with MARTA to fight for state funding for transit.

Rohit Ammanamanchi, who’s recently graduated Georgia Tech in civil engineering, said that city streets are reaching capacity and that “you can feel rush hour traffic on a Saturday afternoon.” He said it’s critical to start to build infrastructure for other modes of transportation. “We have to be completely flexible about our land use and our ability build bike infrastructure that’s totally separated from roadway infrastructure so that people will actually use it,” he said, adding that the city needs to repair sidewalks and synchronize traffic lights for transit.

Peter Aman, a former Atlanta COO who spent most of his career as a consultant at Bain and Company, said that Atlanta is suffering because of the lack of mobility. “The top priority is figuring out how to get people out of cars onto transit so that everyone has a better option for them,” said Aman. He said when he lived in San Francisco, he used to take buses daily on a route where they showed up every four minutes. Aman said the next mayor must work with MARTA to work toward things like central control of traffic lights to prioritize buses, building pullouts where buses can stop for riders, and sending buses more frequently.

A video of the forum is on the Atlanta Bicycle Coalition Facebook page.