Atlanta is moving forward with a $1 million environmental analysis of a proposed route of the Atlanta Streetcar that would run 2.5 miles from Centennial Olympic Park west to the Atlanta BeltLine’s Westside Trail.

The proposed route is projected to spark economic development and provide an alternate mode of transportation, according to a fact sheet provided by Invest Atlanta, the city’s development arm.

The route is part of a $3.7 billion BeltLine/Streetcar expansion plan that that was outlined in June 2015 on the BeltLine’s website. The costs have since been deleted from the webpage.

This segment is forecast to create 1,800 construction jobs. Once the segment is completed, it is to spur creation of 2,000 permanent jobs, according to the fact sheet.

Atlanta doesn’t have money to build the project. However, by completing an environmental assessment, Atlanta will position the project to be eligible for, “major federal funding opportunities,” according to the fact sheet.

The analysis is to begin this month and be complete in December.

Atlanta didn’t have a project to apply for in this year’s federal Tiger discretionary grant, which had a deadline of April 29. This year, $500 million was made available for projects. The criteria sound like a perfect fit for the streetcar: 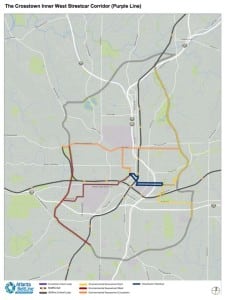 The proposed Purple Line would extend from Centennial Olympic Park the the Atlanta BeltLine’s Westside Trail. See link in the story to the IA report, which has a bigger version of this map. Credit: Invest Atlanta

Last year, Atlanta applied for a $29.3 million grant to extend the streetcar east to the Irwin Street entrance to the BeltLine. Total cost of the 1.8 mile segment was forecast at $65.4 million. Atlanta did not win a grant.

Atlanta, in consultation with the regional office of the Federal Transit Administration, reached a mutual agreement that this is, “a cost effective and logical approach,” according to the fact sheet.

The city is to provide $650,000 from the Westside Tax Allocation District, according to the resolution approved by the Invest Atlanta board. The TAD is funded with property taxes collected on developments built since the creation of the Westside TAD in 1998.

The money is to pay for consultant design engineering to support environmental documentation.

The board that oversees Invest Atlanta approved the spending at its April 21 meeting. Atlanta Mayor Kasim Reed chairs the board.

The Atlanta Regional Commission is to provide $365,625 to pay consultants for federal planning and environmental documentation.

Once this environmental analysis is complete, Atlanta will have the documentation necessary to seeking funding for a streetcar route that would cover 7 miles in Downtown Atlanta and adjoining neighborhoods:

The streetcar that was built with federal funding extends 2.7 miles, from Centennial Olympic Park to the Martin Luther King Jr. National Historic Site. Atlanta received a Tiger grant in the amount of $47 million to help pay for the $98 million project.

The 1.8-mile Irwin Street extension was forecast to cost $65.4 million. Atlanta didn’t win a $29.3 million grant that was to help offset costs.