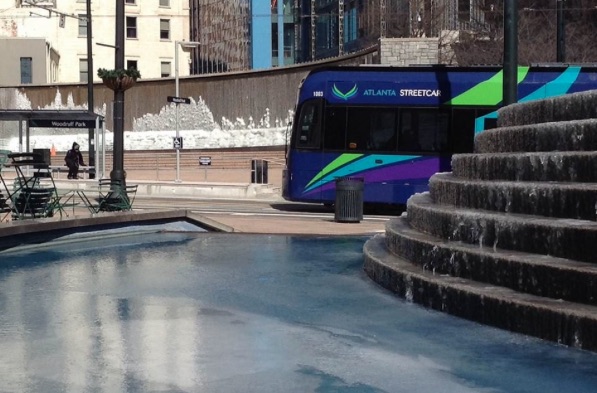 The Atlanta Streetcar will be free to ride through 2015 because there is no economical way to collect a fare. That’s because MARTA’s Breeze card technology isn’t feasible to use, Atlanta’s commissioner of the Public Works Department said Wednesday. 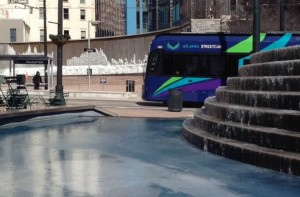 The Atlanta Streetcar will be free to ride this year because that’s cheaper than installing and using MARTA’s Breeze card technology, according to Atlanta’s public works commissioner. File/ Credit: facebook.com/AtlantaStreetcar

Mayor Kasim Reed said last month, at the annual meeting of Central Atlanta Progress, he had decided to waive the fare for the rest of 2015 after learning during a trip to Israel of new types of fare collection technology.

Public Works Commissioner Richard Mendoza told the Atlanta City Council’s Transportation Committee Wednesday morning that Atlanta and MARTA need at least through the end of the year to review and choose technology to collect fares.

“One of the drawbacks of the current technology is the background software support, to extend to the streetcar, offsets all the revenue we get from the $1 fare,” Mendoza said. “We have to come up with a lot better fee technology.”

Another problem is that customers aren’t likely to make the effort that’s required to get the Breeze card to function on the Streetcar, Mendoza said.

“MARTA is looking at the current technology, it’s antiquated,” Commissioner Richard Mendoza said. “”It order to utilize that, the passengers are having to go through a 10- to 11-step process and, frankly, folks aren’t going to go through that cumbersome a process to access the fare and utilize the Streetcar.”

Mendoza said the city and MARTA have been working for six months on the issue of fare collection technology. In the past 45 days, the city determined that the Breeze card is not appropriate for the Streetcar.

Mendoza also said the cost of the Streetcar is tracking $870,000 below budget because service started later than expected. Consequently, the lost of the projected fare box revenue won’t cause cost overruns.

“Due to offsets due to late starts, we’re actually trending $870,000 under the proposed budget for this year,” Mendoza said. “Those costs [lost fare collections] will be absorbed in the current operational budget without any impact further down the road.”

Katrina Taylor Parks, Reed’s deputy chief of staff, said the administration made a deliberate decision to waive fares when officials discovered the depth of the technological issue.

“MARTA had the hardware under their purview and that item was not ready,” Taylor Parks said. “It’s not just the Breeze card, but machines to go with the Breeze card. It was not a random decision. It is totally based on the current circumstances.”

Transportation Committee Chairperson Felicia Moore and Councilmember Alex Wan expressed dismay that the administration had not notified the council of the problem.

“There was not an announcement that there was an issue,” Moore said.

“When I ask you to give a report, that’s a good time for you to give us information,” Moore said. “If you had told us about this awhile back … at least we could have said we had heard about it.”

Mendoza responded that he had not notified the Transportation Committee of the issue. He reiterated that the department had been working to resolve the problem, though attention was focused on getting the Streetcar up and running.

“That disappoints me,” Wan said. “It’s not like the Streetcar was a surprise we got on Christmas day from Santa.”