The task of retooling the 10th Street Bridge into a multi-modal route over the Downtown Connector is taking an important step forward. The process of acquiring land for the project is beginning. 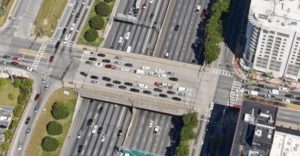 The 10th Street Bridge in Atlanta is to be retooled into a multi-modal route ove the Downtown Connector. Atlanta is starting the process of acquiring land for the construction process. Credit: Midtown Alliance

The Atlanta City Council is considering a proposal to authorize city officials to acquire rights of way necessary for construction. No opposition to the paper is expected. Final passage of the enabling legislation could occur as early as the council’s meeting May 17.

The bridge is to open in mid 2024. Construction is set to begin in 2023, according to the schedule posted by Midtown Alliance. 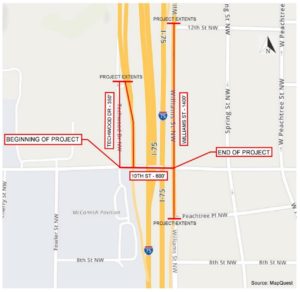 This project map shows the extent of work required to retool the 10th Street Bridge into a multi-modal route. Credit: Atlanta

Midtown Alliance has taken a leadership role in this project, as it did at the 14th Street Bridge over the I-75/I-85 roadway known as the Downtown Connector.

At the 14th Street Bridge, the state’s original plan called for a structure with travel lanes separated by a turn lane. Midtown Alliance became involved and the final result is the multi-modal bridge that exists today.

The 10th Street Bridge is the type of bridge once envisioned at 14th Street. The existing 10th Street Bridge has three travel lanes in each direction, separated by a turn lane. A utilitarian barricade fence on each side is to prevent projectiles from being lobbed onto the highway below.

To remake the 10th Street Bridge, Midtown Alliance hired an engineering firm to design a multi-modal remake. Kimley-Horn is to design a bridge that addresses the aspirations of folks who offered comments during a series of stakeholder meetings. This comment is representative: 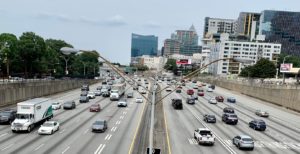 Once the 10th Street Bridge is retooled into a multi-modal route, the Downtown Connector will be spanned by four pedestrian-oriented crossings from 5th Street to 17th Street. Credit: Kelly Jordan

The final design is not intended to replicate the garden-like environment built into the 5th Street bridge. But the retooled 10th Street Bridge is to provide safer mobility for the growing volume of traffic crossing it by means other than a vehicles.

For example, the eastern side of the Connector is being filled in with student housing that can serve a few thousand students, who are walking or riding bicycles, scooters or skateboards across the bridge on their commute between school and home.

Even before this supply of housing was erected, Midtown Alliance was seeking a bridge design that would accommodate individuals walking between campus and MARTA’s Midtown Station. The number rises dramatically during events at Tech’s McCamish Pavilion. At the time, estimates called for the bridge to accommodate more than 35,000 travelers a day, according to the Midtown Alliance.

The budget is set at a total of $7.2 million. Sources include:

‘The Stitch’ seeks to bridge the divide created by the Downtown Connector
Maria Saporta March 4, 2019 4:19 pm