A goal of Atlanta's proposed $100 million housing bond is to help owners restore dwellings before they become uninhabitable. Such funds could be applied in Carey Park, located west of the Mercedes Benz Stadium. Credit: David Pendered

Note to readers: This story was updated Thursday with comments from Atlanta City Councilmember Matt Westmoreland. 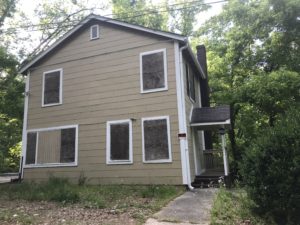 Atlanta City Councilmember Matt Westmoreland said Thursday he intends for the city to repay the bonds, interest and related expenses with little or no use of property taxes or other revenues in the general fund.

Westmoreland is the lead author on the measure and chairs the committee that will review it before the council’s consideration. The first deliberation could occur as early as Aug. 25, in the Community Development and Human Services Commission.

The first $28 million in payments are to come from the $28 million housing trust funds that’s to financed through six annual installments by the developer of the Gulch, according to the legislation. The remainder of the bond repayment is to come from a source, or sources, to be determined, Westmoreland said.

The terms of the bond that travel with the legislation pledge the city’s full taxing authority, on all taxable property, to repay the debt:

Although the legislation states the bonds could have a maturity date of up to 40 years, Westmoreland said he intends the bonds to be repaid within 20 years.

This proposal, introduced Monday, is half the sum the Atlanta City Council was considering four months ago. The mayor in April scuttled the proposal to $200 million in bonds to fund an affordable housing program at time the municipal bond market was collapsing and uncertainty surrounded city revenues.

The market has since recovered and investors are seeking long-term instruments in an era of uncertainty, according to a report this month by Blackstone, a multinational investment management company.

Now returning at the mayor’s original $100 million figure, proceeds of the bonds are to create affordably priced residences, and to maintain existing residences so they don’t become uninhabitable, and to purchase land for development of affordable housing. The program is titled, Building the beloved community housing affordability initiative.

Planned expenditures cited in the legislation include: 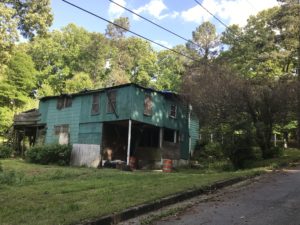 A goal of Atlanta’s proposed $100 million housing bond is to help owners restore dwellings before they become uninhabitable. Such funds could be applied in Carey Park, located west of the Mercedes Benz Stadium. Credit: David Pendered

This proposal would be the city’s third bond sale this century to fund affordable housing. The first, in 2007, was for $35 million. The second, in 2017, was for $63.7 million, which included a sum to refinance the 2007 bond, according to a bond document.

Bond cited the improving bond market in his comments Wednesday in support of the paper:

The financing plan envisions the sale of up to $100 million in taxable revenue bonds. The interest rate is not to exceed 5 percent. Bonds are to mature in no more than 40 years. In practice, governments routinely extend the maturity of bonds by refinancing them during their lifespan.

The history of this legislation began in February. Bottoms’ administration submitted a $100 million proposal. The council doubled the amount, through the action of two committees. The mayor withdrew the proposal in April.