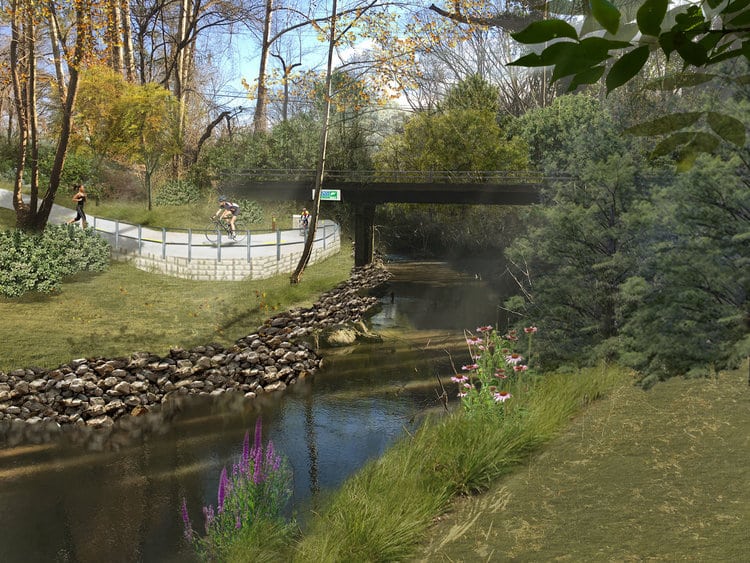 Never have those two words held as much meaning for Atlanta as they do now. The Friday collapse of a section of Interstate 85 – has severed a key transportation artery for the region.

Immediately, and with good reason, there were pleas for us to get serious about regional rail transit – once and for all. A silver lining of this manmade disaster is the probability that transit will gain momentum during this transportation debacle.

But there are other options. 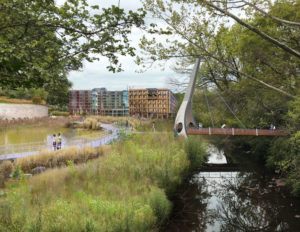 We are creating a regional network of multiuse trails that do double duty. They provide an alternative way for us to get around – whether it be by bicycle, foot, roller blades or skate boards.

And they also create ribbons of greenspace in our region.

Coincidentally, the 2017 Park Pride’s annual Parks & Greenspace Conference on March 27 was themed “Connecting with Parks” – exploring the role trails can play in linking our region’s parks while offering people other ways to get around.

Atlanta is investing in these alternative modes of travel.

In November, City of Atlanta voters passed an additional half-penny sales tax to expand MARTA within the city. It will extend the Atlanta Streetcar a half-mile to the Eastside BeltLine, and several other transit expansions and improvements are on the drawing boards.

And voters also approved a .4 percent sales tax for other transportation investment.

The first project to be funded by the transportation infrastructure sales tax will be $3 million for the first phase of the seven-mile Proctor Creek Greenway, according to Stephanie Stuckey, the city’s director of resiliency. 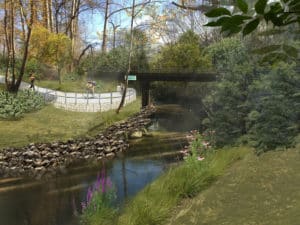 The city is partnering with the PATH Foundation and the Emerald Corridor Foundation to build two new miles of trail that will connect with another mile. The hope is to complete the trail to the Chattahoochee River and continuing it with a bridge over the river.

The first phase of the Proctor Creek Greenway would begin on the western portion of the Atlanta BeltLine at Maddox Park, connect it to the Bankhead MARTA Station and then continue towards Grove Park.

“I see the BeltLine as my Interstate 285,” said Ed McBrayer, founder and executive director of the PATH Foundation, during a Proctor Creek Greenway public forum. “It is about alternative transportation. The fewer cars we have on the road, the better off we are. My trails are a lot cheaper than parking decks and a lot cheaper than widening highways.”

One advantage of building trails versus than trains is speed and cost. Construction on the Proctor Creek Greenway is expected to begin in the next couple of month, and the goal is to open the three-mile trail by the end of the year – while Atlanta Mayor Kasim Reed is still in office. 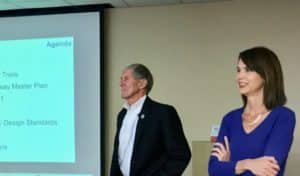 PATH and the partners have been designing a master plan for the entire trail, and McBrayer said the strategy is to make the first phase so appealing that the public will want it to be completed as soon as possible.

Several other trails also are being developed. The Atlanta BeltLine Inc. is building out the Westside Trail from Washington Park to Adair Park. It also is working on the southern extension of the Eastside Trail. Meanwhile, Buckhead is busy building out the PATH 400 trail, and McBrayer has already worked with the Georgia Department of Transportation to weave the trail through the Georgia 400 and Interstate 285 interchange.

Becky Katz, the city’s chief bicycle officer, said it is time to view our streets differently.

“We have 1,600 miles of roadways in our city solely focused on one mode of transportation,” Katz said. “How can Piedmont Avenue feel like Piedmont Park? Let’s transform our roadways into something different. The city is growing and getting more dense. We need to use this right-of-way in a different way. When you walk down Peachtree Street, you should feel like you are in a public place. It’s about connectivity of how trails and green space are tied together.” 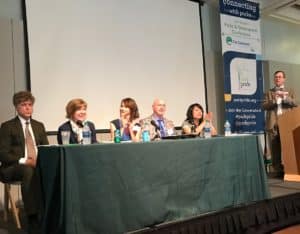 Tim Keane, the city’s planning commissioner, has been shepherding the Atlanta City Design Project, an effort to plan for growth while protecting Atlanta’s natural amenities. Part of that effort will be to plan for how people get around.

“We are a region that’s been spending a generation focused on regional trips and not on local trips,” Keane said. “Atlanta has a bigger challenge than any other city in America. A great street is one where cars are going slow. We will be successful when we don’t need a bike lane because cars are going so slow.”

Meanwhile, McBrayer is busy developing off-road trails – providing an alternative way for people to get around. Over the past 25 years, the PATH Foundation has developed 260 miles of trails, and the organization has great plans for the future.

At the Park Pride conference, McBrayer made his own pledge: “By 2025, we are going to have the most trail connected city in the United States.”

In the meantime, we will maneuver our way around the rupture of Interstate 85 – trying out new ways to get around. 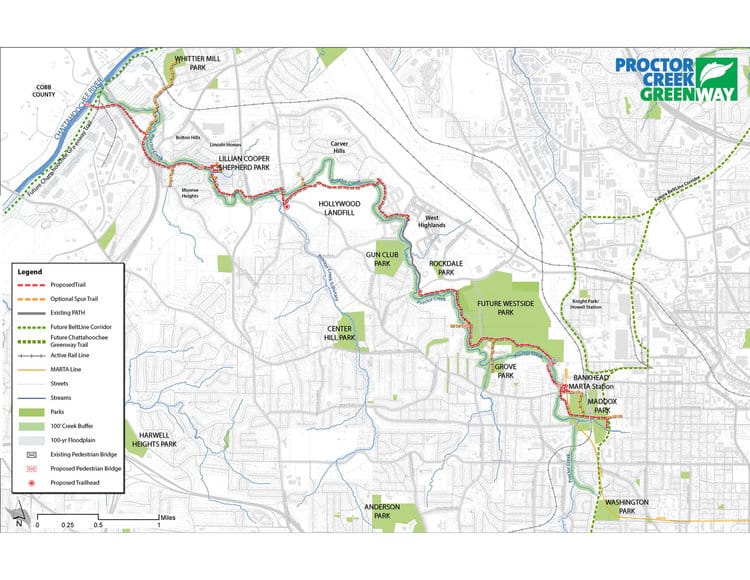 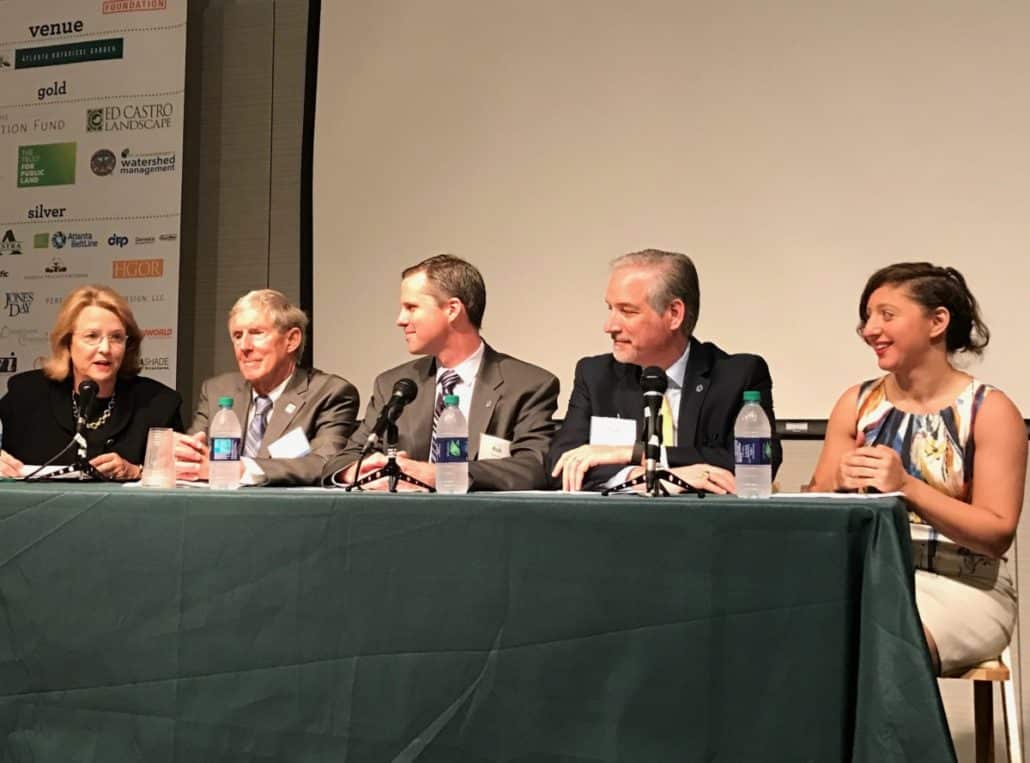