Atlanta’s new cycle track is short, but a milestone in city’s mobility options

Atlanta is poised to complete in August a significant component of its overall plan to provide safer routes for bicyclists. 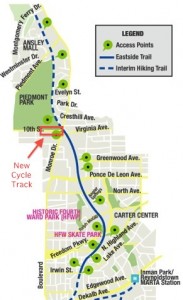 On its face, the new cycle track seems too short to be notable. It will stretch along 10th Street only the width of Henry W. Grady High School, from Monroe Drive to Charles Allen Drive.

This short segment will provide a separate cycle track that will connect tip of the Atlanta BeltLine’s Eastside Trail at Piedmont Park to Charles Allen Drive. Because a bike lane already exists on Charles Allen Drive, the cycle track will provide one of the last links of connectivity for cycling and walking along a route from Inman Park neighborhoods through Midtown and across the Downtown Connector to Tech.

“This is a big step in Atlanta’s history of implementing alternative transportation,” said Heather Alhadeff, who directed the creation of Atlanta’s comprehensive transportation plan, Connect Atlanta, through its adoption in 2008. “We’re slowly getting the pieces in place that will connect the dots.”

A new version of Connect Atlanta was approved without fanfare in June by the Atlanta City Council.

The new cycle track is part of the city’s ambitious plan to double the mileage of bicycle travel lanes and shared paths by 2016. Another aspect of that goal is to double the number of bicyclists.

“We have over $62 million in planned transportation projects that will include the addition of new bicycle facilities over the next three years,” Joshuah Mello, the city’s assistant planning director for transportation said in a statement.

This plan includes 26 new projects that aim to improve safety for bicyclists. Atlanta Mayor Kasim Reed has been a strong supporter of alternative transportation, as well as other campaigns for sustainable practices including the Atlanta Better Buildings Challenge – which promotes water and energy efficiency in commercial buildings. 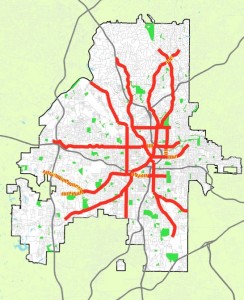 Atlanta’s plan for travel options calls for the creation of core connections that will link major destinations. The routes will be supplemented with a network of secondary connections that reach into neighborhoods. Credit: City of Atlanta

“Riding safety for cyclists continues to be a top priority for my administration,” Reed said in a statement. “Creating new, family-friendly bicycle routes for our citizens and visitors demonstrates our commitment to improving the quality of life for our citizens and creating a sustainable future.”

Another cycle track is slated for construction in downtown Atlanta. A public meeting on that project is scheduled for July 31, from 4 p.m. to 7 p.m., at Peachtree Center Mall.

Plans call for the cycle track to be built on the north side of 10th Street. It will be separated from the vehicular lanes with a marked buffer and plastic posts. Bright green pavements will highlight intersections. Three ramps will connect the cycle track to trails within Piedmont Park and the Eastside Trail.

Cyclists’ safety will be enhanced at the intersection of Charles Allen Drive with a left-turn queue box and a new push-button signal.

Plans call for the short segment of cycle track along 10th Street to be extended, eventually, to Peachtree Street. The next phase is to reach Myrtle Street and that phase is to be scheduled later this year.

The Midtown Alliance is helping to fund the project, which supports the sustainability action plan – Greenprint Midtown – the alliance adopted in 2012.

“We’re pleased to be a part of this project,” Kevin Green, CEO of Midtown Alliance, said in a statement. “The 10th Street cycle track adds to the district’s existing 4.6 miles of bicycle facilities and is part of our effort to bring an additional 10-plus miles of bike paths and streetscapes to Midtown.”