In the sticky months when grass and weeds threaten to overwhelm Atlanta, city parks staffing gets stepped up. But a new report by city auditors suggests a substantial number of park properties could use more work.

And the boss of the city’s Department of Parks and Recreation called those findings “skewed.”

In a survey of 40 park properties citywide, auditors found 15 in poor condition, 10 needed improvement and 15 were in good or excellent condition. 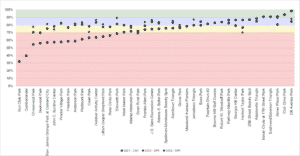 Conditions of 40 Atlanta parks. Blue dots are auditors’ 2017 scores. Green and red dots are parks departments’ scores from 2015 and 2016. Click for larger picture. Graph from city of Atlanta audit report.

“Supervisors attributed poor park conditions to the lack of staff. The department increases parks maintenance staff during mowing season, but staffing during the off-season may not keep up with year-round needs,” the report reads.

Auditors visited the parks between January and March this year. That’s the slow season: when the grass is dormant, when fewer people go to parks. And it’s an optimal time for administrative jobs or vacation.

The parks department fundamentally disagrees with the overall approach — to do the audit during that slow season, wrote parks Commissioner Amy Phuong in her department’s official response to the audit.

“This period is our parks off-season, and as such, the audit presented skewed findings due to limited staffing and maintenance activities being conducted,” Phuong wrote.

“The narrative section of the audit report does not accurately reflect an understanding of our park operations and the seasonal nature of the work conducted by our parks maintenance staff,” she continued.

One thing auditors recommended was to retool the inspection schedule and standards to reflect the different needs at different seasons. The parks department agreed with all the suggestions, according to the report.

Gun Club Park scored the lowest. Auditors got there and inferred that it’s closed. “No signage at the park indicates that it is closed, but it was evident that the park had been abandoned due to the observed overgrowth,” the report reads. 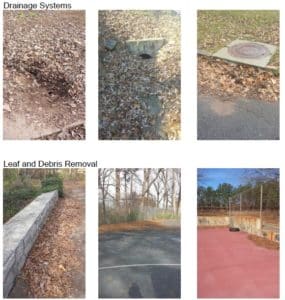 An Atlanta audit found poor maintenance at some parks, such as leaf-clogged drains. Photos from from city of Atlanta audit report.

Auditors observed cleanliness and tree maintenance problems in most parks, according to the report. They found most play surfaces were in good condition, and small parks tended to score higher than large parks. And parks maintained by third parties scored better than those maintained by city crews.

Phuong wrote that not all parks were acquired or developed to be “manicured” parks and that many  were acquired for conservation or to be developed in phases. She wrote that her department takes a fiscally prudent approach and balances priorities and responsibilities against its budget.

The audit also noted that 12 full-time park maintenance jobs were filled after the inspection.