Georgia’s commitment to bus rapid transit operating in express lanes on Ga. 400, north of I-285, has not waned, although the state has suspended the express lane construction project because of costs, according to the state’s express lane administrator. 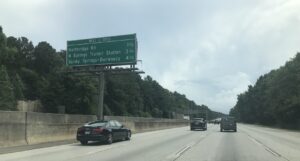 The state Transportation Board suspended the express lane project along Ga. 400 because of excessive costs. (Photo by David Pendered)

“The project scope is not changing,” Tim Matthews, the express lane administrator for the Georgia Department of Transportation, said during Thursday’s meeting of the board of the ATL, the state entity that oversees transit in metro Atlanta.

Progress on of the project has been halted, for at least a month, while GDOT reviews the project’s scope in consultation with the private sector, Matthews said.

The project was scheduled for substantial completion by Aug. 6, 2027, according to a list of milestones in an executive summary. It’s too soon to predict a new schedule, according to Matthews’ presentation.

The state Transportation Board had determined the project had become too expensive, Matthews said. The board opted to reject the remaining proposal, cancel the procurement process, and send the overall project back for review by GDOT planners, Matthews said. 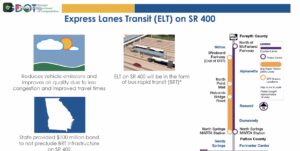 GDOT remains committed to providing BRT with access to express lanes, although the current plan was shelved for cost reasons. (Image by GDOT via ATL livestream)

The scope that’s not to change includes a corridor of express lanes that’s to stretch along Ga. 400 from MARTA’s North Springs Station to a site in Forsyth County located about 0.9 miles north of McFarland Road. Direct BRT access is planned at four points along this stretch of roadway, according to a map of the project.

The next step is to go back to the market and determine other options for building the project, Matthews said. GDOT intends to ask the private sector for its input on how best to move the project forward, Matthews said.

GDOT’s questions will track along the lines of: “’What are you looking for?’ to help us re-procure this project,” Matthews said. “We want to hear from them. All options are on the table.”

The private sector may come forward with a set of recommendations that are new to the project, Matthews said:

A central purpose of the express lanes is to accommodate BRT in a fast-growing region of metro Atlanta. GDOT’s hope is that more commuters will leave their vehicle behind and ride BRT if the buses’ on-time reliability were improved by using the less-congested express lanes. BRT could be operated by MARTA and other transit providers. 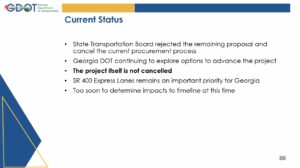 GDOT emphasizes that the project to build express lanes along Ga. 400 is suspended, not abandoned. (Image by GDOT via ATL livestream)

The construction price of this project had been estimated in the range of $1.3 billion as recently as June, when GDOT sought public comment on the current executive summary of the construction project.

Projects priced above $1 billion are beyond the capacity of GDOT to build and finance, Matthews said. Access to private capital is among the reasons Georgia has embraced the concept of partnering with entities that can design, build and finance big road jobs.

GDOT has used the P3 model for at least a decade and announced in June an expansion of the concept. The private partner will be in charge of road maintenance, in exchange for a contract that could extend for 50 years. The pilot project is to be the express lanes to be built in the I-285 corridor. Details are still be assembled.

The concept is to replace the planned one-lane express lane with two-lane express lanes for portions of the I-285 from I-20 to I-85 on the east and I-20 to I-75 on the west. The segment in between these areas already was programmed at two lanes in each direction, according to GDOT.

Previous Article
See signs of voter suppression? Here’s what you can do
Next Article
Living tribute to Black female astronaut, a personal journey that led to its creation