Buckhead is bucking the reported trend of the wealthy fleeing cities to escape the pandemic. That’s the case in at least two situations. 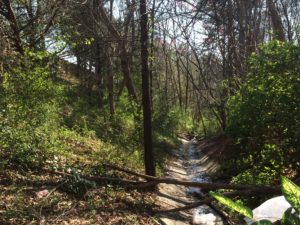 Land in Buckhead that once was viewed as too expensive to develop because of steep terrain has become affordable for residential lots. Credit: David Pendered

Owners of land parcels that measure several acres want to cut them in half in order to have two houses located on the two, now-smaller lots. Two such cases were voted on Tuesday by Neighborhood Planning Unit A, which represents North Buckhead.

The notion of wealthy residents moving from urban areas to the suburbs and beyond became legendary following a May 21 report by bloombergquint.com. Zillow.com refuted the notion in an Aug. 12 report that was cited in an Aug. 17 report by poynter.org.

Some of the lots in Buckhead are large for the simple reason that the land was not affordable to develop in the 1940s. The terrain can be steep, as the topography is typified by ridges and valleys that are common east of the Chattahoochee River. Those barriers are no longer a great obstacle.

One huge controversy involves a proposal to divide a 3.4-acre lot into two lots. A house would be built on the new lot and an existing house would remain on its site, at 3460 Tuxedo Road, in a leafy neighborhood near the Governor’s Mansion. 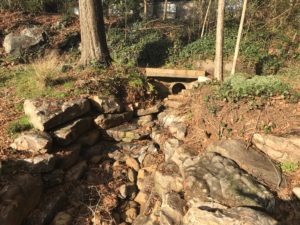 Buckhead is typified by ridge-and-valley terrain that is costly to develop. The South Fork Conservancy installed this erosion control project in Armand Park. Credit: David Pendered

In this case, Atlanta’s Planning Department flip-flopped its position on the proposal after residents opposed it. First, Doug Young, in the city’s Planning Department, determined Jan. 17 that the Tuxedo Park neighborhood doesn’t meet the criteria for protections under any historic designation. Residents protested Young’s determination, presented their case, and Young reversed his decision on Feb. 14, according to the case file posted NPU-A’s agenda. Young’s subsequent decision meant Tuxedo Park did meet the criteria for considerations under the city’s historic preservation provisions.

Based on the ruling in February, a city official on Aug. 24 denied the request to subdivide, according to the file. On Tuesday, NPU-A voted to continue its opposition to the subdivision with a vote on the item it faced, which was a notice of appeal of the city official’s ruling to the city’s Board of Zoning Adjustment. A BZA hearing is set for Dec. 3.

Of note to urban planners: The file presents a detailed view of a high-stakes battle over property rights that involves seasoned lawyers and influential residents.

In the second subdivision case considered Tuesday by NPU-A, an existing house would be demolished and replaced by two houses on two newly subdivided lots. The NPU voted to approve the application. Its non-binding recommendation will be forwarded to city development officials. 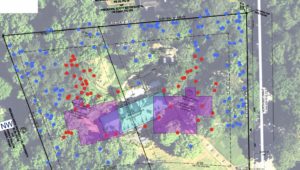 Two proposed houses, marked in purple, are to be built on a parcel that is to be subdivided and an existing house, marked in blue, to be demolished at 549 Broadland Road, at the corner of Broadland Road and Northside Drive. Credit: City of Atlanta

The NPU had no choice but to support the proposal because city codes simply do not prevent such a subdivision of property, according to NPU-A Chairman Brinkley Dickerson. When subdivided, each parcel will comply with the 1-acre minimum lot size required by the area’s zoning category.

Dickerson, a practicing attorney, said neighbors have been reviewing the subdivision issue for years. Their efforts to change the rules, to prevent subdivisions, have been blocked by developers and realtors who don’t want to restrict lots to larger sizes, he said.

The property in question now measures a bit more than 2 acres and is located at the corner of Northside Drive and Broadland Road, at 549 Broadland Road. Fulton County tax records show that house was built in 1940 and now is owned by a family trust.

When one neighbor said the subdivision would “cram” two houses onto small lots, Ben Darmer, the applicate for the subdivision, responded that such an argument is “disingenuous.” Darmer said his own house is located on a lot much smaller than an acre and has served his needs well.

Atlanta most recent neighborhood rezoning was approved in 2018 and it allowed for much smaller lots than envisioned in Buckhead. Atlanta allowed up to 15 houses to be developed on 1-acre lots in the Carey Park neighborhood, west of the Mercedes Benz Stadium.