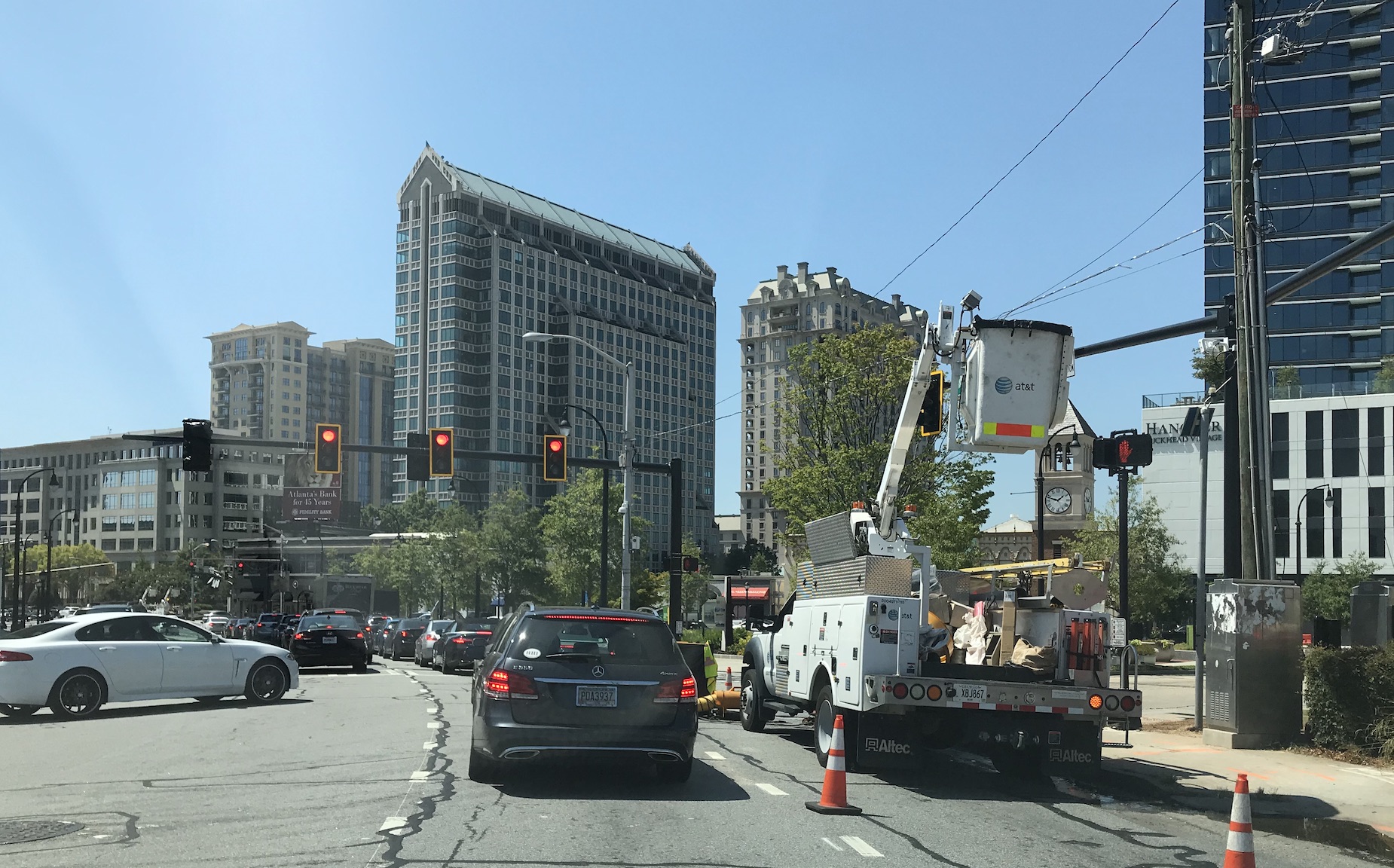 Traffic flows are so heavy in Buckhead that the closure of a lane of Peachtree Road at the Buckhead Triangle on Sept. 6 froze the flow of southbound vehicles to a point north of Piedmont Road. File/Credit: David Pendered
Share18
Tweet
Share
Pin
Pocket
WhatsApp
Buffer6
Email
Reddit
24 Shares

The related challenges of affordable housing and traffic congestion are paired in a new report in Buckhead. Civic leaders have devised a proposal to increase the number of affordable homes in order to enable staffers to reside closer to work and not need a car to commute. 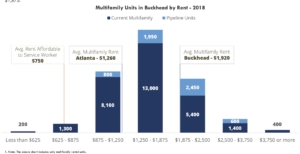 The average monthly rental rate for an apartment in Buckhead is $1,920, which is significantly higher than the average apartment rental price of $1,260 a month across the entire city of Atlanta. Credit: ‘Buckhead Housing and Communting Study, Summer 2019’

Livable Buckhead has released a report that identifies three strategies to address the mismatch in housing costs and job location. Each strategy intends to enable those who don’t earn C-suite salaries to live closer to their workplaces in Buckhead, home of some of the city’s priciest rents and mortgages. The proximity of workforce housing to job centers would reduce the reliance on driving alone to and from work, thereby lessening the number of vehicles on city streets.

While the measures themselves may not break new ground, their significance stems from their sponsor. Livable Buckhead, a non-profit entity that seeks to foster the community, is comprised of regional leaders in sectors including housing, commercial real estate, retail and hospitality. PATH 400 is one of the organization’s signature achievements.

The three strategies are: 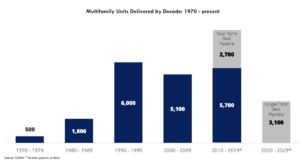 The lead consultant is HRA Advisors. Its previous work in the region includes two projects for MARTA: A revenue and ridership analysis of commuter parking and transit oriented development; and an analysis of how its affordable housing policy affected joint development of TOD proposals.

The study began with a review of traffic and lifestyle patterns. Results confirm suppositions.

Traffic congestion is getting worse in Buckhead – traffic counts have risen by 76 percent in the past decade. Solo car trips are the norm. Some 92 percent of staffers live outside the region. An estimated 70 percent of all staffers drive to work. If housing prices weren’t so high, a significant proportion of these staffers would reside in Buckhead – closer to their jobs and not stuck in traffic.

Parking is one sacred cow that could be altered, according to the report, Buckhead Housing and Commuting Study, Summer 2019.

Parking costs historically have been rolled into cost of developing and maintaining a structure – often at a considerable expense. Surface parking lots are viewed as space wasters; structured parking is expensive to build and to maintain – consider only the maintenance cost of elevators. The report questions if this legacy should continue: 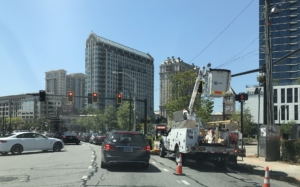 Traffic flows are so heavy in Buckhead that the closure of a lane of Peachtree Road at the Buckhead Triangle on Sept. 6 froze the flow of southbound vehicles to a point north of Piedmont Road. Credit: David Pendered

The notion of adjusting parking criteria isn’t new, but this prospect would push the boundaries of current practices. City codes already stipulate the number of parking spaces based on the square footage of a structure. Office developers have long responded with pricing programs that encourage staffers in a building to park off-site.

Livable Buckhead’s plan addresses a critical market reality: Not everyone who works in Buckhead wants to live there. Some may own a residence elsewhere, may have children enrolled in another school district, or have other reasons to reside elsewhere. The report observes that it attempts to incorporate these issues in its recommendations:

Next steps call for the staff at Livable Buckhead to promote the plan among area business and convince at least some to implement proposals, at least on a trial basis.