The I-75 corridor in Cobb and Cherokee counties is so densely developed that the 30-mile, two-lane toll road to be built in the corridor will have few negative environmental or social impacts. 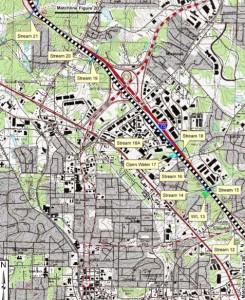 This map of the I-75 corridor in north Marietta shows the dense development that flanks the highway. Credit: GDOT

This is the conclusion of the environmental impact study of the project completed by the Georgia Department of Transportation. While there’s no surprise in the result, the lack of impact on critters and land emphasizes the magnitude of the existing highway and development in Atlanta’s northwestern suburbs.

“This project is defined as the marginal addition of concrete to a 15-lane road,” said Brian Gist, a lawyer with the Southern Environmental Law Center. “When defined that way, it’s easy to come to the conclusion that it will have no effect.”

The population in the two counties has grown dramatically over the past 40-plus years. During that time, the natural landscape has been shaped and built upon to accommodate the needs of new residents, meaning that anything that could be affected by development probably has already been affected.

The state’s plan to improve mobility in the two counties is to install managed lanes at a projected cost of $840 million. This project, and another managed lane project south of Atlanta along I-75, are the first in line to be built under Georgia’s decision to ease traffic congestion by installing managed toll roads. 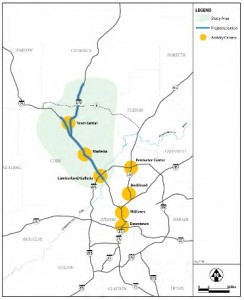 A managed lane system is to be built along the I-75 corridor in Cobb County and along I-575 in Cherokee County. Credit: GDOT

In Cobb and Cherokee counties, the managed lane project is to consist of two lanes between Akers Mill Road and the junction of I-75 and I-575. An additional lane will continue along I-75 to Hickory Grove Road, near Acworth; and along I-575 to Sixes Road, near Holly Springs.

This is the effect the 30-mile project is expected to have, according to the Record of Decision released in May by the Georgia Department of Transportation and Federal Highway Department:

In addition, the government says it has adequate controls in place to protect waterways during construction: “As a result of the ordinances and regulations, cumulative impacts to floodplains, wetlands, streams and water quality are not anticipated.” 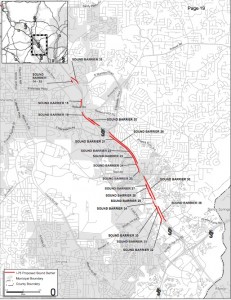 Metal sound barriers are to be installed along I-75 as the managed lanes are installed. Credit: GDOT

The issue of noise is another story. The finding on noise states:

Noise was the only major concern raised in the public comments included in the final report. There appeared to be no questions about run-off, stream encroachment, or wildlife habitat.

People submitted requests for metal noise walls or trees to be erected between their homes and the highway to muffle the noise of passing vehicles.

Paul Robinson, of Marietta, wrote that leyland cypress trees would be a good choice.

“They are attractive and absorb noise,” Robinson wrote. “Metal walls are a total waste of taxpayer dollars.”

Michael Wood, of Marietta, wrote in favor of metal walls:

“I’ve lived [here] for 30-something years. When I bought the house, there was no noise problem at all…. Every time the road is widened the sound gets worse and much louder.”

Gail Rakestraw’s comment was unique. Rakestraw’s brick home – two bedrooms and one bath built in 1959, according to county tax records – has a view of Kennesaw Mountain to the west and I-75 across the street to the east. The managed lanes will be built between Rakestraw’s home and the highway.

“How would you feel if I-75 was coming to your front door?” was the one sentence response on Rakestraw’s comment card.

Construction is to begin in 2014 and the managed lanes are to open to vehicles in 2018.