Atlanta is moving into the land acquisition phase for two projects in the Inman Park area – the Highland Avenue pedestrian remake and the East Side Trolley Line project. Credit: Atlanta

Land acquisition is about to begin in and southeast of Inman Park for two awaited projects – the pedestrian corridor along Highland Avenue, near Inman Park Village, and the East Side Trolley Greenway project that’s to stretch from the Atlanta BeltLine’s Eastside Trail and connect with an existing PATH trail near Coan Park. 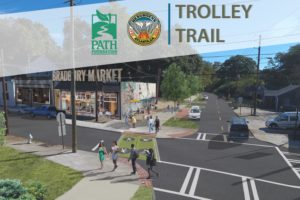 Atlanta is moving into the land acquisition phase for two projects in the Inman Park area – the Highland Avenue pedestrian remake and the East Side Trolley Line project. Credit: AtlantaLine

In each case, the Atlanta City Council is in the process of authorizing Mayor Keisha Lance Bottoms’ administration to acquire a few small pieces of property needed for each job. The city could seek to take the land through condemnation proceedings, if the owners and city cannot agree on a price and transaction, according to pending legislation.

The Highland Avenue project is to be the first of the two to move forward. The council is slated to vote Dec. 2 to authorize the land acquisition process. The project got a green light from the council’s Finance Committee at its Monday meeting.

The Finance Committee took its first formal look Monday at the land acquisition proposal for the East Side Trolley Greenway project. The committee is slated to give the matter full consideration at its Dec. 11 meeting. The council could consider authorizing the land acquisition as early as Jan. 6, 2020, its first meeting of the new year.

Funding for both projects is to be derived from the voter-approved 1 percent sales tax for transportation, according to the legislation. Opening dates and construction timelines do not appear to be included in the legislation.

The Highland Avenue project involves a bike lane, mid-block crossing and other improvements along a stretch of the roadway that includes commercial properties. The area to be improved is between Alaska Avenue and Elizabeth Street.

This is the description of the project as presented in the legislation:

Two properties have to relinquish for the construction plans to proceed, according to the legislation.

Two additional properties need to relinquish land for the East Side Trolley Greenway project, according to the legislation. The cost was not anticipated in the current budget year.

The plan calls for completing a trail along the out-of-use Atlanta-Decatur Trolley line that once connected Atlanta with the campus of Agnes Scott College. The PATH Foundation has already completed a portion of the trail, which advocates hope will again reach into the heart of Downtown Decatur.

The latest project sheet states the project could be built in 2017 and 2018. The same document provides this information: