A surge of foreclosed homes isn’t on the horizon because of the pandemic, but the fate of renters is less than certain because they’re harder for the government to protect, according to a comments in a forum sponsored Tuesday evening by the Joint Center for Housing Studies of Harvard University. 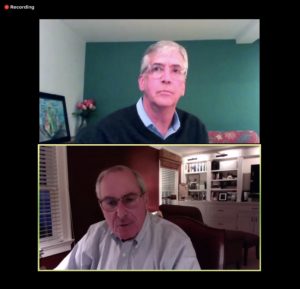 The pandemic is not likely to lead to a near-term surge in housing foreclosures, Don Layton (bottom) said Tuesday during a conversation with Chris Herbert, both with the Joint Center for Housing Studies of Harvard University. Credit: jchs.harvard.edu

Borrowers will benefit from a set of tools that have come into use as the nation’s mortgage industry has been restructured since the Great Recession, which ended in 2009, according to comments made during the hour-long talk: The Housing Finance System During the Pandemic and Beyond.

The forum was conducted on a livestream platform and already is available for viewing.

These tools include mortgage forbearance, which has already been called into play by the nation’s largest home lender. A 12-month payment forbearance on borrowers impacted by the coronavirus was announced in March by Fannie Mae and Freddie Mac. More than $6.3 trillion in funding for the U.S. mortgage markets is provided by these two enterprises, plus the nation’s 11 Federal Home Loan Banks, according to a report by the Federal Housing Finance Agency.

Mortgage forbearance enables borrowers to seek short-term relief from their lender. The tool is specifically intended to help borrowers who run into unexpected financial calamities – such as the loss of income related to a pandemic that has shuttered much of the economy in the United States and around the world.

“In 2008, lenders didn’t know how to handle stress [in the market], so they foreclosed,” said Don Layton a former CEO of Freddie Mac who’s now a senior industry fellow at the center. Layton and the center’s director, Chris Herbert, participated in the forum.

Renters are not protected by mortgage forbearance and other such tools for one simple reason – renters don’t have a relation with the mortgage lenders. 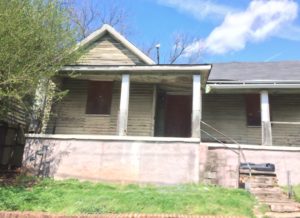 Foreclosed homes in the 30313 ZIP code, west of Downtown Atlanta, were still a common sight in 2015, six years after the official end of the Great Recession. The pandemic is not expect to spark a foreclosure crisis anytime soon. Credit: David Pendered

For instance, the government could seek to shelter renters from eviction by offering mortgage forbearance to the borrower. However, the government has no way to compel the borrower to offer any relief to a renter who may be struggling financially because of the pandemic’s impact.

“With renters, owners are in the way,” Layton said.

The forum was part of the ongoing effort by Harvard’s housing center to provide real-time analysis of issues related to the nation’s housing market. Another example is a report issued Monday that was written by Whitney Airgood-Obrycki, a research associate affiliated with the center.

This report appears to offers a counterpoint to the wait-and-see aspects voiced by Layton and Herbert. Airgood-Obrycki went straight to the heart of data that shows how the sector of folks who live paycheck-to-paycheck face grim prospects because of the pandemic-caused economic turmoil.

Snippets from her report, Pandemic Will Worsen Housing Affordability for Service, Retail and Transportation Workers, include: