Capitol View neighborhood leaders are so unhappy with a proposed development on the old Exide car battery plant that a Fulton board hit pause on consideration of a $2.5 million property tax break for the works.

“I’ve been on this board for the past two years and never have I seen not one public comment,” said Kyle Lamont, member of the board of the Development Authority of Fulton County. 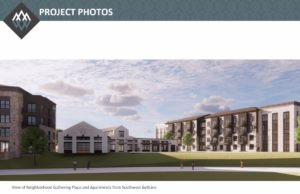 A sketch of the proposed RangeWater Development build at 1246 Allene Avenue in Capitol View. Credit: Special

“But today, we have four people that took the time to directly write to this board in opposition, because they don’t feel like their voices have been heard,” Lamont said. “That is not something that I can, or am willing to ignore.”

Those four letter-writers, and the Capitol View Neighborhood Association for that matter, object to a proposal from RangeWater Development LLC to build a mixed-use project of about 323 multifamily housing units with about 1.2 parking spaces per unit plus about 1,200 square feet of commercial space.

The neighborhood complaints are diverse: not enough low-cost housing, too much pavement, too much traffic on side streets, a building that would be too tall or out of character with the neighborhood. And broadly, that RangeWater is trying to rush the process and not listen to residents.

Design and zoning and community engagement aren’t any part of DAFC’s job. The development authority is set up to promote business in Fulton County, and one thing it can do is approve property tax breaks. RangeWater was there to ask for a property tax break worth $2.5 million over 10 years.

RangeWater’s managing director of Georgia, Joseph Martinez, told the board that the project is not feasible without the tax abatement for 1246 Allene Avenue.

The site needs at least $1.5 million in cleanup from its history as a battery factory, he said. And besides that, Martinez said the development will forego $1.234 million in income because it has to comply with Atlanta’s affordable housing rules. Capitalize that over 10 years and it’s a $2.4 million reduction in value, he said.

Atlanta requires some kind of below-market-rate housing in new large developments along the BeltLine, and RangeWater proposes 15% of its units for households just below the midpoint of metro Atlanta’s income ladder. Going by federal guidelines, “affordable” at that level means rent of something like $1,200 a month for a one-bedroom apartment.

In something near an hour of discussion, board members quizzed Martinez more on the development and the neighbors with increasing skepticism.

But board member Brandon Beach suggested a pause and for Lamont to try and patch things up between RangeWater and neighborhood leaders.

The board unanimously voted to schedule another meeting on the project’s tax break request for a date on or about Nov. 13.

In other business, the builder of a “destination” commercial/retail space on the BeltLine below Grant Park will get a $3.3 million property tax break because of the trouble of developing the lot.

The decision divided a board that’s come under intense criticism for granting property tax breaks in hot neighborhoods where development is likelier to happen sooner or later. Since January 2019, DAFC’s board has given first or final approval to property tax breaks worth almost $190 million over 10 years, mostly in Midtown, Downtown and on the BeltLine.  Atlanta City Council has asked DAFC to stop doing that in the city limits. The tax money foregone would normally go to schools, county and city operations.

But the majority of the board doesn’t see it from Atlanta’s point of view — for them, their work is growing the county’s overall tax base. The rule of thumb is that new subsidized developments have to raise the property tax bill on a site by at least five-fold.

With no discussion on Tuesday, the board voted 6-3 to give their final approval to the 1015 Boulevard property tax break, which will be worth $3.3 million total over 10 years.

When developer Middle Street Partners made their first board appearance this year, its senior partner argued that the development cost is high because of the site’s slope, the cost to remove the old cold storage and the neighbors’ preference for buried parking. And at the time, he got more verbal pushback from the board.

And one more item: An unnamed company is definitely scouting the “South Fulton Region” for a data center location, though it’s still a secret what company is behind the code name “Project Fulton.”

The the board voted a preliminary approval for a property tax break worth some $14.5 million over 10 years to what ever company it is, if it comes here. The data center would be expected to employ about 20 people.

It’s some company that’s shopping among jurisdictions across the metro area and the state, according to DAFC’s documents.