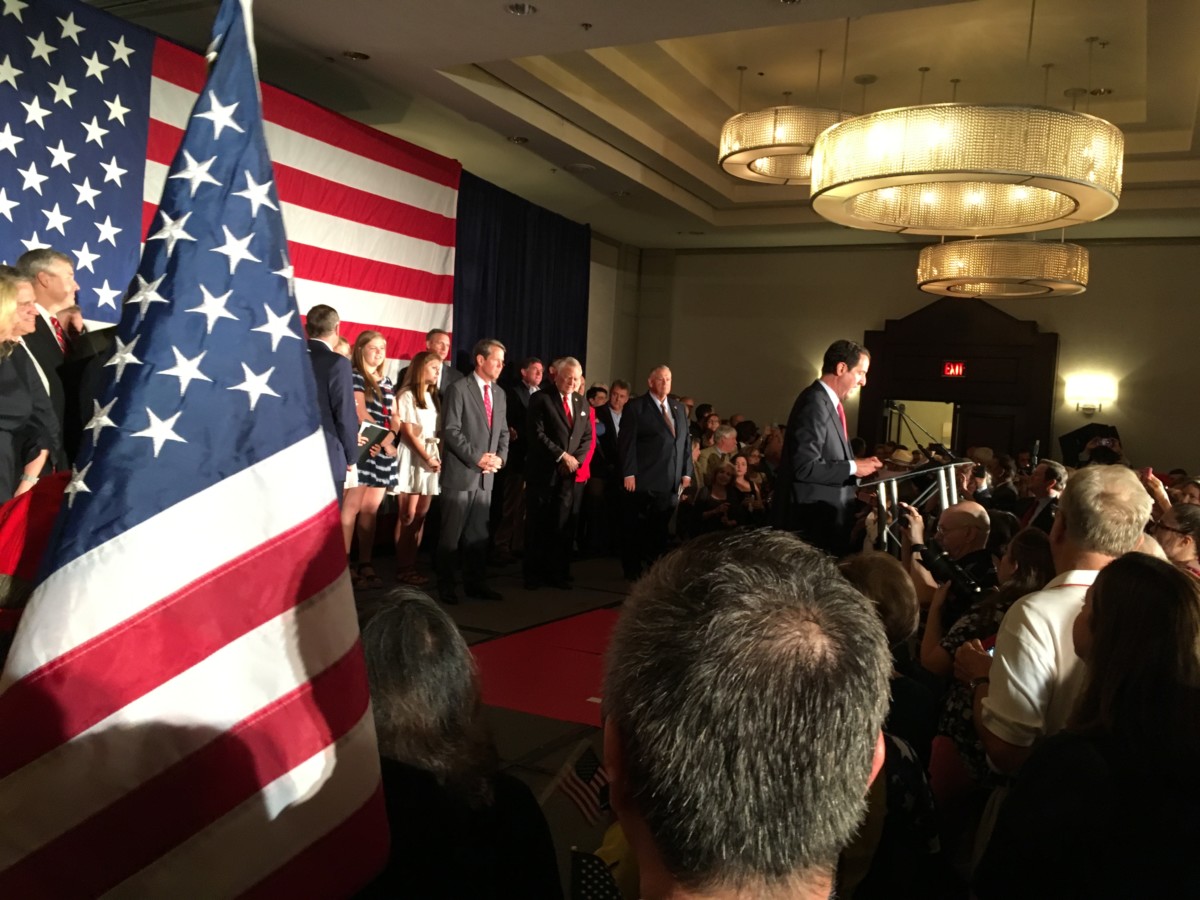 After both parties (mostly) picked their candidate teams this week, Democrats were quick to make a pitch as the party of jobs in a business-friendly Georgia. And Republicans talked about jobs too, but the GOP kicked off its unified campaigning with a rally heavy on conservative values.

With about 70 percent of votes, Republican Secretary of State Brian Kemp flattened Lt. Gov. Casey Cagle in the GOP runoff for the gubernatorial nomination on Tuesday. For the second spot on the ticket, lieutenant governor, unofficial results put Geoff Duncan less than one point ahead of state Sen. David Shafer, close enough for Shafer to request a recount if he chooses.

Democrats had already settled their top two candidates in May: Stacey Abrams for governor and Sarah Riggs Amico for lieutenant governor.

Abrams stopped by an Atlanta bakery and cafe on Friday on a three-day “jobs tour” with stops in Savannah and Macon.

At a press conference outside Bread & Butterfly, Abrams laid out some small-business planks in her platform, including the promise of a fund worth $10 million annually for small-business financing.

She said Georgia has made good progress, but that progress hasn’t reached all communities. Part of her answer to that? Make sure small businesses all over the state can get access to capital and that Georgia’s full of ready-to-hire folks who have skills from baking to ironworking to film production.

The day before, Amico fronted other Democrats in a press conference called by the state party to denounce Kemp as someone whose policies would cost Georgia jobs by endangering Georgia’s standing with businesses of all kinds, including the film industry.

That last industry is a bit of a totem in Georgia politics and may be set against another strong interest in this year’s election: religious liberty legislation.

The film and TV industry has mushroomed since Georgia’s expanded or renewed tax incentives for the industry several times over the last 10 years or so. Though not everyone agrees it’s all good, politicians on both sides of the aisle broadly praise the tax incentives as a good deal that’s sparked the growth of a supply chain of jobs.

But film industry leaders like Disney were among the companies to threaten to leave the state in 2016 if Gov. Nathan Deal signed a “religious liberty” bill.

Broadly, “religious liberty” or “religious freedom and restoration” acts create carve-outs from some laws on faith-based grounds, and they vary among the states that have them.

Supporters, like Kemp, argue they’re an important protection for people of faith against laws that go against their beliefs, and want to get one passed in Georgia. Critics, like Abrams, say such laws amount to a license to discriminate against people who don’t share the same beliefs. 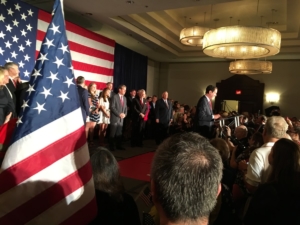 “We need protection against divisive rhetoric and horrible legislation like the religious freedom and restoration act that would restore and legalize discrimination in the state of  Georgia,” Abrams said Friday. “We know that has a chilling effect on business and a chilling effect on the economy.”

Deal did veto the 2016 bill, under heavy pressure. Kemp, for his part, has pledged to sign one.

It would be one that mirrors a federal bill signed by Bill Clinton, Kemp said on Thursday night. “It’s the commonsense thing to do,” Kemp said.

“I’ll be glad to sit down with any business entity in the state and talk them through that because every single other state around us has that in their law or it’s been adjudicated,” Kemp said.

Asked about the film industry in particular, Kemp said he’s committed to keeping the tax credit and that it’s a good deal for Georgia.

He was speaking just after a GOP unity rally in Peachtree Corners. A few hundred elected leaders and party supporters gathered in a hotel ballroom to cheer on the leaders calling for everybody in the party to lock arms after a bruising primary season.

Deal returned to one of his most common talking points, that according to five years’ worth of awards from Site Selection Magazine, Georgia’s the best state for doing business. And, to cheers, pointed out that it’s his Republican administration that’s been “true to conservative values in passing conservative budgets” that have allowed the state to build up its rainy day fund.

Kemp leaned heavily on values. He said Abrams is backed by “billionaires and socialists who want to make Georgia into California.”

He closed his speech with something similar to what he said on election night, that this election is “about fighting for literally … the soul of our state this fall, about our values. It’s going to be about our values and the beliefs that we think make this such a great state to live, work and raise your family.”