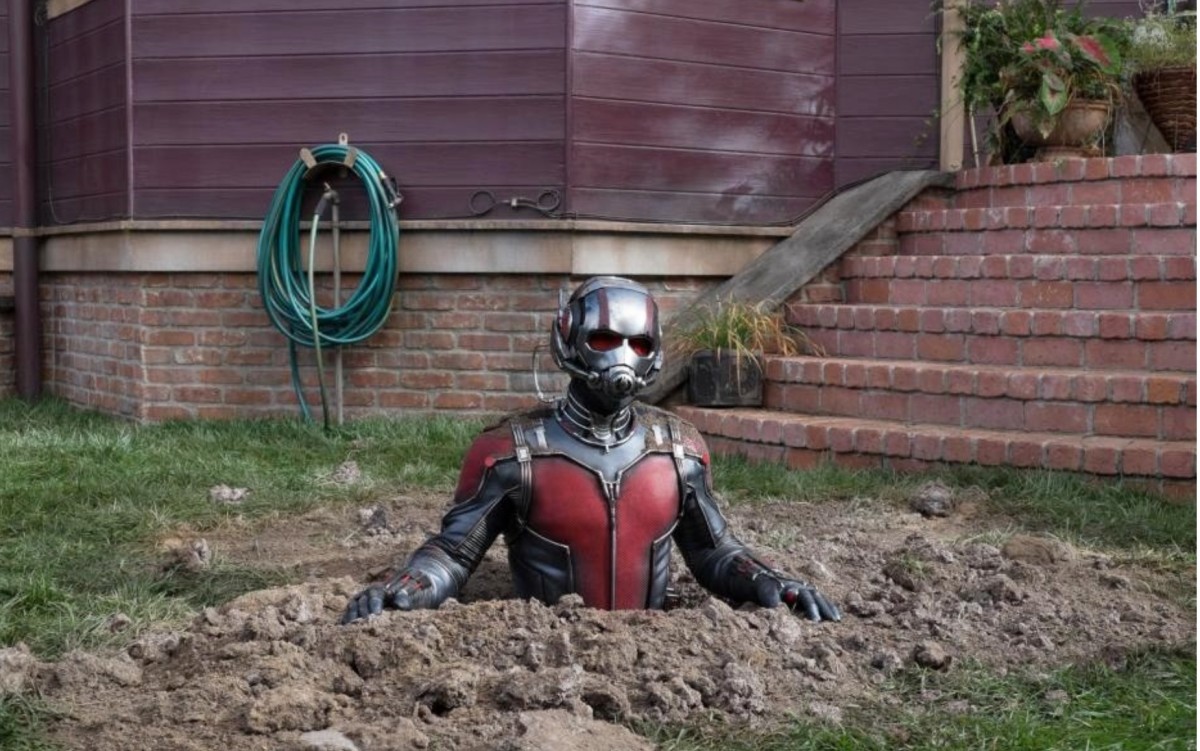 The movie "Ant Man" was filmed at Pinewood Studios, in Fayette County, with a budget of about $130 million and gross receipts of about $180 million, according to imdb.com. Credit: thefineartdiner.blogspot.com
Share22
Tweet
Share6
Pin
Pocket
WhatsApp
Buffer
Email
Reddit
28 Shares

Editor’s note: This story has been updated to remove an inaccurate reference to the average wage paid in Oregon.

Georgia’s film tax credit program may be the grand slam Gov. Nathan Deal contends, but a new GSU report reveals caveats such as the average wage paid for film jobs in Georgia was the lowest average wage among the top 10 states. 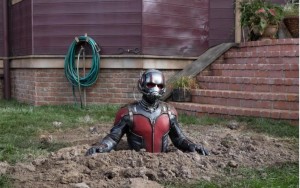 The movie “Ant Man” was filmed at Pinewood Studios, in Fayette County, with a budget of about $130 million and gross receipts of about $180 million in December 2015, according to imdb.com. Credit: thefineartdiner.blogspot.com

Wages are but one factor in evaluating the success of any governmental program intended to spark economic development. So making too big a deal about comparatively low pay may be to miss the forest for the trees.

That’s why the timing couldn’t be better for the policy brief issued Feb. 23 by Georgia State University’s Fiscal Policy Center, “A Description of the Film Tax Credit and Film Industry in Georgia.”

Without mentioning anything but film tax credits and resulting economic impact, the brief provides ample data on the breadth of Georgia’s film industry. As such, the brief paints an economic portrait of an industry the state has courted through tax policy, and is one that could feel unintended consequences of the religious freedom legislation. Not to mention some discussions at the Capitol to reduce or eliminate the program. 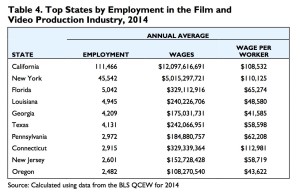 Georgia ranked ninth among the top 10 states in terms of average wages for a film job. Credit: GSU policy brief

Start with cost and benefit.

Film tax credits have cost the state just over $925 million in utilized credits from 2009 though 2014, the brief states, citing data from the Georgia Department of Revenue.

The benefits reaped in just one year, the fiscal year that ended June 30, 2015, totaled $6 billion, the report states, citing a report from the Georgia Department of Economic Development.

Georgia had 4,209 jobs that paid an average wage of $41,585 in 2014 in the film and video production industry. Total wages paid in 2014 in Georgia were $175 million. The GSU brief derived these figures by calculating data from the U.S. Bureau of Labor Statistics’ Quarterly Census of Employment and Wages. 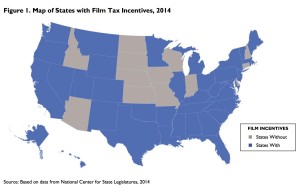 Of note, Deal cited figures that are dramatically different. The governor noted them during his remarks at the Georgia Chamber’s Eggs and Issues breakfast in January.

Citing data from the Motion Picture Association of America, Deal said Georgia has 79,000 jobs with an average salary of nearly $84,000. Total wages paid were roughly $4 billion, the governor said, according to his prepared remarks.

Then the governor laid down his ultimatum in the brewing discussion to reduce or eliminate film tax credits: 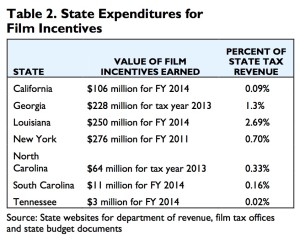 GSU’s policy brief concludes on a note similar to the governor.

Further study is needed to determine the extent of the role film tax credits play in the growth of Georgia’s film industry, the brief states. Such a cost-benefits analysis would recognize that:

That said, this comment is nestled in the one-page conclusion: