The pandemic has not slowed road construction in metro Atlanta, nor prompted Gwinnett County to delay the vote on a proposed 1 percent transit tax. Slowdowns are underway in other states. 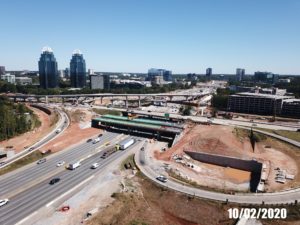 Construction continues on the Ga. 400/I-285 project at a time at least 18 other states have stopped or delayed road construction because the pandemic has eroded tax revenues. Credit: dot.ga.gov

Across the country, the tally of COVID-19 impacts includes:

“That’s a big hole to climb out of, and every state and local government is going to make a different decision about their capital spending and how they are going to address that issue,” Alison Premo Black said, after presenting this scenario at an Oct. 15 event hosted by the Volcker Alliance and Penn Institute for Urban Research. Black is a senior vice president and chief economist for the American Road & Transportation Builders Association.

Black later emailed a list of states that have announced projects delays or cancellations that includes: Florida, Hawaii, Kentucky, Maryland, Massachusetts, Mississippi, Missouri, Nevada, New Mexico, North Carolina, Ohio, Pennsylvania, Vermont, Washington, West Virginia, and Wyoming. Georgia was on the list for potential cutbacks that preceded the state’s adoption in June of the budget for the fiscal year that began July 1.

In addition to the slowdowns are outright threats to transit systems because of declining revenues. New York’s transit system is the national example of a fiscal abyss in a system that  serves 38 percent of all public transit trips in the country. 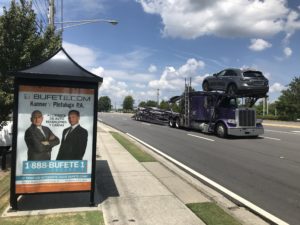 Gwinnett County voters face a referendum on a 1 percent sales tax for transit in an era when the economic slowdown related to the pandemic has prompted a dozen governments around the nation to withdraw ballot measures for transportation. The money is to enhance service along Satellite Boulevard. Credit: David Pendered

Without the $12 billion MTA has requested from the federal government, atop $4 billion already provided, MTA is looking at service cutbacks that could “impair regional transit for decades,” according to an annual audit released Oct. 13 by the state comptroller.

Georgia’s transportation system is not part of this grim situation, according to GDOT Commissioner Russell McMurry’s report at GDOT’s Oct. 15 board meeting.

GDOT’s revenue collections for the fiscal year that started July 1 are about $20.3 million lower, or 1.2 percent, than at this point last year. GDOT’s total revenues to date are $498.7 million, McMurry said.

For the month of September, GDOT collected $171.8 million, comprised of $159.8 million in excise taxes and $12 million in fees. GDOT collects fees on hotel/motel stays, a sum down 29 percent from the same point last year, and from heavy vehicles and electric vehicles, which are up 36 percent compared to same time last year McMurry said.

McMurry said traffic in urban areas is resuming. This traffic is significant in restoring collections on toll roads. A report in August showed toll collections in Georgia were down by 70 percent, compared to forecasts, as the pandemic cut into commuter travel.

“That puts us right where we thought we would be, perhaps a little better,” McMurry said of overall presentation. “We’re right on track. This is sort of positive: We’re seeing traffic volume starting to come back.”

GDOT later provided this statement to elaborate on how the cutbacks have impacted the system:

Georgia reports spending an estimated $10 million a year to collect and dispose of roadside litter. To help curb this cost, but primarily to beautify the state, GDOT and several partners launched on Oct. 20 an anti-litter campaign, Keep it Clean Georgia.

Previous Article
Fulton board hits pause on developer tax break after Capitol View commotion
Next Article
Election Day is coming up. How do I make sure my absentee ballot is counted?