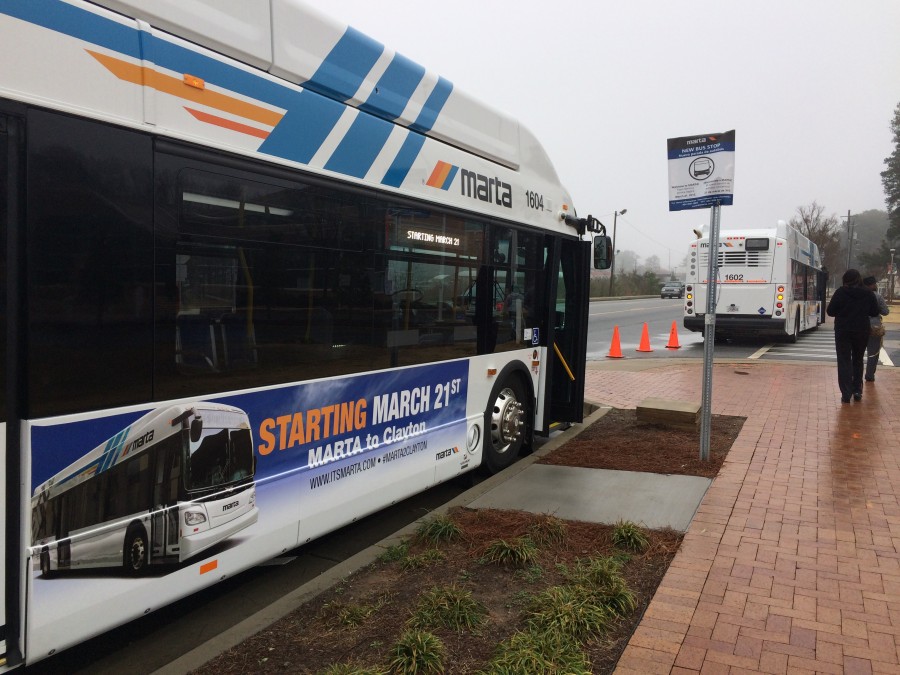 This page has been updated to note full Legislative passage

It took until very last hour of Thursday for final passage, but the Georgia House and Senate overwhelmingly approved a bill that they mean to be the first step toward a more seamless and robust transit network in metro Atlanta. And those same lawmakers have sent the governor a budget that could see tens of millions of new state dollars spent on that transit. 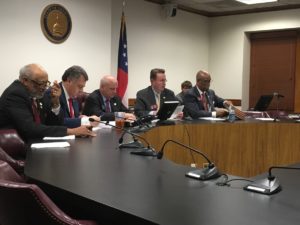 A panel of state House and Senate lawmakers signed a consensus version of transit legislation on Thursday night at the Capitol. Credit: Maggie Lee

“Let’s make The ATL official,” said state Sen. Brandon Beach, R-Alpharetta, as he and a handful of legislative colleagues signed a House-Senate compromise bill in front of an audience of two or three dozen lobbyists, transit officials and others at the state Capitol on Thursday evening. The audience broke into applause.

The House and Senate soon followed with approval, sending the bill to Gov. Nathan Deal for his review.

The bill that everybody calls “the transit bill” puts 13 metro counties at one table under the name of the “Atlanta-region Transit Link,” where they will coordinate their transit plans.

For building projects in the transit plan, counties would be allowed to ask their voters for a sales tax of up to a penny. Counties could set up as much or as little transit as their voters want and the plan envisions.

That way of doing things — sales taxes of less than a penny, for up to 30 years — offers more flexibility for raising transit monty than counties have now.

And counties that take part in The ATL and its transit plan will be eligible to ask for state money for their projects. The first tranche of that long-awaited cash is in the form of bonds in the state budget for the year that begins in July.

That budget calls for $100 million in bonds for transit statewide. But the decision on how exactly to divvy up that money will come a little later.

And with that, state Legislators aim to balance a lot of constituencies. There are residents of MARTA counties who have paid a transit sales tax for years, and there are folks who aren’t interested in bankrolling a bus, much less a train. There are shippers whose goods are stuck in Atlanta traffic, companies that want their employees to be able to reach their jobs without a car.

The ATL in practice would be a board of 16 folks, 10 of whom will represent districts within  the 13-county region.

That board would handle the region’s overall transit plan, said state Rep. Kevin Tanner, R-Dawsonville, one of the main architects of the compromise bill, as well as the author of a House version of it.

However that big plan will be drawn through a bottom-up process, starting with the counties that make up the metro.

Any jurisdiction would have to vote on any new sales tax for transit and OK rail or bus service if their county doesn’t have any yet.

Also under the bill , all regional transit, including MARTA, would be branded with the name “The ATL” by 2023.

Probably the first major prospects for transit expansion are Gwinnett County and possibly a special district within Cobb that its residents and leaders may choose to draw.

MARTA would be the rail provider for any county that opts for heavy rail. The agency’s leaders have long said they don’t want to move into any community that’s not interested in their services, but they are ready when communities are ready to talk.

On Thursday night, asked if the bill contributes to momentum for expansion in Gwinnett and part of Cobb, MARTA Board Chair Robbie Ashe said it does.

He said the bill creates solutions for the individual circumstances of the two counties.

But while part of Cobb is really ready for transit, he said, that’s not totally true in the rest of Cobb.

So hence the bill splits the difference, and gives Cobb that option of drawing a south Cobb transit district.

“This bill, rather than force some all-or-nothing solution, splits the difference and says, “OK South Cobb, you’re ready for transit, we’re going to try and give you that opportunity.'”

Most people in the region think improving transit is important to metro Atlanta’s future, according to the 2017 results of Metro Atlanta Speaks, a survey by the Atlanta Regional Commission.

“The passage of regional transit legislation is a major milestone for our region that will expand transportation options and better connect communities, improving quality of life for metro Atlanta residents,” said Doug Hooker, ARC executive director, in a written statement. “The establishment of a coordinated, regional transit network is critical to the region’s future and will help ensure our long-term economic competitiveness.”

There are some tweaks from first drafts in both the House and Senate. There’s no longer any sales tax on rides from services like Uber and Lyft, nor is there any concession tax at the airport to fund transit.

“The ATL” would be administratively attached to the Georgia Regional Transportation Authority; the new agency will take over transit operations from GRTA by July, 2021.

Next year, the Legislature is expected to work on a sister bill to work on expanding transit in smaller cities outside of Atlanta as well as in rural communities.

Previous Article
Delta’s Ed Bastian: We won’t ‘let the state run our business’
Next Article
Georgia Legislature sets up Atlanta tax votes, but not for BeltLine