All Georgia voters will see at least three ballot questions. All of them got strong bipartisan “yes” votes in the state Legislature, but would need the OK from voters to become law.

This one is the result of years of lobbying by environmentalists and local governments who are angry that the Legislature will set up fees for one thing, like cleaning up illegal tire dumps, but then spend the money on something else. 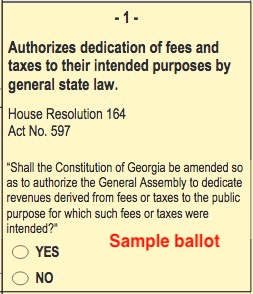 A “yes” vote will make it harder to divert such fee money elsewhere. A “no” vote leaves things as they are.

The marquee case is the $1 fee Georgians pay when they buy a new tire. That’s actually a state “disposal” fee for the old tire, and Georgia’s law books say all those dollars have to be spent on cleaning up illegal tire dumps.

But the state doesn’t actually spend all those dollars on tire cleanup.

The Legislature doesn’t have to listen to how their predecessors tell them to spend money. It takes something stronger than a plain law to do that, such as the Constitutional amendment that channels lottery funds to HOPE.

This proposal before voters now would set up kind of a halfway house: a supermajority of the legislature could dedicate fees — make all that tire money be spent on tire cleanup, say. But in case of financial emergency, the supermajority could still vote to use the money for something else.

Wait, don’t fall asleep, this one has to do with suing the state of Georgia or local governments. 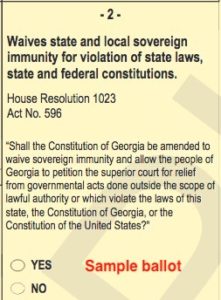 So, if folks think Georgia or its cities or counties are doing something contrary to the U.S. or state constitutions, it’s no good trying to bring those governments to the state’s courts. Since a 2017 Supreme Court of Georgia ruling, the governments have been able to reply “sovereign immunity!”, meaning they’re claiming immunity from being sued.

For example, there have been a lot of mask-related city and state executive orders going around lately.  If you think any of them are unconstitutional, good luck suing because the government would probably reply “sovereign immunity.”

A “yes” vote would basically dismantle sovereign immunity. A “no” vote means keep things as they are.

The Georgia Legislature passed a sovereign immunity bill in 2019, but Gov. Brian Kemp vetoed that version in part over concerns that the judiciary might intervene too far in the in the state’s daily operations. This year’s version is a little different. 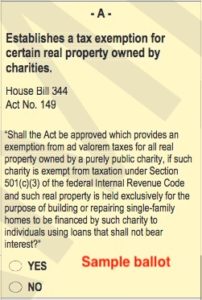 Nonprofits in Georgia are already eligible for many tax breaks. But property tax bills are hitting nonprofits which own property for some amount of time as they build or rehab single-family homes. It would cover organizations like Habitat for Humanity, or any similar nonprofits that follow the same model.

A “yes” vote waives property taxes while property is held by any nonprofit that’s working on a house that will be sold on under a no-interest loan.  A “no” vote keeps things as they are. 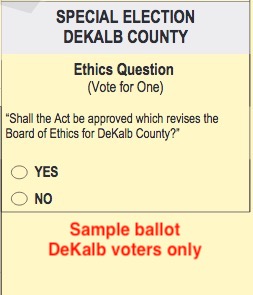 DeKalb County’s Board of Ethics stopped meeting in 2018, after the Supreme Court of Georgia ruled that the board appointment process was unconstitutional because non-government organizations picked many of the board members.  So since then, there’s been no board to hear complaints about abuses of public office, conflicts of interest, misuse of county property and all those kinds of things.

DeKalb lawmakers have been struggling to agree on the fix since then.  The bill setting up this vote, House Bill 1243, had near-unanamious support in the Legislature.

A “yes” vote would set up a county ethics board. Three of its members would be picked by DeKalb’s state representatives, another three by its state senators and one more by the county tax commissioner.  A “no” vote would leave things as they are.

City of Atlanta only, homestead exemption

The typical Atlanta homeowner who lives in their home gets a basic $30,000 homestead exemption on property taxes. 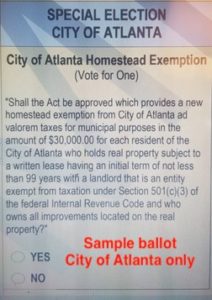 But not low-income Atlantans who get on the property ladder by buying houses that are on land that’s owned by nonprofit land trusts.

A “yes” vote on this would extend a $30,000 standard homestead exemption to folks who buy houses atop land trusts. A “no” vote would keep things as they are.

A nonprofit land trust buys and holds land that has homes on it. Then people can come and buy  just the house that sits on top of the land (and get a long-term lease on the land itself.) That’s a cheaper prospect than trying to buy a house plus land, so it’s a more attainable first rung on the property ladder.

There was no local opposition to this proposal in the state Legislature. It passed both the House and the Senate as part of a bundle of non-controversial local legislation.

There are are only a handful of land trust properties in the city. The lack of homestead exemptions for land trust buyers has only recently become an issue as interest and investment has increased in the land trust model.

Read more about the land trust model in Atlanta.

This story has been updated with the section about the city of Atlanta’s homestead exemption vote.