GRTA is completing a strategic plan that envisions Xpress bus service direct to Atlanta’s airport as part of an expansion of a transit service that has consistently received state funds for operations since the great recession.

GRTA started work on the plan in January 2014, months before state lawmakers began a series of public meetings last summer that resulted in the transportation funding bill now pending in the Senate.

Once the plan is finalized, GRTA would implement the expanded service as funding becomes available. That conversation is premature until a plan is established. The schedule calls for the board that oversees GRTA to accept or adopt the strategic plan this summer. This is the first comprehensive review of Xpress since it was started a decade ago.

Xpress service to the airport would be provided from 18 to 20 hours a day, seven days a week, along routes serving four quadrants of metro Atlanta:

A survey of non-users of Xpress buses showed the airport is the place they most want to go. A telephone survey of 1,652 non-users revealed that 23 percent cited the airport as the most popular destination, followed by downtown Atlanta, 18 percent; Midtown, 13 percent; and north Fulton, 11 percent. 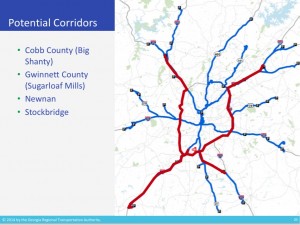 Atlanta’s airport would be a destination for Xpress bus service from four quadrants of metro Atlanta in a strategic plan GRTA is completing. Credit: GRTA

Of note, the survey revealed little demand for Xpress service in three major employment centers: CDC/Emory University; Buckhead; and the commercial corridor spanning Marietta, Alpharetta, and Duluth. All three showed a lack of concentrated demand and roadway constraints. All but the northern arc have some level of transit now available.

Other major initiatives cited in the draft version of GRTA’s strategic plan include:

Job growth is a driving factor in the strategic plan. About 70,000 additional jobs are forecast by 2030 in four areas that already host traffic congestion:

All along, a central notion of GRTA’s potential expansion has been to get more bang from the bucks being spent to create managed lanes. Managed lanes have been a cornerstone of the state’s approach in metro Atlanta since about 2007, when the board that oversees the state Department of Transportation adopted the concept as policy.

Meanwhile, GRTA has received significant state funding to operate Xpress buses since the great recession. The state filled a gap created when local governments were not able to make scheduled payments because of their declining revenues.

Gov. Nathan Deal quietly inserted funding for GRTA’s Xpress bus service into the state budget in a way that facilitates ongoing funding. Previously, operating funds were considered on a stand-alone basis, in which lawmakers could more easily snip them out of the state budget.

Deal has again inserted operating funds for Xpress in his budget proposal. In the budget for Fiscal Year 2016, which begins July 1, Deal proposed providing GRTA with $8.1 million to operate Xpress bus service. The House reduced the amount by $800,000. The reduction is viewed as stemming from a desire to fund other programs, as opposed to a policy statement on Xpress bus service.

The Senate is now considering the budget proposal. GRTA has asked for the governor’s funding level to be reinstated.

Regardless of the outcome, the $8.1 million is not expected to cover operational expenses for a year. The Legislature would be asked to cover the shortfall in the mid-year budget to be adopted in early 2016. That’s what happened this year, regarding the projected shortfall in the budget that expires June 30.