In a city never too busy to demolish, Peachtree Street’s iconic buildings on display at Ga. Tech 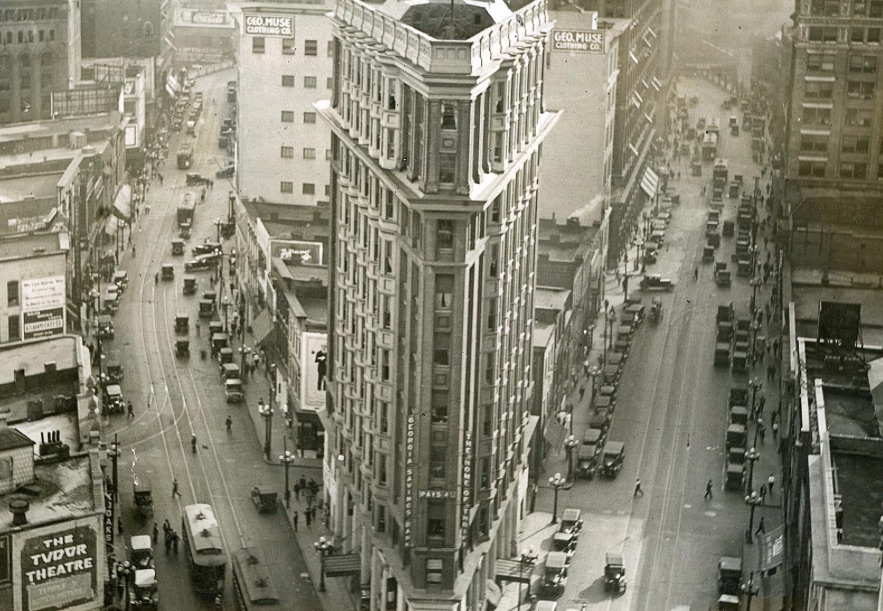 The Flatiron Building in downtown Atlanta was built in 1897 and is featured in a new architectural exhibit at Georgia Tech. Credit: atlantatimemachine.com

In a city that doesn’t hesitate to tear down old buildings, Georgia Tech is providing glimpses of the iconic structures that created Atlanta’s marquee Peachtree Street corridor. 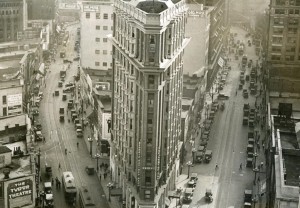 The Flatiron Building in downtown Atlanta was built in 1897 and is featured in a new architectural exhibit at Georgia Tech. Credit: atlantatimemachine.com

About 30 buildings are represented in the exhibit, titled, “The Peachtree Way.” The buildings’ stories are told through architectural drawings, renderings, and modern photographs.

“These buildings give us an idea of what Peachtree was like, ‘Once upon a time,’” Kirk Henderson, records manager for the Georgia Tech Library and an exhibit organizer, said in a statement.

The exhibit provides a sense of what Franklin D. Roosevelt saw in 1932, when he rode in an open car along Peachtree Street. More than 25,000 citizens lined the street to get a glimpse of the presidential candidate whom some already considered an adopted Georgian, because of the time he spent at Warm Springs, according to a report on Galileo, an online initiative of the University System of Georgia.

“The Atlanta Constitution’s headline read ‘Next President Made Welcome by Vast Throng. Expresses Appreciation for Georgia’s Welcome, Delight at Returning to ‘Other House’,” is how the Galileo report characterized FDR’s reception in Atlanta. 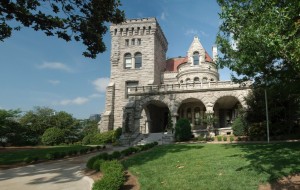 Rhodes Memorial Hall, all 9,000 square feet of it, was built from granite quarried at Stone Mountain. A model of the home is featured in Georgia Tech’s architectural exhibit. Credit: georgiatrust.org

One of the oldest buildings featured in the exhibit still stands – the Flatiron Building, initially named the English-American Building. It’s located in Atlanta’s central business district, a stone’s thrown from Five Points.

Built in 1897, the Flatiron Building came during a dynamic era and predates the more famous building of the same name that’s located in New York City. The New York version opened in 1907, according to a report by the National Park Service’s Register of National Historic Places.

Atlanta’s Flatiron opened just two years after Booker T. Washington helped imprint Atlanta on the civil rights map by delivering his “Atlanta Compromise” speech at the Atlanta Cotton States and International Exposition. Washington, president of the school that became Tuskegee University, presented a philosophy of race relations that lasted a generation, until it was rejected in the 1950s by the civil rights movement led by the Rev. Martin Luther King, Jr. and others.

The Flatiron Building was an ornate marvel of the construction technology of its day. According to the NPS report:

John Portman is honored with an entire section devoted exclusively to his buildings along Peachtree. Portman is a Tech alumnus and namesake for whom the John Portman Dean’s Chair in the College of Architecture.

No exhibit on the architecture of Peachtree would be complete without a representation of the Fox Theatre. The story of the preservation of the “Fabulous Fox” is told in a full section of the exhibit.

“That was really a turning point for Atlanta in terms of preservation instead of destruction,” Henderson said.

To visit: “The Peachtree Way Archival Exhibit” is open to the public weekdays during business hours, through May 27, in Tech’s Stubbins Gallery (East Architecture Building: 245 4th St NW Atlanta, GA 30332). See the website for more information.