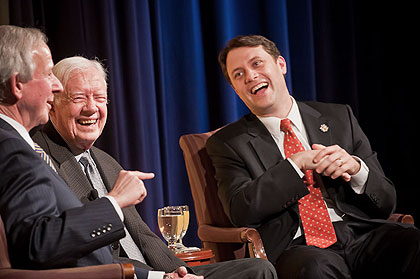 At 87, Jimmy Carter hardly acts or seems old, especially when he bantered about life, politics and family with his grandson Jason Carter last week at the Carter Center.

The two men, separated by two generations and different dreams, together reflected on the common forces that have driven their family. 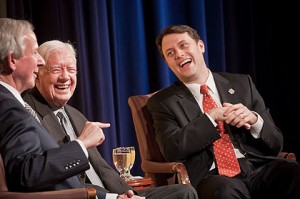 Driven Jimmy Carter past national vilification for his presidential failures, driven him into the humanitarian work that has changed the world, and driven his grandson to follow the example set by the older generations – including the women behind the men.

Regardless of one’s politics, Jimmy Carter’s reinvention from defeat, the hard soil of middle Georgia to worldwide acclaim, is a worthwhile one in any year. In a presidential election year when candidates twist and manipulate their own personal histories to please voters, Carter’s turning points are particularly relevant to making a true difference in the world.

Not to mention how this Nobel Peace Prize winner is inspirational simply by age alone – 87 is not a typo. He is the patriarch to three sons, one daughter, nine grandsons, three granddaughters, two great-grandsons and four great-granddaughters.

At an evening gathering of the Duke Club of Atlanta – where Jason graduated in 1997  – the Carters spoke to 450 Duke alumni on crises and contemporary issues.

“Your biography is almost mythological,” said Duke President Richard H. Brodhead in the introduction of Jimmy Carter. The mythic stature is tied to the simple stories from Plains, the middle Georgia town where Jimmy Carter figured out who he was.

In 1953, he left his Navy submarine when his father died, returning home for two weeks to see to the family’s peanut farm and his father’s estate. What he left with was an understanding of local duty.

“I’d see people at the back door and front door of our house, who would tell me what my father’s life had meant to them,” Carter recalled. 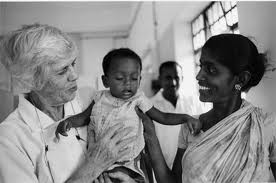 That impact led Carter to successful request, through then-U.S. Senator Richard B. Russell, a resignation from his naval service “so I could return to my community, become a Sunday school teacher, Boy Scout leader, serve on the local school board and hospital board,” Carter recalled. Eventually, that path led him to become our 39thPresident.

His widowed mother, “Miss Lillian,” stood as the female force behind the future President – and served as a paragon of inspiration to the Carter progeny. She served in the Peace Corps as a senior citizen.

“The Peace Corps really infected our family,” said Jason Carter, 36 and the oldest in his generation of Carters (his father is Jimmy’s son Jack).

Jason Carter’s postgraduate service in South Africa was deeply influenced by a local matriarch named GoGo – a Zulu term for grandmother – whom he wrote about in his memoir, “Power Lines.”

The Carter family’s esteem for their elders translated well into these faraway cultures and helped them return home with greater wisdom about adapting and flourishing throughout life’s uncertainties.

“I rented a room from GoGo, and her life was constrained by apartheid,” Jason Carter said. “In 1975, she was forcibly removed form her home; 23 years later, she was the mayor and the postmaster, the dressmaker – she was everyone.” 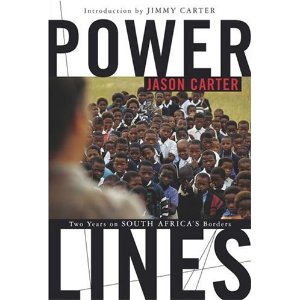 From Miss Lillian and GoGo, the Carter men understood that education was separate from true learning. Who we are is not what we have, but what we give to others.

That knowledge helped Jason Carter bridge the two worlds he experienced in South Africa. He could visit the typical Starbucks brewing lattes in the white neighborhood, only to return to his village without electricity or running water. “Trying to live in two places at the same time,” he said.

The bridge of understanding was tenuous and under stress from cultural forces.

Not too long after his Peace Corps experience, Jason Carter and his fiancée registered at Crate and Barrel. “I sat outside and cried afterwards,” he said. “I didn’t need eight high-ball glasses, and I knew it.”

The Carter family’s belief in equality led Jimmy Carter to build a Habitat for Humanity house for a week each year, for 28 years. His example led scores of volunteers to follow his boot steps.

“I don’t know of anything as successful as that in building self-respect,” he said.

Meeting people like that in his various pursuits, “It dawned on me they were just as intelligent, they were just as ambitious, and their family values were just as good as mine,” he said. “It’s not a matter of superiority or generosity or handing out gifts to others who are less than you. They just haven’t had a chance in life.”

That understanding that “we are all in it together” is missing in the Georgia Legislature and in national politics, Jason Carter said, quickly adding that he has “no interest at all in going to Washington” as a politician.

On the topic of equality, both Carter men pointed to the “Occupy” movement as an important, successful political warning about the widening gap between haves and have-nots. “Why is it easier to believe that 150 million people are lazy than it is to believe 400 people are being greedy?” said Jason Carter, quoting a Facebook post that he had seen posted by several friends. 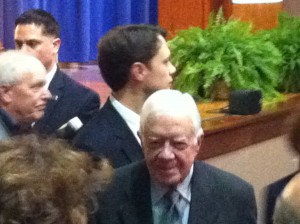 Jimmy Carter with his son Jason Carter on Feb. 15 at the Carter Center.

The Carters’ value of courtesy was embodied by their language and greetings. Jason Carter still calls his grandfather “Pa Paw,” a loving moniker that invited the audience into their relationship as gentle Southerners.

Jimmy Carter talked about how back in the day, debates always honored “my distinguished opponent.” That expression has fallen out of usage among politicians, and so has the belief that real change can be effected through the American political system.

The youngest generation of voters – those still in high school, such as those taught by Jason Carter’s wife Kate at Grady High School, are active and engaged politically with this caveat: “If they can do it with their hands and they can see and feel it,” Jason Carter said.

“They are figuring out what success looks like… they don’t have the ultimate goal of celebrating at the end, but of moving the ball forward.”

The Carter family wit was on display this evening, as he cracked on Brodhead’s chattiness among other topics. In 1997, Jason Carter’s graduation at Duke prompted Jimmy Carter to deliver the commencement speech there,

“They won’t remember what I say in five years,” Pa Paw remarked then to Jason.

“It depends on what you say,” Jason replied.

What these men said on this evening was not what most of us will remember in five years – that will be their drive to discover their greatest purpose, and model that to others.

Michelle Hiskey is a freelance writer based in Decatur, and a 1986 graduate of Duke University. She can be reached at michelle.hiskey@gmail.com