Krispy Kreme’s efforts to bring back the fire-gutted doughnut shop on Ponce is good news that would be even sweeter with more input from local preservation experts.

The shop has been a Midtown institution for over 55 years, attracting customers to its 24-hour drive-thru with an iconic neon sign. Now that local history has a darker chapter — two fires this year, one ruled arson and the other suspicious, that have the doughnut-making on hold. 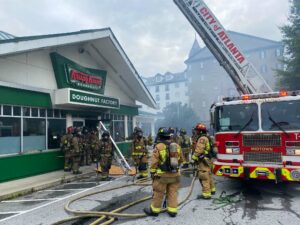 Firefighters tackle the July 7 fire at the Krispy Kreme, the second blaze to hit the shop this year. Credit: Atlanta Fire Rescue Department

The North Carolina-based corporation has said it will rebuild and reopen the shop with some original elements preserved, including the iconic sign, but details are lacking. Plans filed with the City of Atlanta show a total reconstruction of a significantly smaller shop and unspecified changes to the panels on the sign. While much news coverage has alluded to the deep pockets of the local franchise owner, multimillionaire basketball and multimedia star Shaquille O’Neal, the reconstruction plans are spearheaded by the mother corporation and a house architect that designs all of its shops to meet brand standards.

Despite its local-landmark status and meeting the rule of thumb that 50 years and older is potentially “historic,” the shop has no official historic designation or protections. Three Atlanta historic preservation organizations — the Georgia Trust for Historic Preservation, the Atlanta Preservation Center and Historic Atlanta — say Krispy Kreme has not contacted them for restoration advice. And all three have ideas, along with general enthusiasm for Krispy Kreme’s willingness to remain, rebuild and preserve.

APC Executive Director David Yoakley Mitchell has questions about how original materials would be incorporated into a new building and stored during construction. But, he said, such projects show that historic preservation is not just about freeze-framing a building or a document. “It’s creative,” he says.

Krispy Kreme is known for making doughnuts in its shops, where the public can watch the process as the treats move along conveyor belts and rollers, and for the “Hot Light,” a sign announcing when a fresh batch is ready. The shop at 295 Ponce de Leon Ave., at the intersection with Argonne Avenue, opened in late 1965. That was during the era when the brand was expanding through the Southeast on its way to becoming a national franchise. The shop was considered a relocation of an earlier Krispy Kreme wholesale store nearby and an expansion to the familiar retail shop model, or “plant,” as the company called it then. 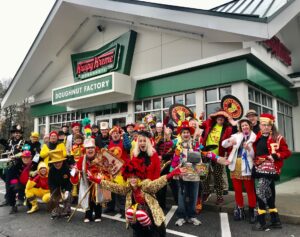 The Krispy Kreme in happier times in February 2020, when the Seed & Feed Marching Abominable band made one of its surprise stops at the shop. Credit: Kelly Jordan

A December 1965 ad in the Atlanta Constitution announcing the opening, provided by Historic Atlanta, shows the shop looked much the same as it does today: a house-like main structure with a boxy extension to the west. And the sign had the same basic structure: a large “Krispy Kreme” logo and the word “doughnuts” in neon surrounded by a neon braided design, all capped with a round mini-sign of the company’s initials. The main exterior changes since then are a shortening of the box-like extension and the replacement of a “coffee” panel on the sign to one that can be customized with removable letters. The interior was redone in the early 2000s.

The Krispy Kreme is part of a fabric of historic and cultural landmarks in the area. It sits catty-corner from the Atlanta Eagle gay bar and the Kodak building, both of which are up for official City landmarking. It’s about a block from the Yaarab Shrine Center and about three blocks from the Fox Theatre. It’s just down the street from another dining landmark, the meat-and-three institution Mary Mac’s Tea Room.

But the Krispy Kreme sits just outside the Midtown Historic District, which is on the National Register of Historic Places, and whose boundary is on the other side of Ponce. That district’s creation dates to 1999, when the Krispy Kreme would not have qualified as historic under the 50-year rule of thumb. It’s also not touched by any historic district in the adjacent Old Fourth Ward neighborhood.

In the wake of the fires on Feb. 10 and July 7, there’s nothing preventing Krispy Kreme from bulldozing its piece of that history aside from its own goodwill. Krispy Kreme has that intent, according to an Atlanta Journal-Constitution report following the July blaze that quoted the corporation as saying, “We know how much the local community loves the shop and that love is absolutely mutual. We pledge to keep the community informed as we embark on the path to turning back on our legendary glazer and Hot Light at Ponce and return to sharing awesome doughnuts and lots of joy there.” 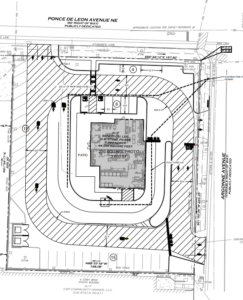 One of the site plans for reconstruction of the Krispy Kreme as shown in City of Atlanta permit application files.

But Krispy Kreme did not respond to SaportaReport questions, and acquiring its reconstruction plans took some doing, as they are not available in the publicly accessible City permitting system. (A City spokesperson said the plans won’t show up until they are approved.) The plans name the owner as Krispy Kreme’s global product office in Charlotte, North Carolina, and state and Fulton County records show the property is owned by an LLC registered at the corporate headquarters in Winston-Salem.

Those plans show Krispy Kreme intends to demolish the fire-damaged shop and replace it with an entirely new shop about one-third smaller. The new shop would be 3,800 square feet — down from the current 5,693 — with a patio and is estimated to cost $300,000. There is no mention of including original materials, though that is not necessarily a standard part of such construction permit applications. In addition, all of the pavement would be replaced and the surface parking increased from 34 to 37 spaces.

As for the iconic sign at Ponce and Argonne, one plan has a note saying, “Existing sign to be re-paneled and remain in place.”

“Re-paneling is another name for re-facing/restoring the sign,” said Steve Stephens, general manager of United Signs, a Norcross-based sign company that is not involved in the Krispy Kreme project. He said the parts of the sign with the company name and logo are acrylic panels that would have been made by heating the plastic in an oven over a wooden form.

At least one acrylic panel on the Krispy Kreme sign had a crack running through it earlier this year. “There is a remote possibility to repair [that damage] using an acrylic adhesive, but the crack would still be visible,” said Stephens. “Most likely, a new face would need to be made. Very few companies still do this process.”

What to preserve and how

For the leaders of the local preservation organizations — all of whom were interviewed before SaportaReport obtained the reconstruction plans — step Number One is considering whether it’s possible to rehabilitate the existing building. Mark C. McDonald, president and CEO of the Georgia Trust, pointed to an outsized example: the Hancock County Courthouse in Sparta, about halfway between Macon and Augusta, which was gutted to the exterior walls by a 2014 fire and restored in 2016. “It has received numerous awards, including one from the Georgia Trust,” McDonald said. 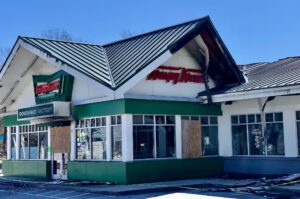 The Krispy Kreme as it appeared in February following a fire that was ruled an arson. Credit: Kelly Jordan

Mitchell at the APC noted two restaurant precedents in the past decade: the comeback of Buckhead’s OK Cafe from a devastating fire, and the painstaking renovation of Manuel’s Tavern, which included using a digital scan of the entire interior, along with photography and video, to restore pictures and small souvenirs to their original places on the walls. In fact, Mitchell is seeking permission to scan the burned-out Krispy Kreme “so you have that building preserved digitally for posterity.”

For Charles Lawrence, Historic Atlanta’s board chair, the renovations carried out nearly 20 years ago make the building less historically important than the iconic sign. “The sign is about the only original historic element and I am glad to hear they intend to restore it,” he said. But, he added, even though rebuilding the Krispy Kreme to look like the original may be possible, “I doubt that is their intention and I’m not sure this would be a good candidate for that approach considering how much it was altered over time.”

Taking a wider, urban-planning perspective, Lawrence suggested a bigger redevelopment could be in order. He said that “the site, which is mostly surface parking, should be more fully utilized — especially in this part of town.”

Mitchell took a different view of the site, which ties into a broader definition of preservation. 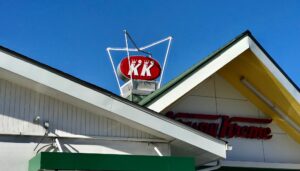 A crown-like sign displaying the Krispy Kreme initials is among the distinctive features of the Ponce shop. Credit: Kelly Jordan

“If they are indeed rebuilding a Krispy Kreme there on site like that, as opposed to trying to create a brand new, major construction and 80-story highrise, … I think that speaks volumes of the organization. It makes eating a doughnut taste a lot better,” said Mitchell.

“At the risk of sounding horrible, … let’s face facts. It’s a conveyor belt that makes doughnuts,” Mitchell continued. “We’re not talking about … Notre Dame where an oak tree has to be felled to make it again.”

Instead, it’s about what the community lost: a place where people got jobs, went on dates, and — like Mitchell has done with his own family — bought themselves a sweet little treat that virtually anyone can afford.

“Sometimes the preservation is [of] the experience,” said Mitchell. “If that’s where you’ve been going for 30 years to get your donuts for office parties and now that’s going to be returned, I think that’s pretty cool.”

It’s also pretty important, he said, to properly handle the historic materials that will give those returning and future customers a touchstone to the past.

The corporation clearly understands the Ponce shop is something special and intends to keep part of what makes it unique in Atlanta and among its roughly 1,400 international locations. Krispy Kreme would be wise to consult these local historic preservation experts to ensure it’s not only doing the right thing, but also doing it the right way.