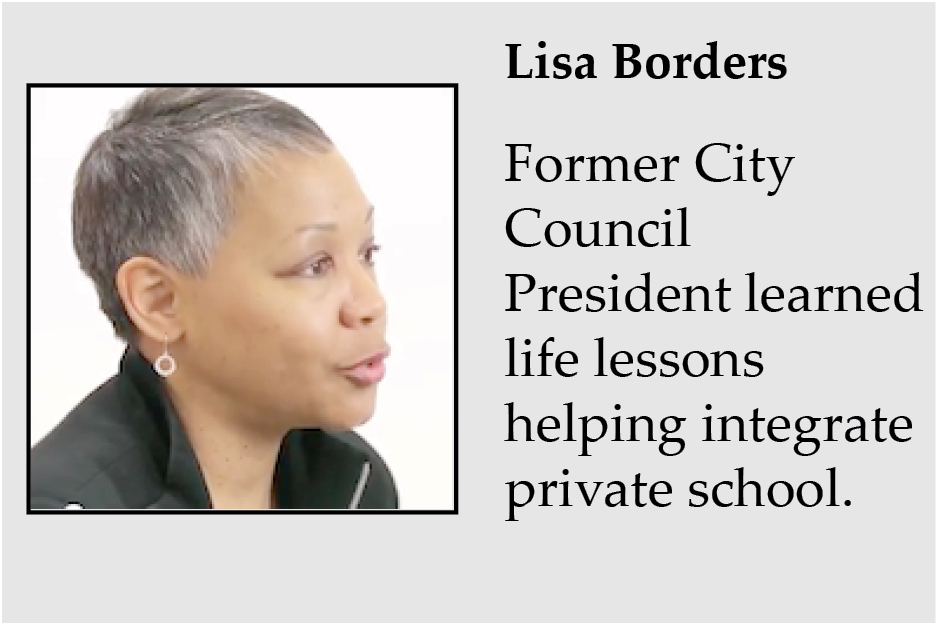 Seventh grade can be an awkward time for any student, but for former Atlanta City Council President and current Grady Foundation President Lisa Borders, helping to integrate an independent private school in Atlanta made it especially challenging.

“What I learned is that I had the capacity not only be at that school, but to excel, and it taught me to deal with adverse circumstances, always,” Lisa said. “So there I had to stay focused on getting my diploma, regardless of what others thought. What was important was how I responded.”

Lisa’s Moment occurred in the fall of 1969, when she was 11 years old. She had just finished the sixth grade in the Atlanta Public Schools, where she was not challenged and had earned a D in conduct. Her parents wanted a more academically challenging environment for her. Her grandfather, Rev. William Borders, was a friend of Dr. William Pressly, who had helped found The Westminster Schools in 1951. In 1965, Pressly and his board took the lead for other independent Southeastern schools, admitting four African-Americans as students.

“I looked different from every student on the campus, save the other seven African Americans who were there,” Lisa recalls. “It was tough for me, probably tougher for the students who were unaccustomed to having an African-American in their midsts. I found students were mean, many of them. They ridiculed things they didn’t understand or were unaccustomed to. And that’s still the case today, in life and in the world: When we don’t understand something, we ridicule it. we push back on it. We disagree with it. Primarily because we are afraid.”

She remembers being called names and having racial slurs written on her locker. But she found a path through it. As she said, “It’s very difficult to argue with results.”

Lisa made honor roll and eventually was elected president of her class in her junior year. She remembers when she decided to break another barrier, becoming a cheerleader. Two students, Elaine LeCraw and Liz Haverty, took her under their wings. “Elaine took it as a personal challenge. She told me to come to her house every afternoon from 3:30 to 5:30 – and I did. She taught me how to cheer and to point my toes. When it came time for my audition, I performed flawlessly and made the team.”

Lisa excelled academically as well, gaining early admission to Duke University. She then earned a masters in health administration from the University of Colorado, later working for two health care firms before starting her own consulting firm. She served as a Senior Vice President of Marketing and External Affairs with Cousins Properties. In 2004, she won a special election as City Council President and was re-elected a year later. She ran for mayor in 2009, but didn’t make the runoff. She served as co-chair for Mayor Kasim Reed’s transition team.

Currently, she is the president of the Grady Health Foundation, leading a five-year $325 million capital campaign that is 98 percent toward its goal and will support the 120-year-old Grady Hospital, the state’s premier Level 1 Trauma Center. She is a founding member of the national, bi-partisan No Labels citizens’ movement – and also a board member at not only Emory University, but also at The Westminster Schools, where she has served for 19 years.

“I was taught that leadership was passion turned into action,” Lisa said. “So my passion for helping others and making sure that folks are never disenfranchised or taken advantage of was partly born out of that (Westminster) experience. It was helpful to me and helped establish who I am today. It made me stronger. It set a course for my personality and what I tried to accomplish in my life: Do a good job, leave every situation better than I found it, regardless of how difficult it might be to navigate the path.

“So I am grateful to the Westminster Schools – and even to those students who weren’t nice to me – because they helped me grow.”

Note to readers: Since this Moments column originally ran in April 2012, Lisa Borders has left the Grady Foundation to work for the Coca-Cola Co. as president of its foundation.

Next week in Moments: Bo Jackson, an Atlanta developer whose life changed in an instant when his 16-year-old son died unexpectedly.