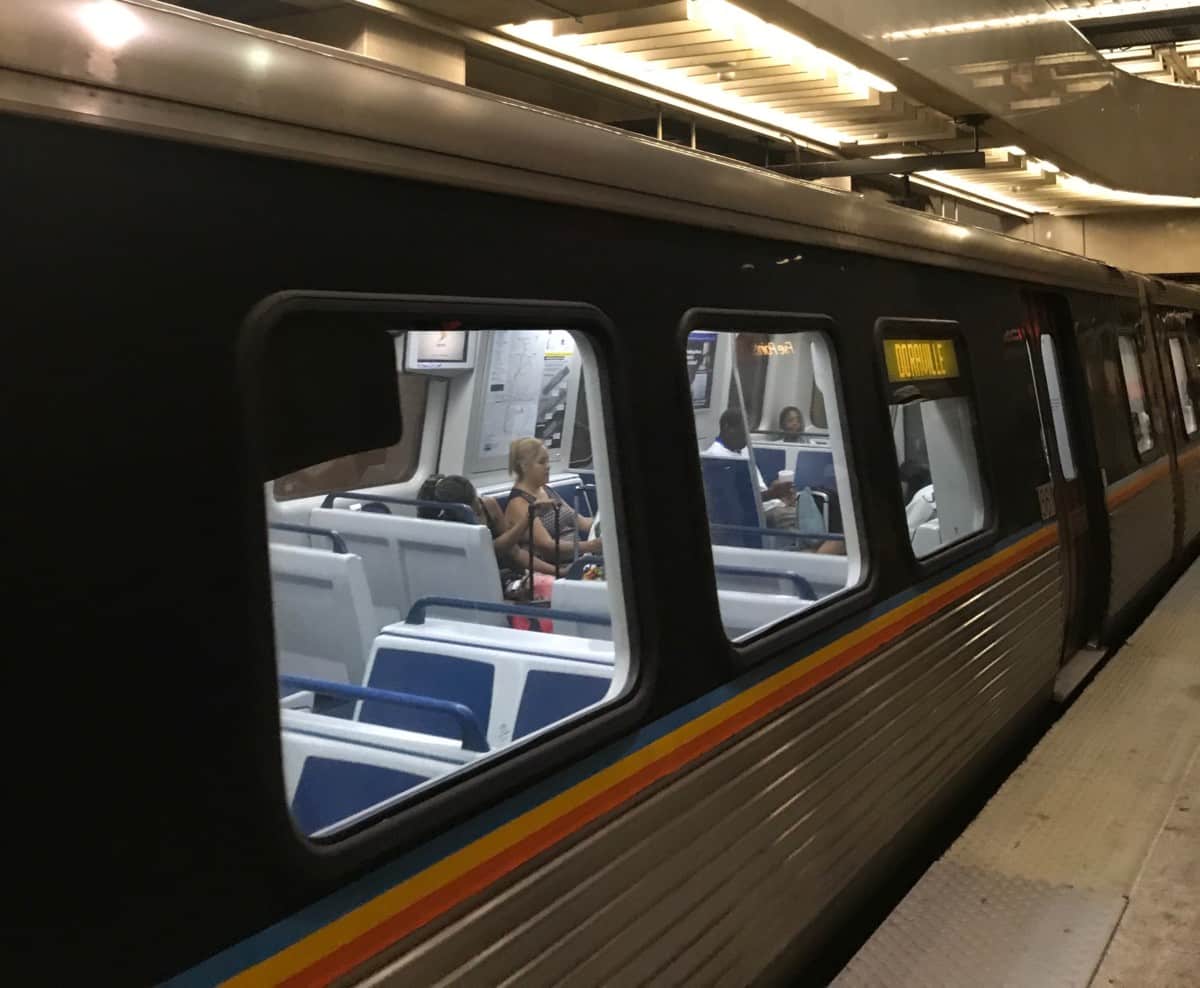 When Jenn Cornell cranked up her cello at the top of the Northbound train escalator at MARTA’s Five Points Station Monday afternoon, maybe a dozen or so passengers gathered round to watch or listen or take videos. Atlanta transit riders can expect more moments worth stopping for – be it music, dance, painting or other art – as the transit system kicks off a reinvigorated arts program. 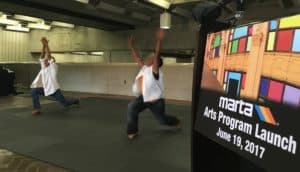 Covin Washington (left) and Jordan Scudder, from Moving in the Spirit, a youth dance program, perform ‘The Struggle Goes On,’ at MARTA’s Five Points Station during the June 19 kickoff of MARTA’s ‘Artbound’ art-in-transit initiative. (Photo by Maggie Lee)

“We want to attract more riders who have not used the system before and we want to give our existing riders a better ridership experience,” said MARTA General Manager and CEO Keith Parker. Parker attended the inaugural event at the Five Points Station as he and colleagues introduced the agency’s “Artbound” logo and system-wide art upgrade program.

“Think of a person who’s had a tough day at work – and then, instead of just the normal chatter you hear in the background, instead you’re able to look at some beautiful performance art, look at some dance groups, hear a nice choir, as well as see some incredible static art … murals, paintings,” Parker said.

The kickoff attracted perhaps a few dozen MARTA staff members and individuals active in the arts community. Many passengers shouldered through the crowd, but some stopped long enough to listen to a song or watch young performers from the Moving in the Spirit dance program. For folks not wearing headphones, the music was audible from the train platforms below. 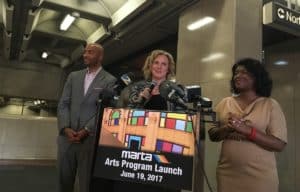 Parker pledged it will be one of the more meaningful art programs in the country. Art spending for the fiscal year that begins in July could come to some $2.5 million to $3.5 million, Parker said – up to 1 percent of the agency’s capital spending budget. The MARTA board approved the art spending last year.

“There’s no set amount each year and the board will still vote on any specific major project,” Parker said.

“We’re building an art-in-transit program that not only shows our customers they’re valued, but also enhances and reflects communities in which our stations reside,” she said. 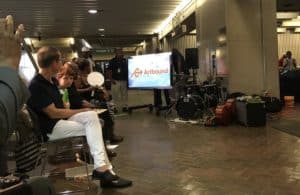 At a June 19 ceremony at MARTA’S Five Points Station, MARTA unveiled a logo to go with its “Artbound” art-in-transit initiative. (Photo by Maggie Lee)

An art commission will help select artists, and on occasion contests will be held to select art. Parker said there are to be several ways to participate. One of the first projects will be a commission at the westernmost train station, which will highlight the legacy of Hamilton Holmes as one of the first students to integrate the University of Georgia.

Artists for the first few projects will be selected by the end of the summer.

Lavonia Morris was one of those MARTA customers who stopped to video the cellist at work. Morris said there are some talented people in Atlanta who ride MARTA and who should be showcased. It will be nice for passengers too, she said: “Sit back and enjoy the ride.” 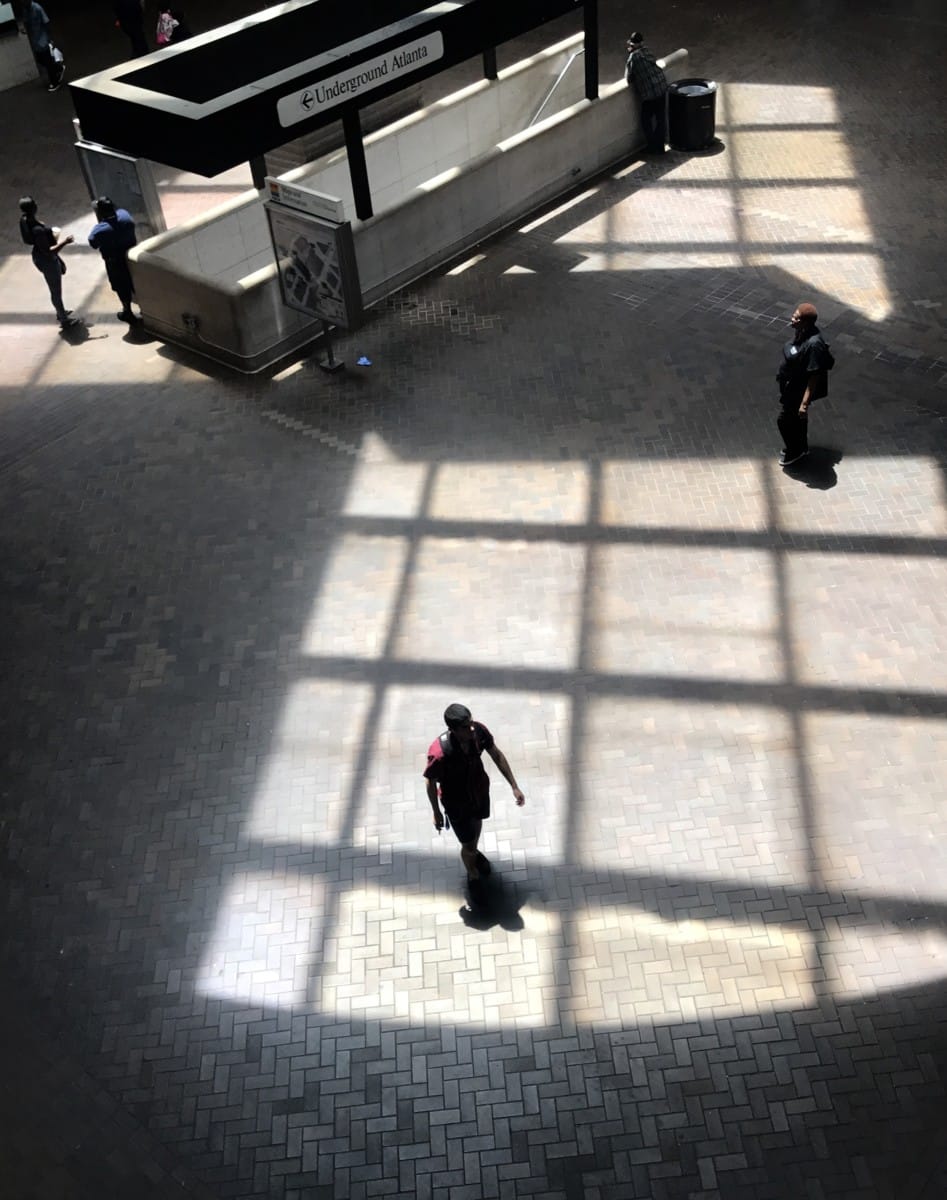 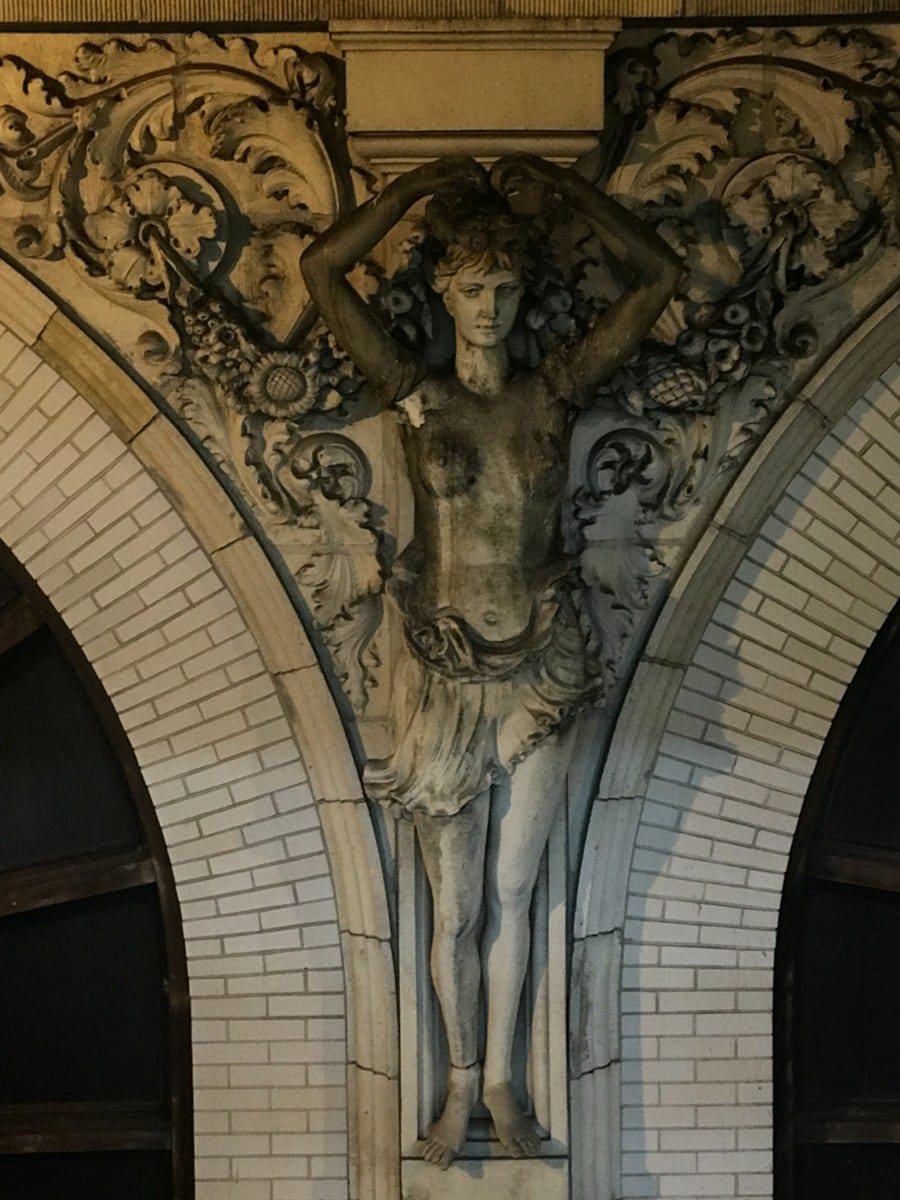 When MARTA was constructed, it incorporated some historic facades at the Five Points MARTA Station (Photo by Kelly Jordan) 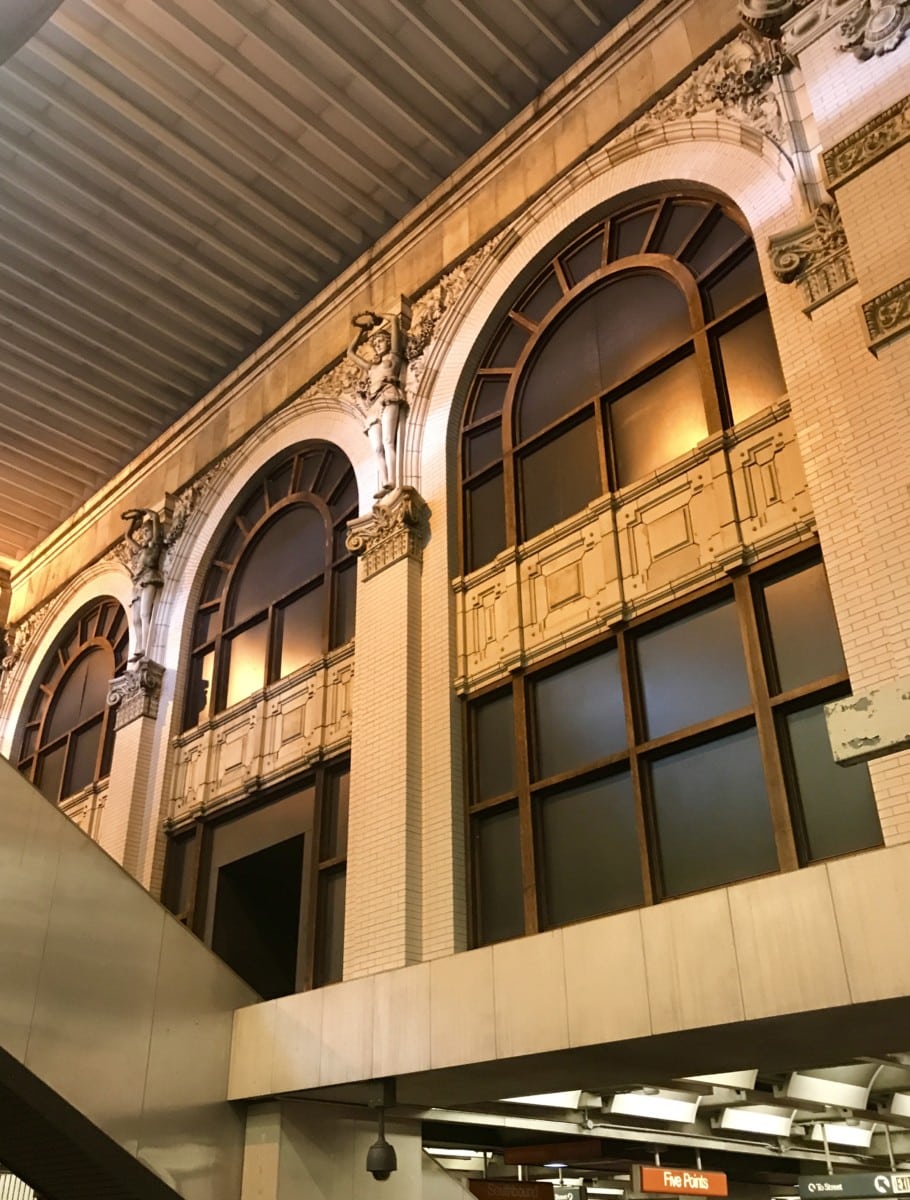 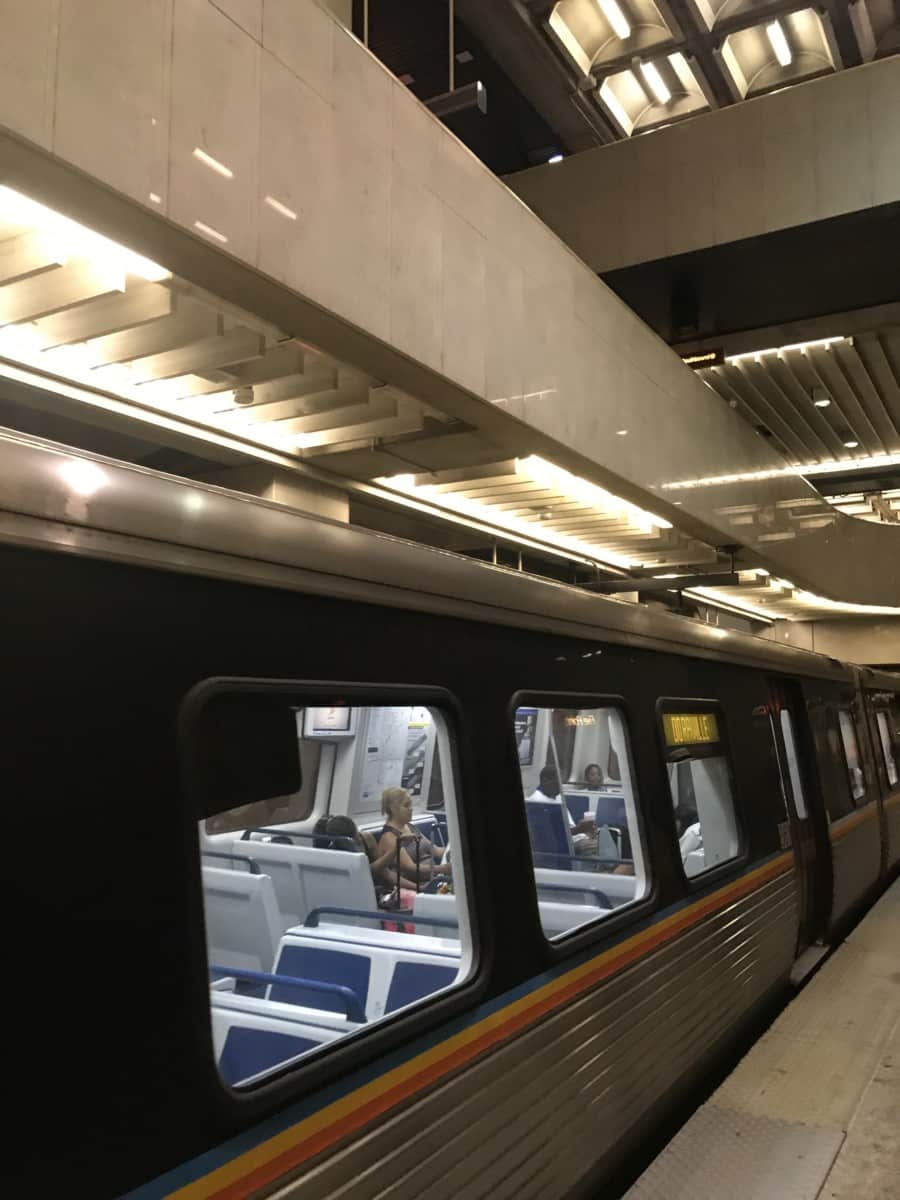 Previous Article
The 6th District election and the fate of the AHCA
Next Article
Atlanta’s Player One: An interview with Hi-Rez Studios’ Todd Harris